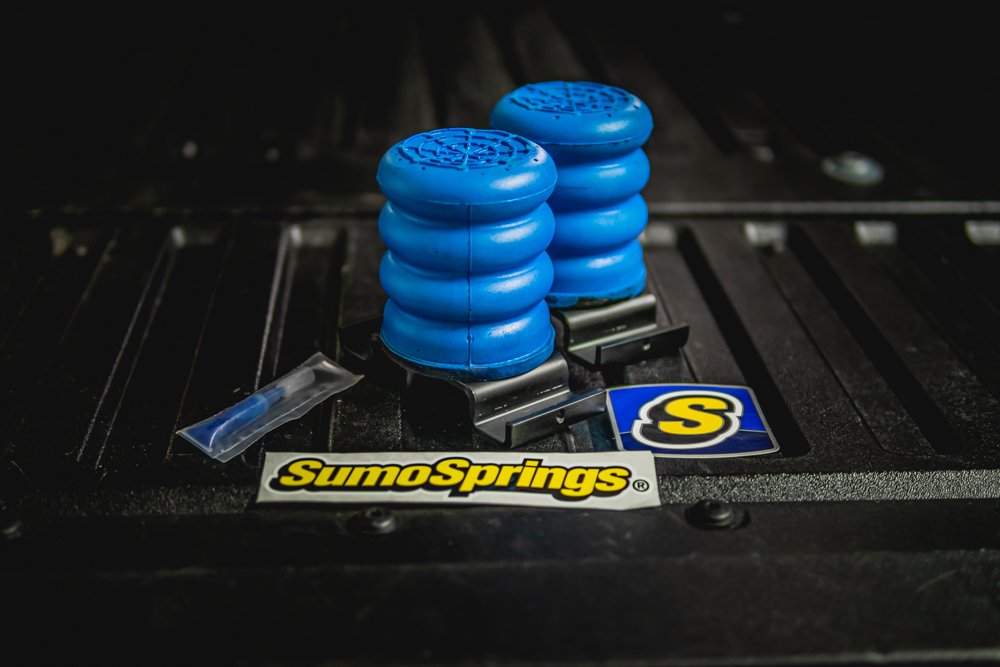 SuperSprings SumoSprings Bump Stop: A Great Aftermarket Bump Stop That Helps to Reduce Sag and Smooth Out The Ride For Your 3rd Gen Tacoma

It is no secret that the stock Tacoma leaf pack is pretty weak. Adding just a hundred pounds or so will cause the rear end to noticeably sag and reduce your Tacoma’s ride quality. If you’ve hit the stock Tacoma bump stops, you know how jarring and uncomfortable the ride can be.

Sure, you can install airbags on your truck, but they are quite a hassle to air up and down every time you load up the bed. Airbags also aren’t a good option for people who go off-road in their Tacoma because they are prone to punctures.

The easiest and most maintenance-free way to support your truck’s rear suspension is to install some upgraded bump stops. SumoSprings are just that; a drop-in replacement for your Tacoma’s terrible stock bump stops.

So What Exactly Are SumoSprings? 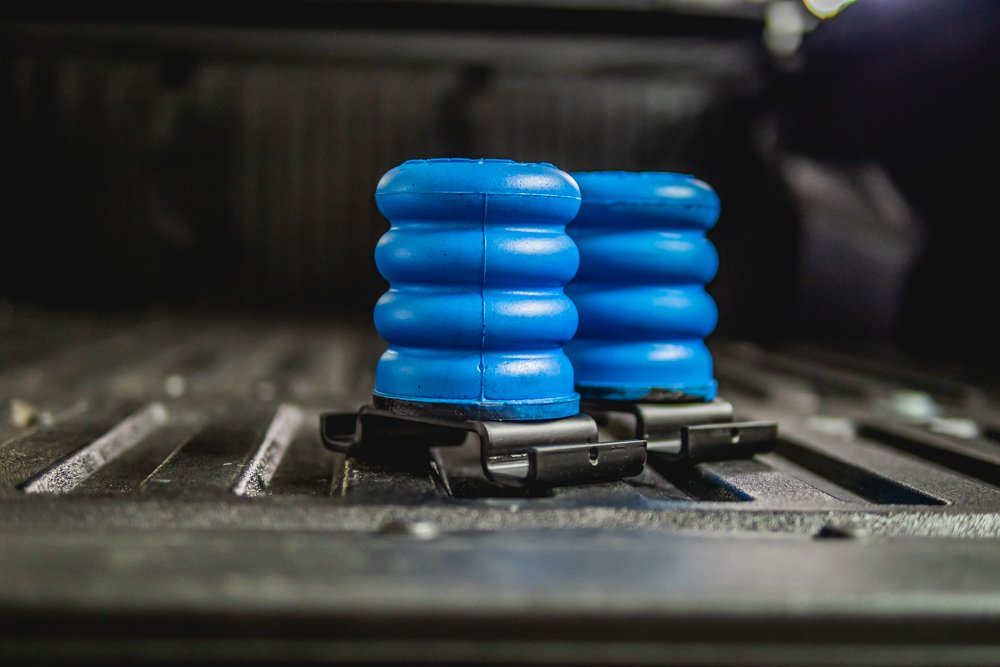 The SuperSprings website describes them as “a patented suspension product designed to enhance load carrying ability, stabilize sway, and improve overall driver control and ride comfort.” They have a progressive spring rate, meaning they become stiffer the more the further they are compressed.

They come in a few different configurations with different height, diameter, and density to support varying amounts of load. They are rated by how many pounds of pressure it takes in order to compress the spring to 50% of its height.

In this install and review, I am using their lightest (blue) configuration, which is rated for 500lbs, since I have an empty bed with my current setup and mainly wanted them as an upgraded bump stop rather than a load-bearing product. 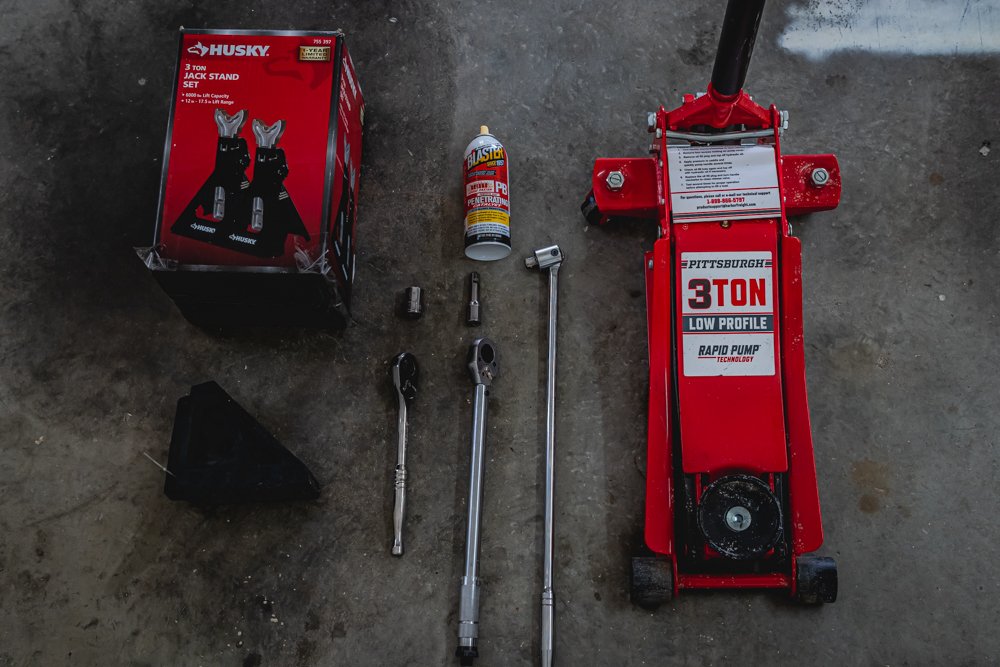 This install is pretty straightforward, but your install may be slightly more involved depending on the setup of your truck.

If you have a completely stock truck with no lift in the rear, then you will likely need to jack up the rear end of the truck in order to lower the rear axle to fit the bump stop in. If your truck is lifted, you will likely be able to do this install without jacking up your truck.

More on this later.

To Jack or Not to Jack

In my case, I have a 2” lift on my truck, so I was able to fit the SumoSprings in without jacking up my truck. It’s worth noting that if your truck is lifted, the SumoSprings will not be touching the frame of your truck unless you order the extended version.

As I stated earlier, you will need to jack up the truck if your suspension is stock.

Although I didn’t jack up my truck, I ended up using the jack under the frame as a safety precaution in case the truck was to move for some reason. 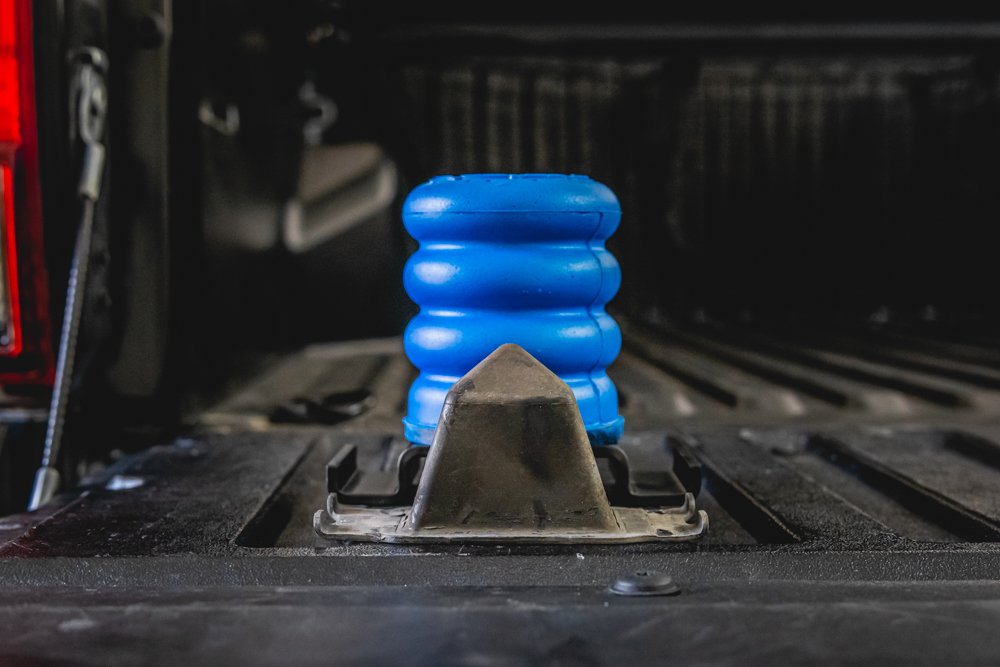 Before attempting to remove the stock bump stops, you will need to put tire chocks in front of your tires and pull the emergency brake so your truck doesn’t move while you are working on it.

To remove the stock bump stops, you will need to loosen the U-bolts on the rear axle. I recommend doing the full install on one side at a time. This means removing the stock bump and replacing it with the SumoSpring on one side, then do the same on the other.

It is a good idea to hit the nuts on the U-bolts with some PB Blaster to help make it easier to loosen them. After giving the PB Blaster a couple of minutes to penetrate, you can use the breaker bar with the 19mm deep socket to loosen the nuts. 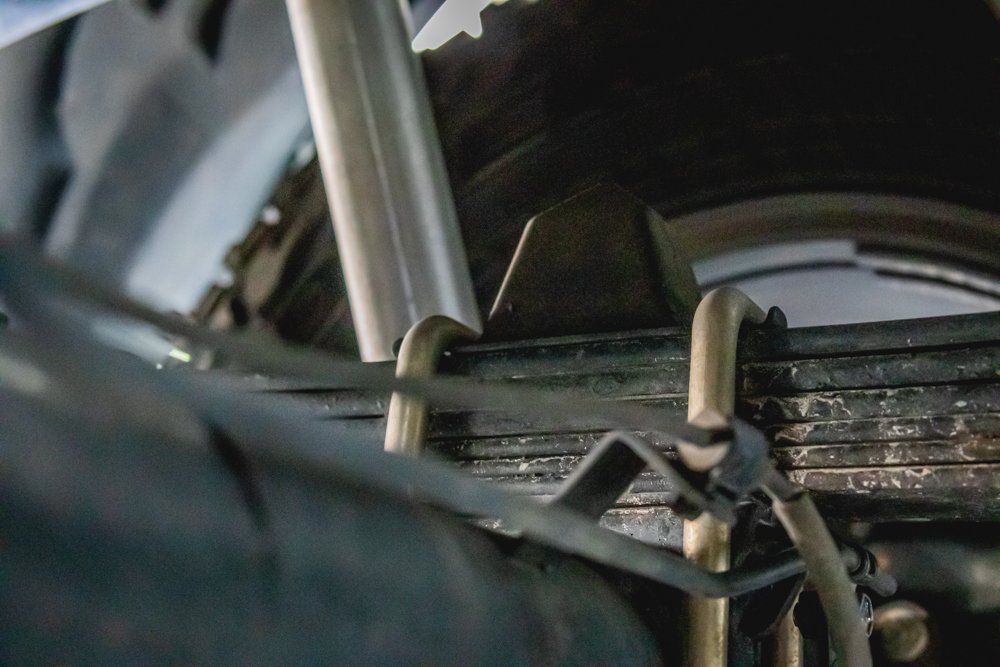 Once they’re loosened and moving easily, you can finish loosening them with your wrench or impact. You probably won’t need to completely remove the bolts to remove the stock bump stops.

When the U-bolts are loosened sufficiently, you should be able to push one of the U-bolts over the lip of the bump stop’s bracket and then angle the bump stop out of the other U-bolt to remove it. 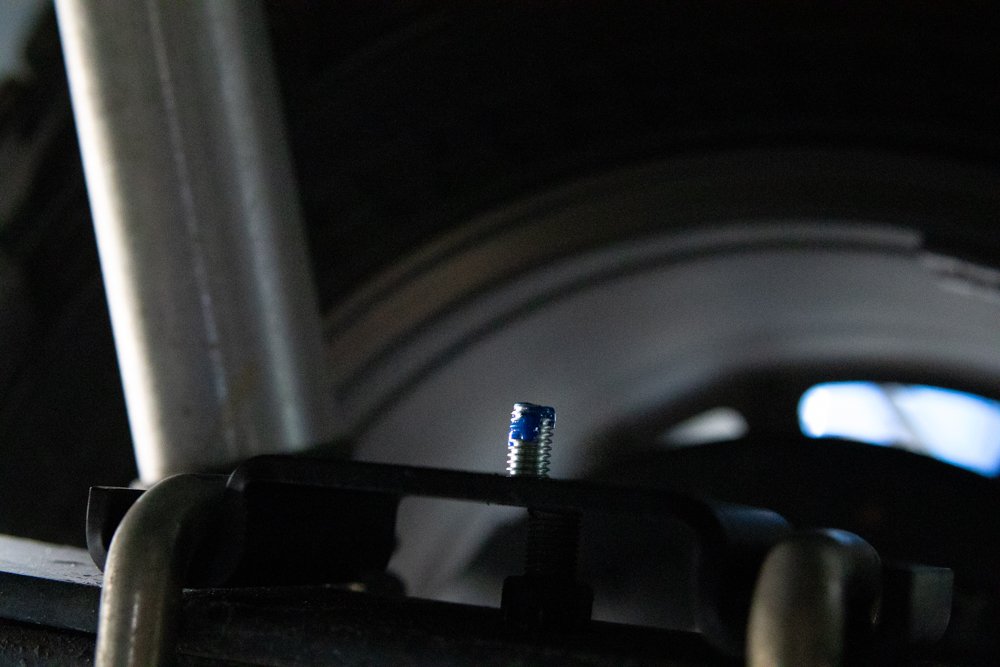 At this point, you should have loosened the U-bolts and removed the stock bump stop. Now it’s time to install the SumoSpring.

If you are doing the install without jacking up your truck, you can add the Loctite after installing the SumoSpring. 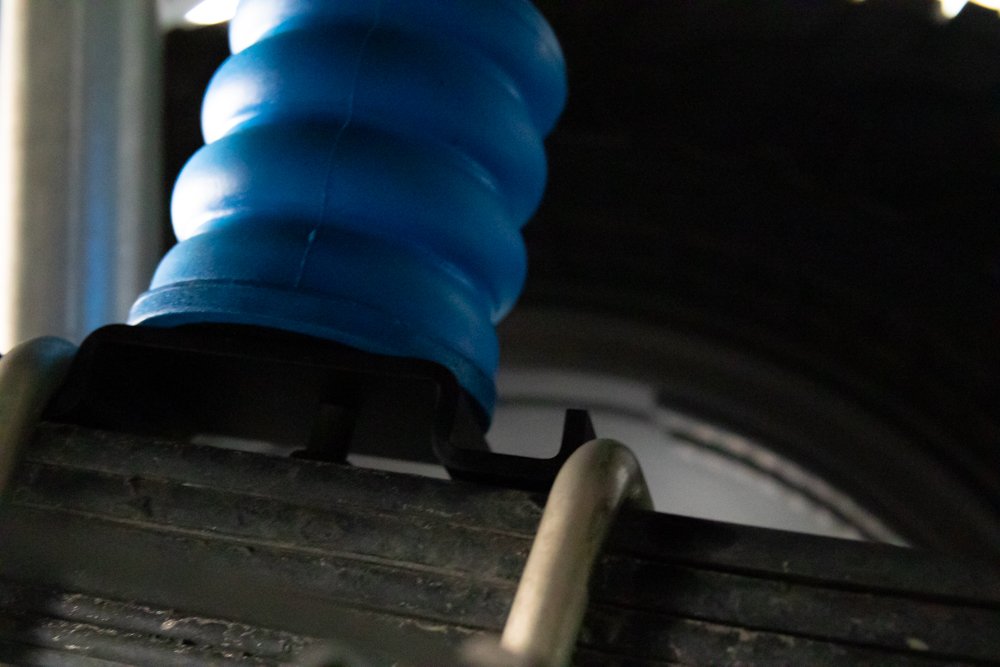 Now you are ready to install the SumoSpring onto the leaf pack of your Tacoma. To do this, simply angle one side of the bracket under one of the loosened U-bolts.

Once the SumoSpring is in place, you can tighten the U-bolts back down. 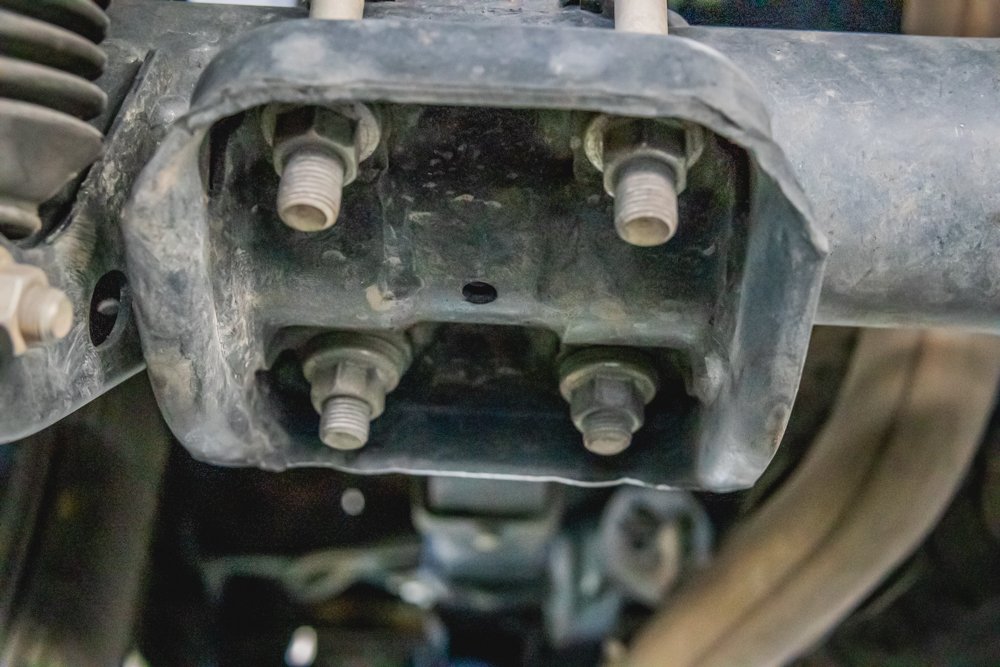 When searching to find the torque spec for the U-bolts, I ran into some controversial answers.

What is the Torque Spec on Tacoma U-Bolts?

I believe a previous version of the Tacoma manual had the U-bolt spec listed at 37lb-ft, which is ridiculously low. Some have speculated that the manual had the numbers backwards and it really meant to say 73lb-ft.

I have since seen an updated diagram that lists the specification at 50lb-ft. In my opinion, this still seems a little low. Some aftermarket leaf packs and add-a-leaf (AAL) instructions have the specification all the way up to 120lb-ft.

For my peace of mind, I torqued the bolts down to 80lb-ft. This is the spec I used when I installed my Icon 3-leaf AAL, and I didn’t have any issues.

I implore you to check the specification manual for your specific Tacoma or ask your Toyota tech, but I think generally a range of 70-100lb-ft should be okay.

Now that your SumoSpring is installed on one side, you can repeat the process on the other side and you’re done. 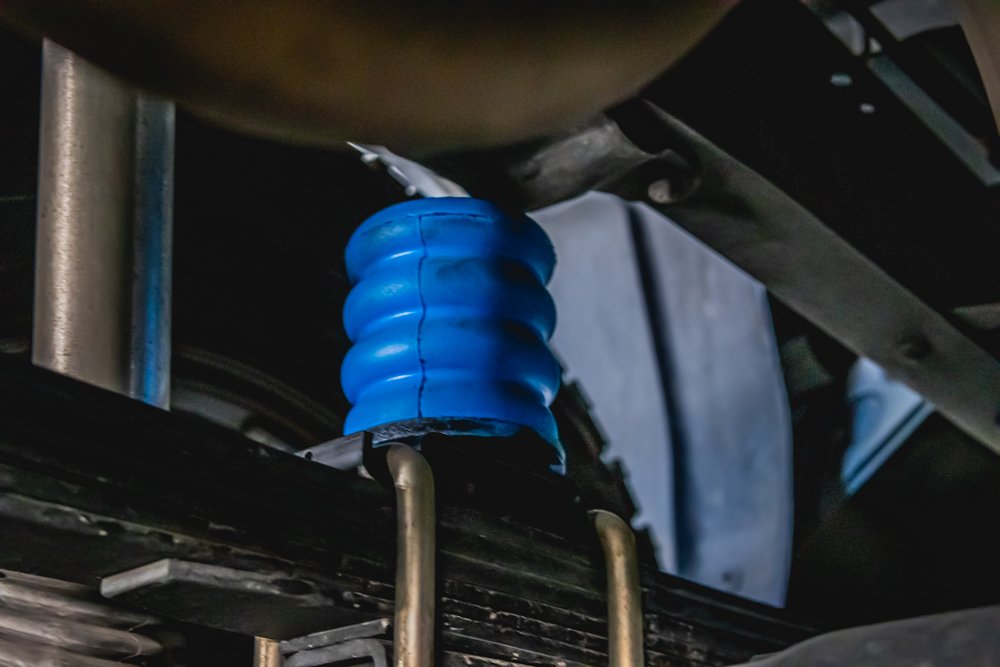 As I stated earlier, I mainly installed the SumoSprings as an upgraded bump stop and not necessarily to reduce sag since I don’t haul or tow often.

So far, I have noticed a pretty significant difference having the SumoSprings installed. Because my truck is lifted and I have the normal SumoSprings, they aren’t resting on my frame as they are intended to.

This means that they aren’t getting engaged unless my truck is flexed about 2” or so on either side. I am perfectly happy with this because it helps me to retain some articulation of my soft suspension while off-roading.

Regardless, the SumoSprings are still hitting the frame quite often both under normal driving conditions and when I’m off-roading. I have noticed that the SumoSprings seem to be “catching” the bed on its way down when going over large bumps.

Overall, I am very happy with this product and they are working perfectly for my situation. They are providing me with a smoother ride while off-roading and are preventing the nasty clunking that occurred when hitting the stock bump stops on the frame.

If you are interested in getting some SumoSprings for your truck, I suggest reaching out to the company to help decide which configuration will work best for your setup and intended use.

How do I choose the right one for my truck

If you are constantly loaded and towing often, get the black SumoSprings. If you have an overland build with common mods; RTT, Armor, Drawers, Etc. the blue SumoSprings should suffice. Check out a recent post on a quick guide to bump stops here.

You can visit tour website page at https://www.supersprings.com/tacoma/ where you can simply select your generation and we give you the recommendation!

I would encourage you to reach out to SuperSprings directly through email or on Instagram as they’ll know exactly what you need for your setup.

In my opinion, go with the blue ones if you don’t have any extra weight in the bed of the truck. If you have a bed rack, roof top tent, etc. or plan to tow heavy loads then you might want to consider the black ones.

Glad you found this one useful!