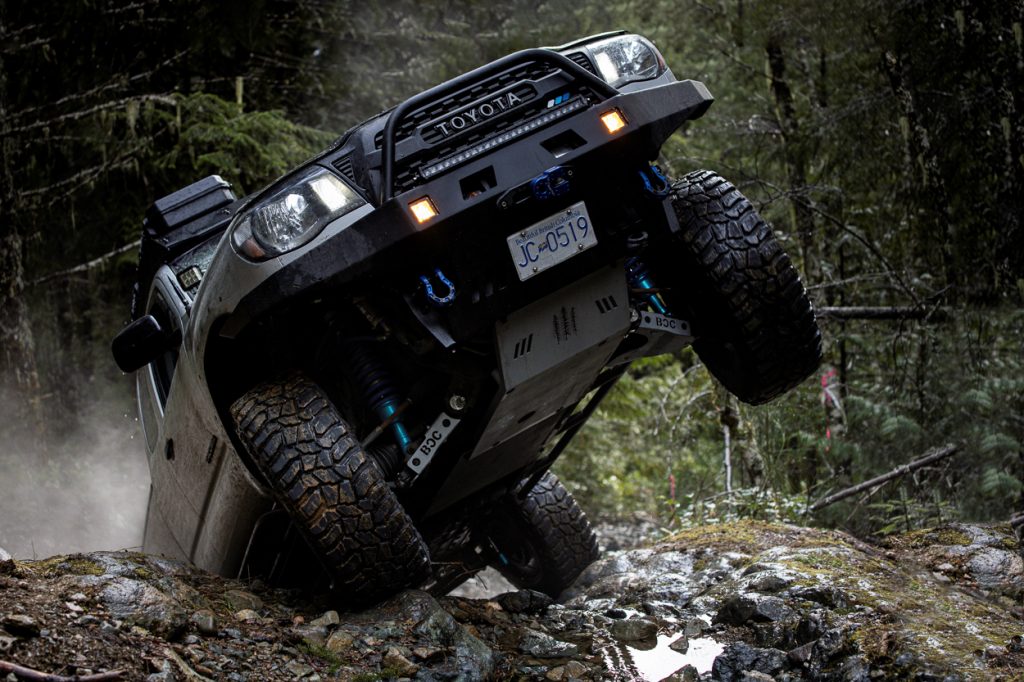 Trail Tacoma is kicking off its weekly truck build feature!

Moving forward, we’re going to start featuring the coolest rigs from all across the internet. These articles are intended to help the community showcase their trucks, bring awareness to participant social accounts, provide build inspiration and introduce the baddest rides in the 2nd & 3rd Gen Tacoma space. 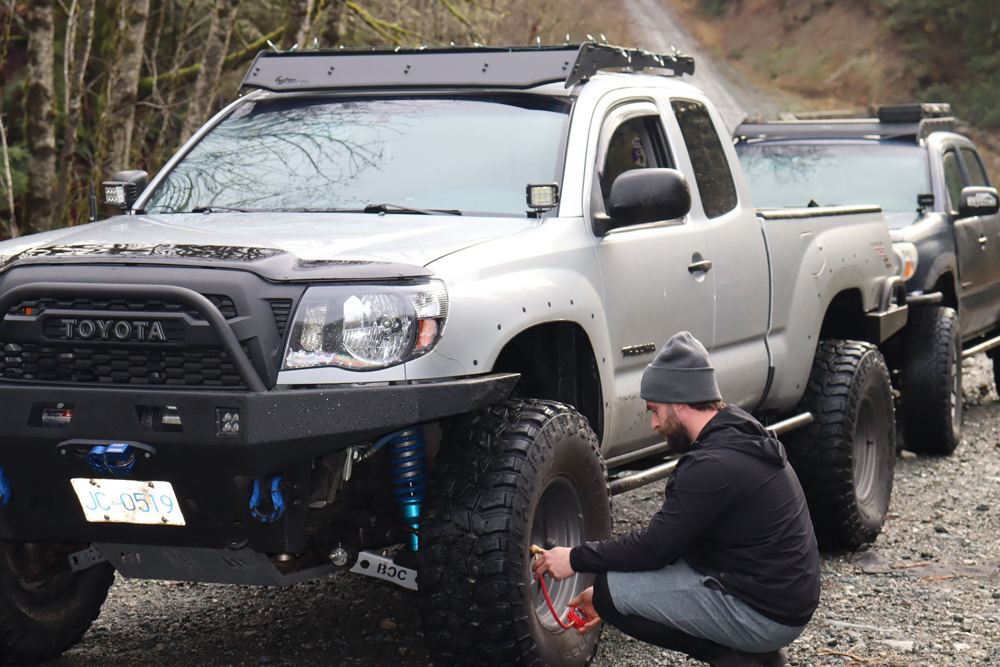 I’m 28 years old and live in Victoria, BC, Canada. I started my build about a year and a half ago, although I’ve owned my Tacoma for almost 7 years now.

I did a fair bit of off-roading when I was younger (17-20 y/o) and have just finally gotten back into it this past year and a half. It’s been a crazy year or so with mods on my truck, to say the least! It’s been a great journey so far and I’m looking forward to where it continues to go. 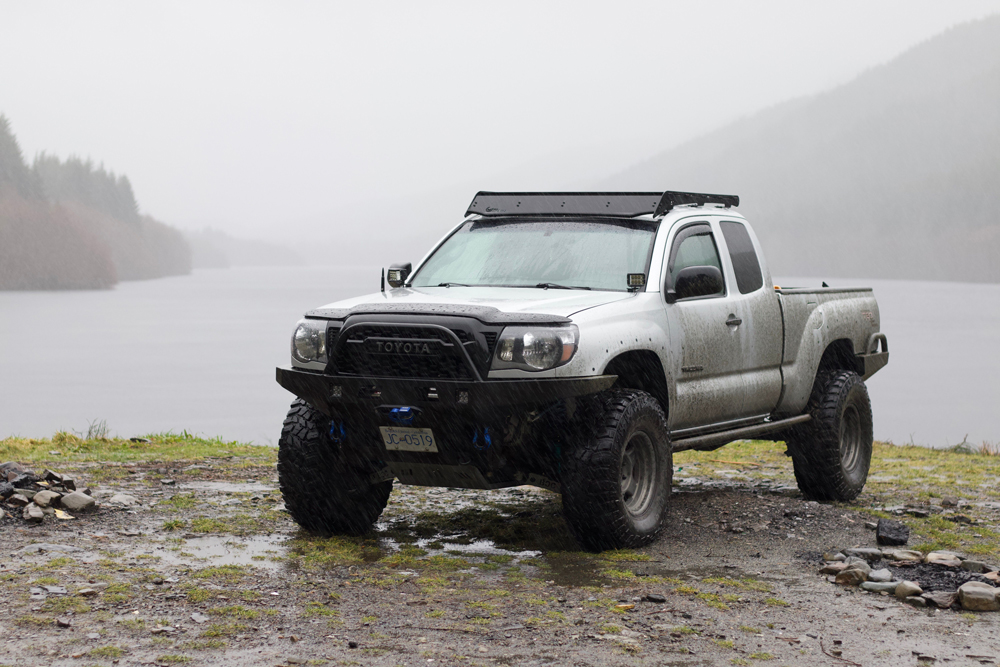 My truck is a 2006 Toyota Tacoma TRD Off-Road Access Cab with a 6-speed manual transmission. 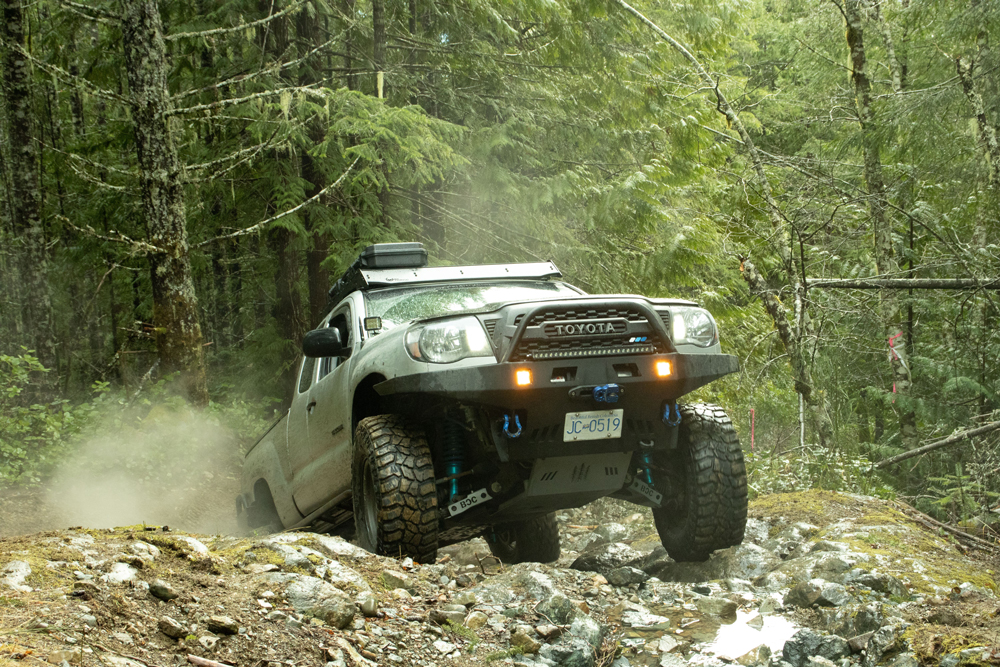 What Are Your Most Unique Modifications? 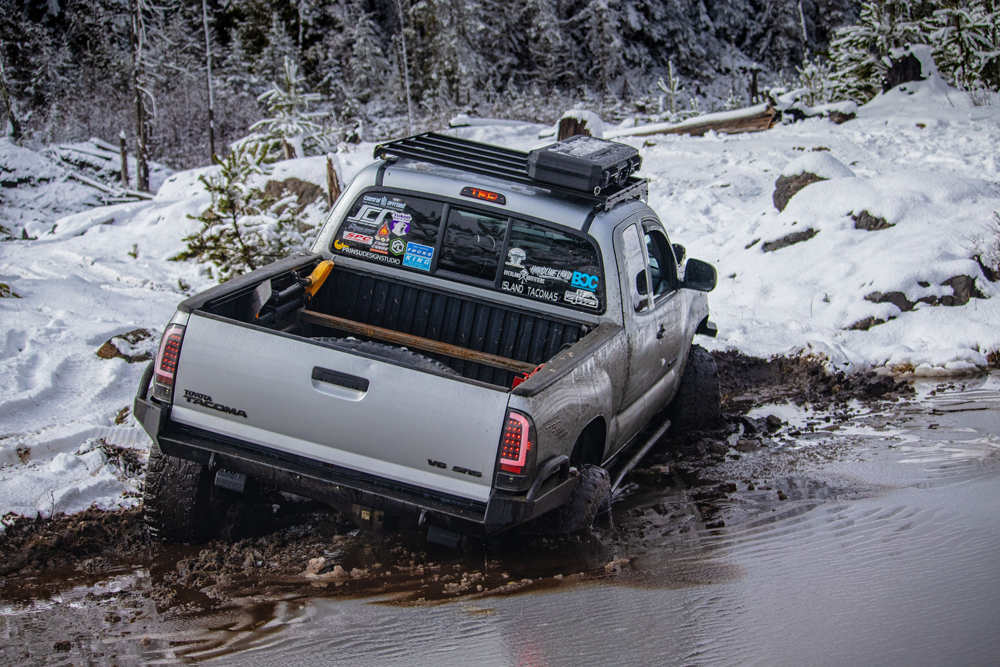 I haven’t done any crazy DIY mods yet, but have a couple of ideas for ones this spring/summer! So far, I’ve just done a few small things like re-routed my air intake into the cowl (called the “poor man’s snorkel”). I’ve made brackets for holding a shovel, ax, and hi-lift that are mounted in my bed.

I also made support brackets out of aluminum to reinforce my bedsides after trimming them to clear the 35” tires. My buddy and I built a crossbar for my shock towers that run through my bed and bolts into the top of each tower to help keep things rigid. I’m sure I’m missing a few smaller things, but that’s the majority of the unique mods. 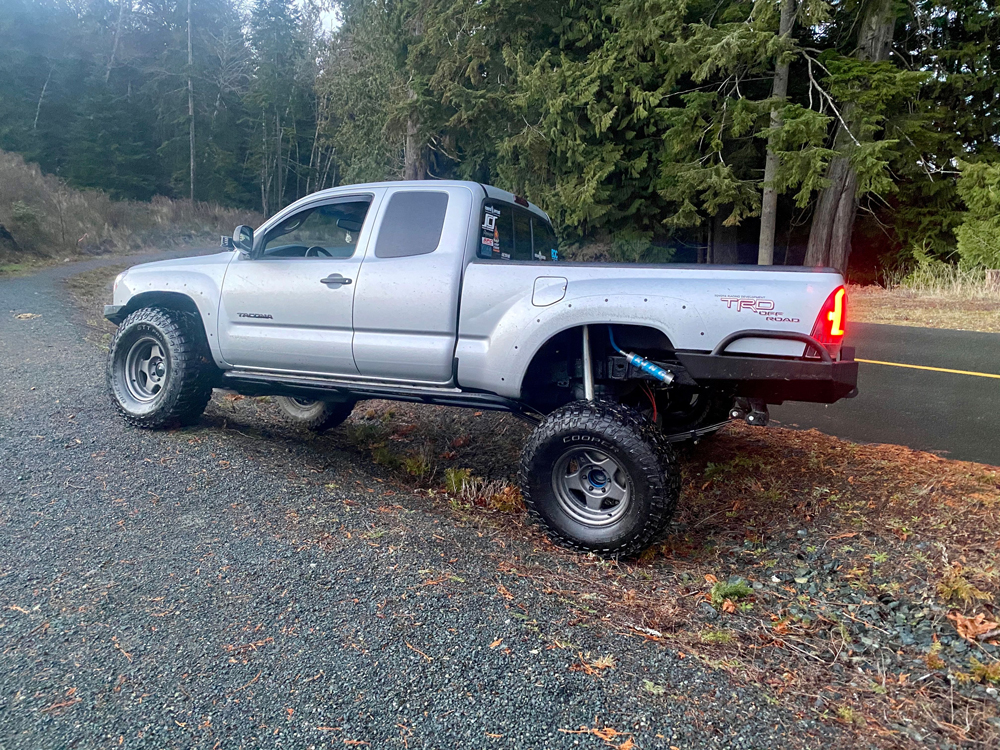 Favorite mod so far, hmm. That’s a really tough one! I love my current suspension set up with the King shocks and Archive Garage products. Running 14” rear shocks without going through the bed seems crazy to me on these trucks! But Archive Garage made that possible with their shock tower relocation kit and hammer hangers for added rigidness/allowing the leaf packs to flex properly.

Also, I recently added an ARB front air locker when I had my truck re-geared with 4.56 Yukon gears. The front locker is an absolute game-changer for off-roading! It opens up a whole new level of trail difficulty that I can now attempt.

Why Did You Buy a Tacoma? 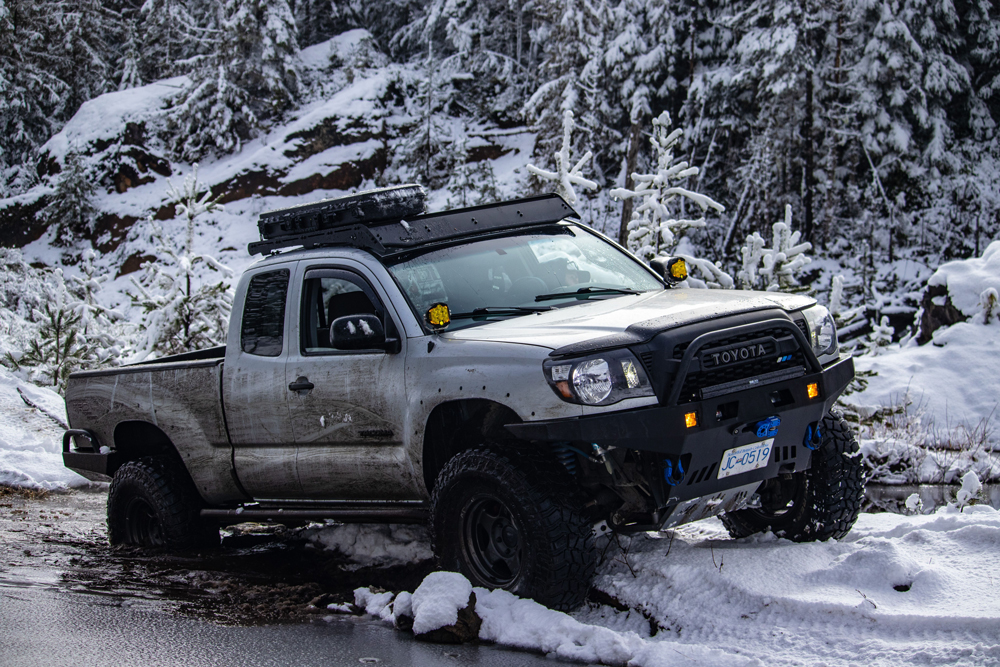 My first vehicle was a 1992 Toyota Pickup. I’ve loved Toyota’s since the day I bought that truck! When I bought the Tacoma I currently have now, I didn’t really have any intentions of building it up crazy or anything.

I just put some 33” tires on it and did a Magnaflow cat-back. But after owning it for 6 years and enjoying the truck so much, I decided I can’t see myself ever selling this truck, so why not do some cool stuff to it? And from there, I started researching like crazy and began the build!

I’m super happy with how the truck sits right now and have enjoyed every stage/mod of the build so far. It’s really rewarding to see the truck change and become more capable off-road when you do all the mods and upgrades yourself. Plus, that’s half the fun right?

What Have You Learned? 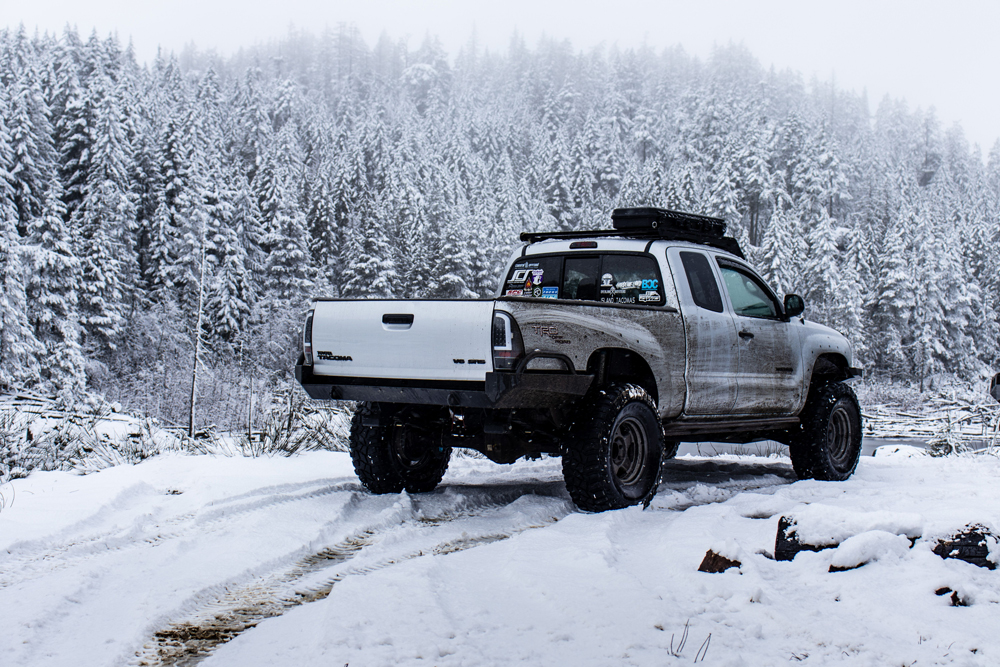 I’ve learned so much throughout my build so far. I’ve gone through a couple of different suspension setups already in just over a year. One big thing I’ve learned is you can’t always trust what is said in forums or social media.

It’s good to do research of course, and there is a ton of good info out there! But always good to get a second opinion or ask the professionals at off-road-focused shops. I’ve also learned that I can’t seem to go half-speed with hobbies like this. Once I’m into it, I’m all out!

The whole build process so far has been a huge learning curve for me because I didn’t know a whole lot about trucks or 4×4 builds when I started. But learning and teaching myself how to do everything along the way has made the whole process so much more fun! Being able to rip the front end of the truck apart (or the rear) and replace the suspension, steering, brake parts, etc. by myself is such a cool feeling to me.

I still remember the first time I cut some of the body off my truck (for the coastal off-road rear high clearance bumper) and how nervous I was to do it. Now, every time I cut or trim more off my truck, it puts a huge smile on my face because I know something better and cooler is going on!

Would You Do It All Over Again? 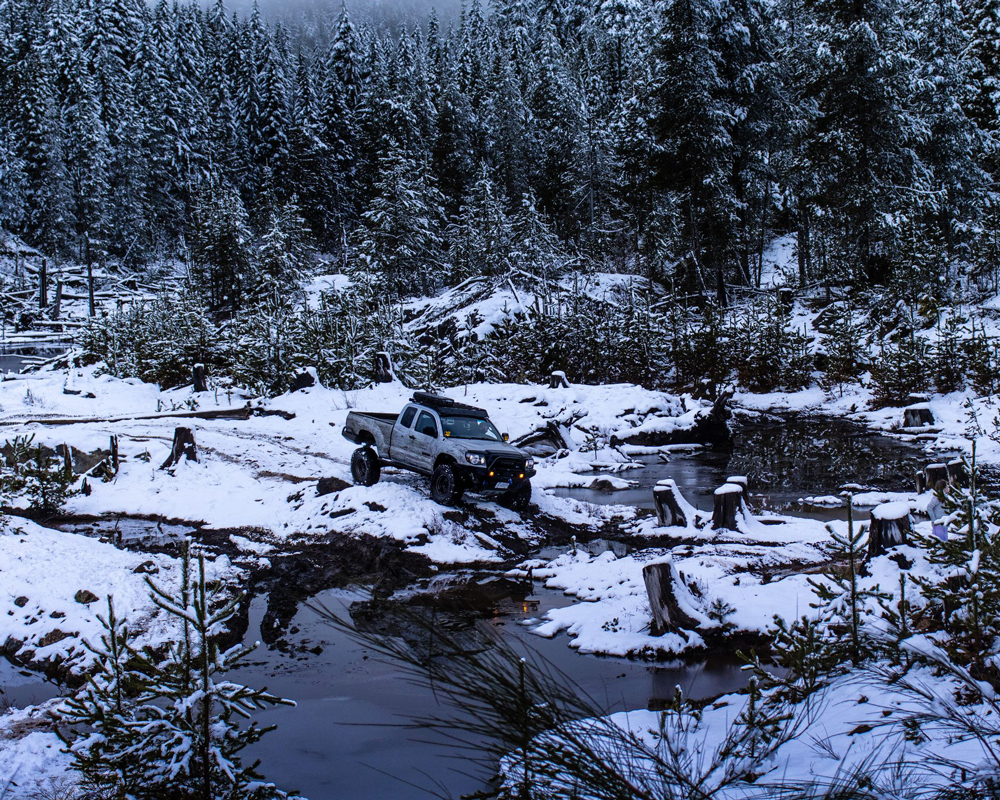 I’d 100% do it again and I plan to! My plan right now is to just basically enjoy the build I’ve done on this Tacoma so far until it’s toast.

Then, when the time comes, I’d ideally like to buy a 2012-2015 Tacoma and do another build on that truck. Reusing some of the mods I’ve done on my current one and also going a bit different route on some parts (front suspension mostly).

What Would You Do Anything Differently? 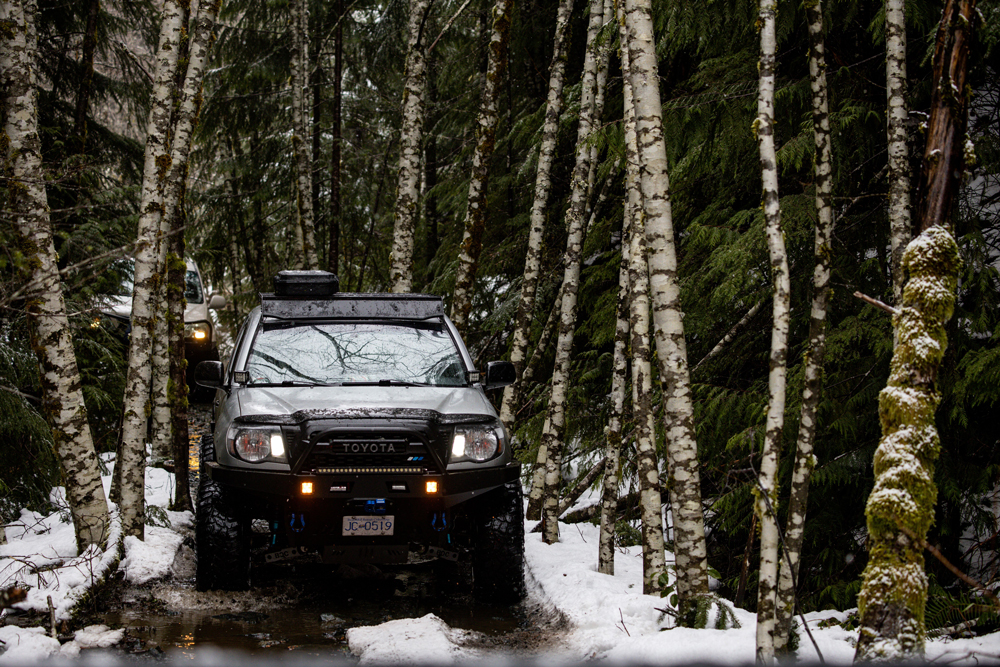 I think the one big thing I’d do differently if I were to start a build again would be to go slower and enjoy the process more. Don’t get me wrong, I’ve enjoyed every bit of this build, but there were definitely times where I feel like I had too many big things happening at once.

So I wasn’t able to compare and really see the difference each mod brought to the build for its off-road capability. I also wish I had gone LT or even SAS’d the truck instead of going with a maxed-out mid-travel setup. But that’s all going to be part of the next build!

What’s Your Favorite Place to Wheel/Travel? 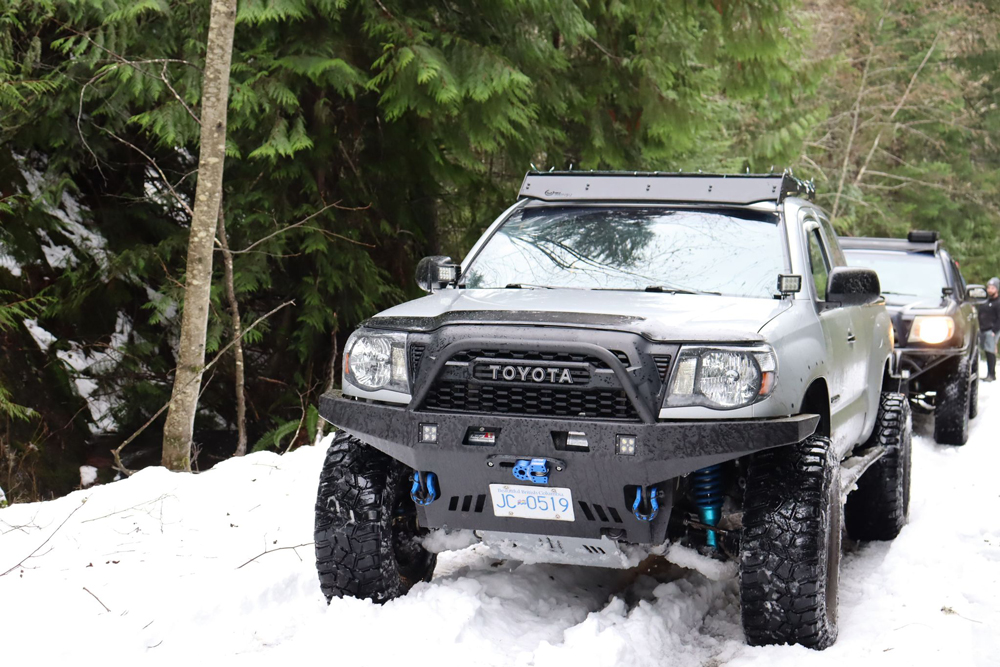 Unfortunately due to the virus this past year, we haven’t really been able to venture too far from home to explore more places for off-roading. But on the other hand, here on Vancouver Island, we have a ton of awesome wheeling!

Lots of great trails 20-30 minutes from where we live so we definitely hit those a lot. We’re hoping to at least get over to the mainland of British Columbia this summer to explore some more trails over there. Definitely want to plan a Whipsaw trip which is a popular trail in BC.

Do You Have Any Other Hobbies? 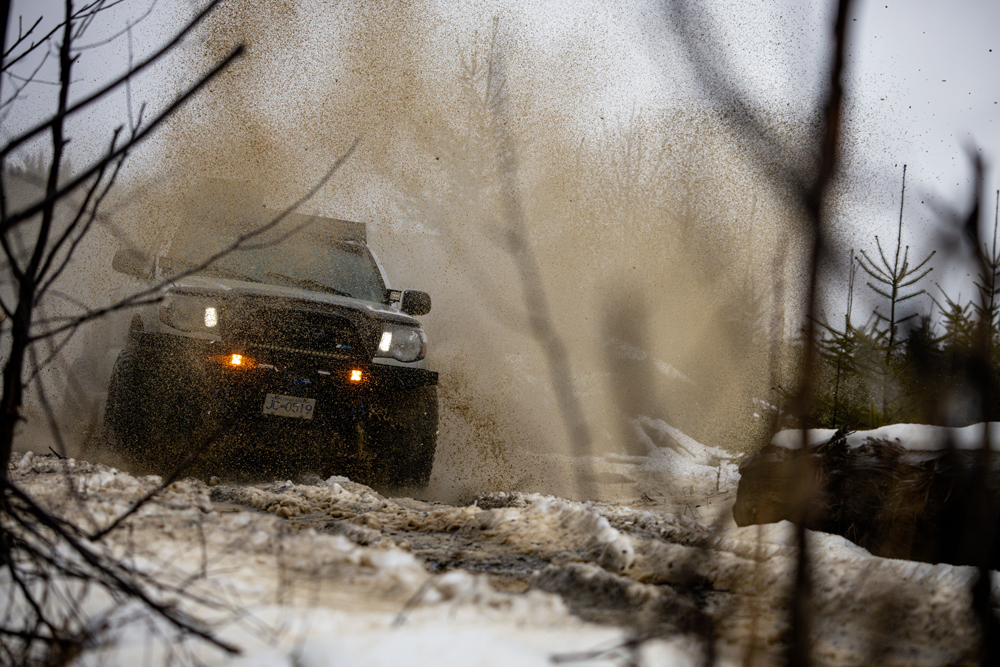 My other hobbies? …anything outdoors — hunting, fishing, hiking, camping, golf, swimming, you name it.

But for me, it’s all about just getting out and exploring our beautiful backcountry.

Any Advice for New Owners? 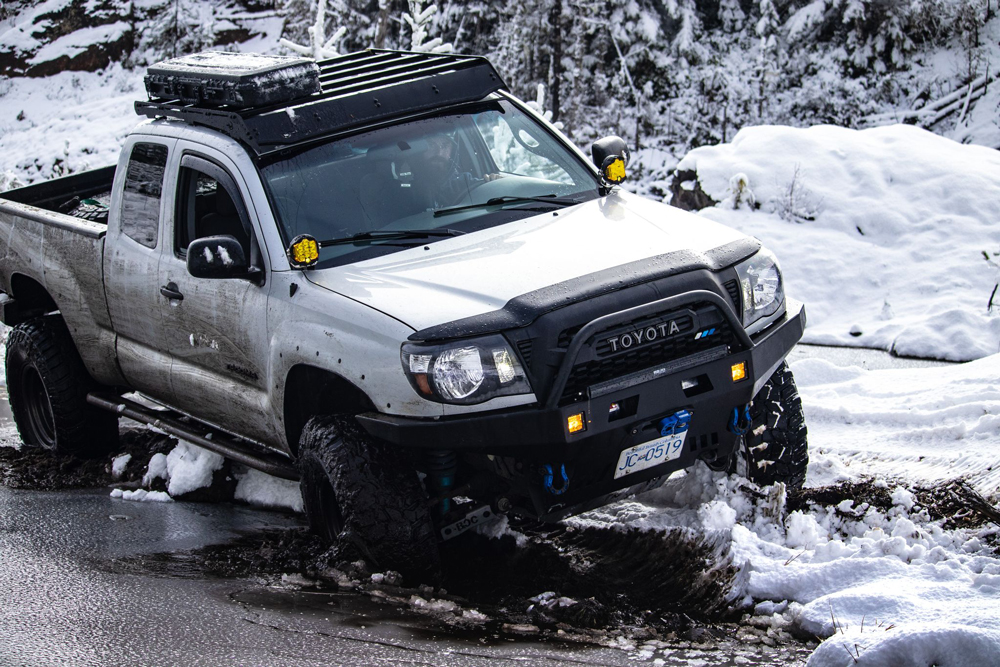 For someone looking to start modifying their rig, I think the best advice I could give would be to do your build how you want to. Don’t feel like you have to do a certain mod just because it’s popular among other enthusiasts.

At the end of the day, all that matters is that your build makes you happy! Don’t worry about what others say and don’t take it to heart. Also, take your time and enjoy the process of your build! Honestly, half of the fun is changing things up on your rig and testing it out.

What’s The Inspiration Behind Your Build? 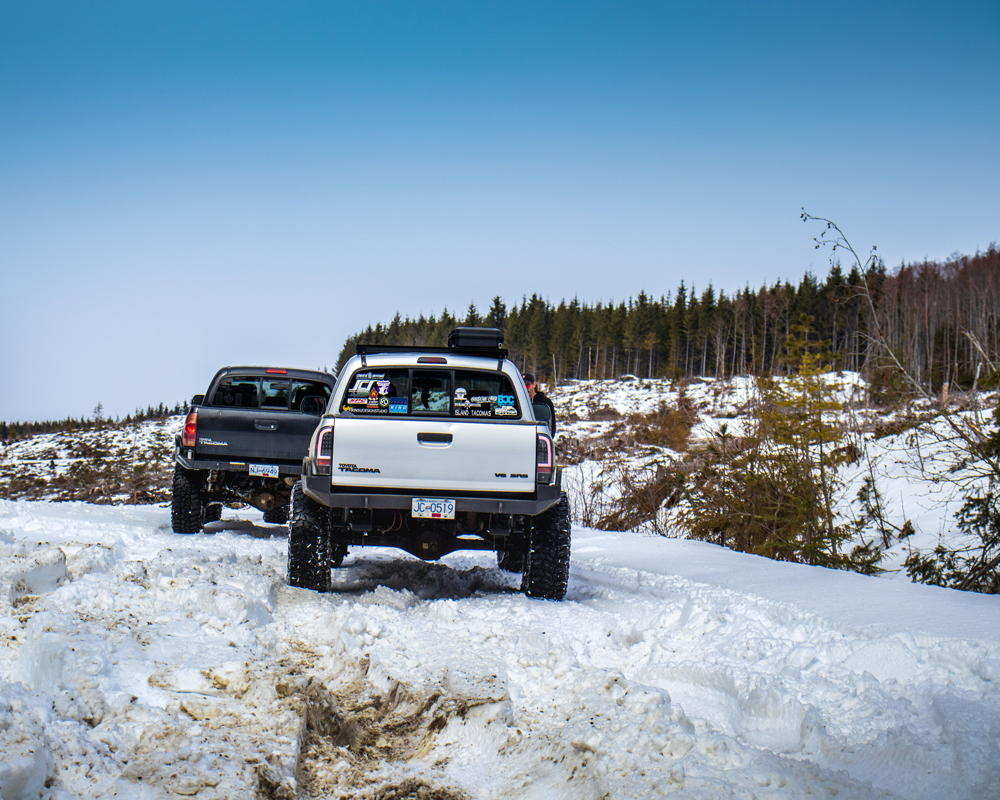 I look up to and I have a couple of guys/builds I go to for advice or otherwise.

Braeden (@overlandoutfitters) with his sick 2nd Gen Tacoma LT build. He and his wife also own a local off-road shop here in BC! I’ve done a lot of my business for truck parts through them in the past year. They are super knowledgeable when it comes to off-roading and Toyotas in particular. I’ve also been lucky enough to have the opportunity to go out off-roading with them as well which was a blast! Looking forward to getting out with them more this summer, hopefully.

Also, RandyFab (@4lo_pro) has another awesome 2nd Gen Tacoma build. Access cab like mine but he bobbed the rear so it’s about 14” shorter! On 35s, dual locked, custom front and rear bumpers to get great approach/departure angles. I find myself messaging Randy a lot with questions regarding our trucks and he’s always so friendly and willing to answer questions. Guys like this are why the off-road community is so great, and part of why I’ll always answer anyone’s questions I get on IG. I feel like it’s the least I can do to give back and help others out!

One other build I really admire is @thatgoldentaco. He’s a fellow Canadian over on the east coast with a really cool 2nd Gen Tacoma as well. Similar build to mine but a bit more custom and some extra bells and whistles. He and I chat a lot via Instagram and he’s helped me out a ton with my build so far. Again, always willing to answer questions or give me his opinion on certain things anytime! Would be awesome to get together sometime and go out for a good wheeling sesh.

What Would You Recommend for Off-Road/Overland Accessories? 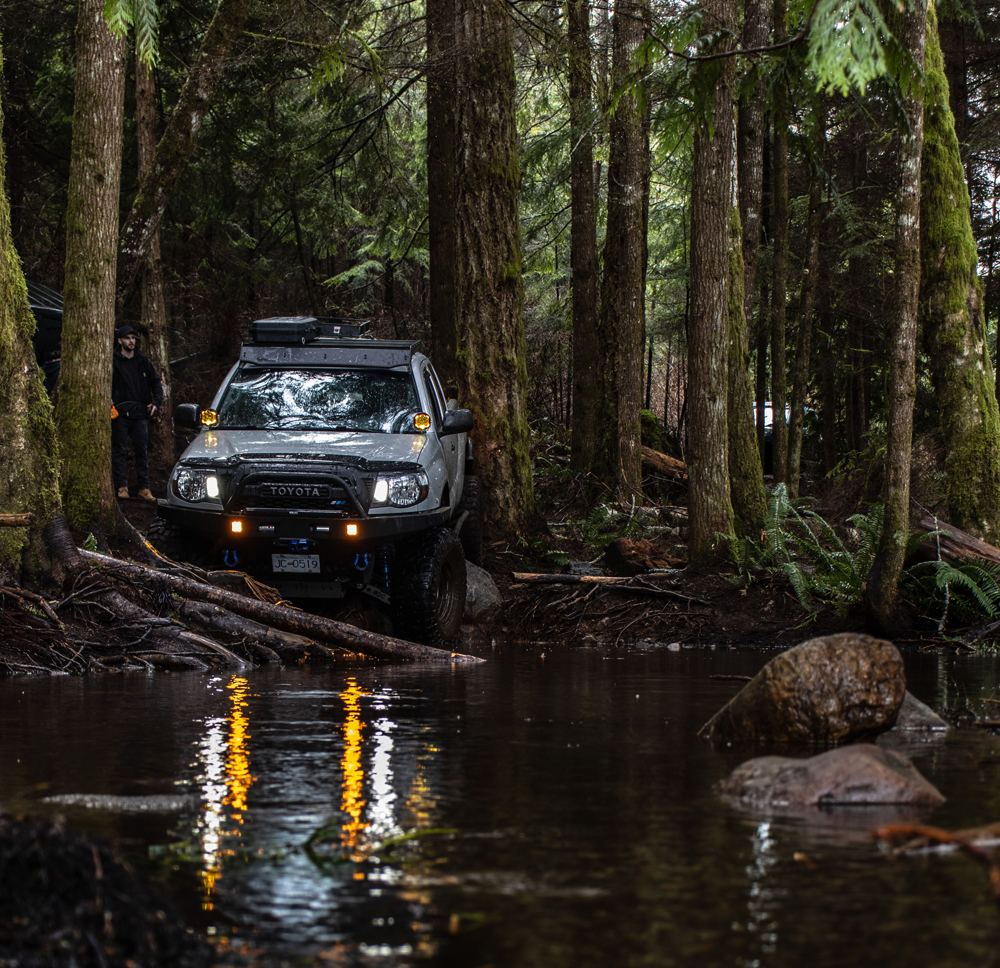 A few things I’d strongly recommend for anyone looking to do any kind of off-roading (especially solo) would be a winch, spare parts (cv axles, tie rods, wheel hub assembly), a hi-lift (or some other kind of jack you can use on the trails), good tools, spare tire (at least one), and knowledge on how to do trail fixes.

Always good to carry a radio and have some form of navigation whether it’s a backroads map book or a phone app like Gaia. Nothing worse than having something break on the trails and not being able to fix it or get home!

What’s Next for Your build? 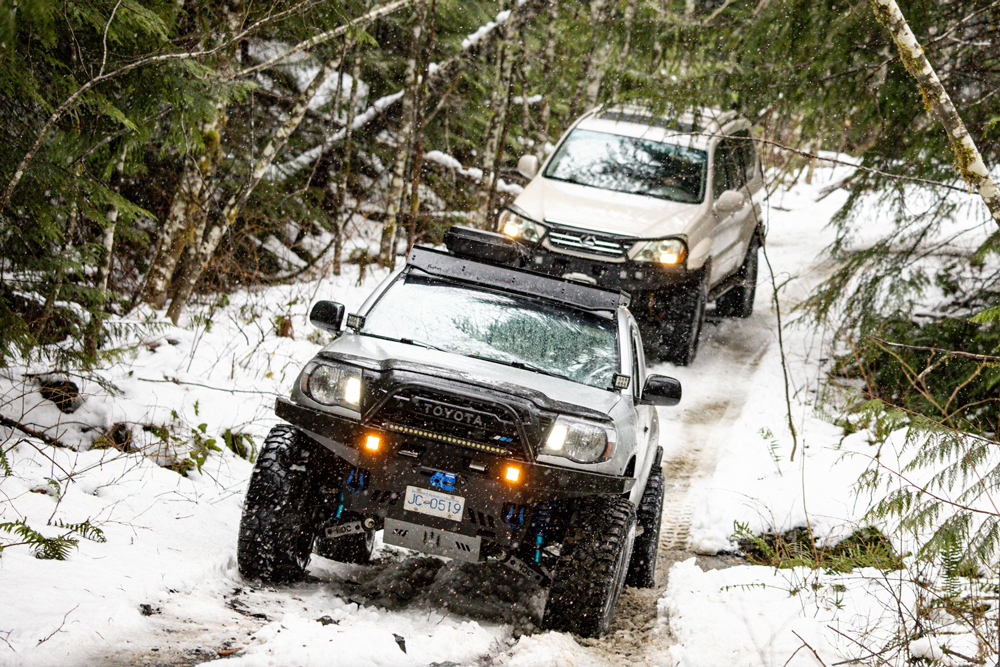 Honestly, most of the big mods are done on my truck now. At this point, there are just some smaller things I’d like to add in the coming months. Like a rear diff skid, some rock lights (which I have, just haven’t had time to install them yet), and some more off-road lights.

Playing with the idea of painting my truck later this summer, but that’s still up in the air right now. Besides that, I’m really happy with the truck! Hasn’t let me down off-roading yet, and it continues to impress me with where it’s capable of going. Basically just going to drive it until it falls apart and fix things as they break until then. After that, buy a 2.5 Gen and start a new build all over again. 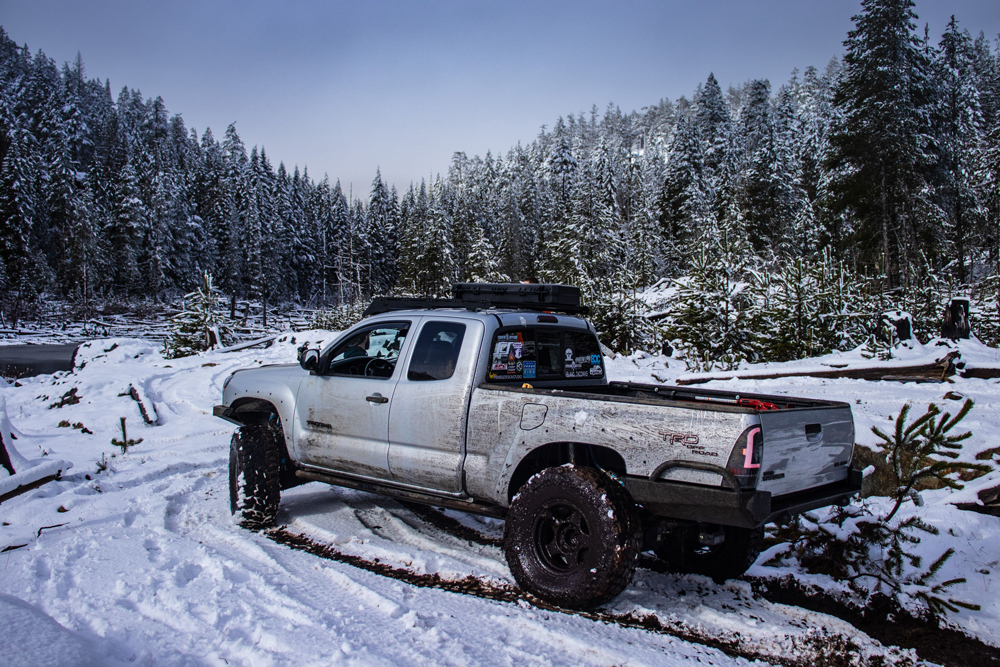 Building trucks is a lot of fun and I feel like I’m always learning something new. It’s definitely not a cheap hobby, but if you enjoy it, the cost shouldn’t matter right? I love having a truck that can take me anywhere I want to go. Point the truck in any direction and it’ll make it there!

I’ve really enjoyed the build of my Tacoma this past year and a half and I can’t wait to see where it goes from here as well as the places it’ll take me. Thank you for letting me do this interview, I had a lot of fun writing this. It brought up a lot of good memories too. Check out my Instagram page for some cool content of my Tacoma build and adventures. Always happy to answer any questions someone may have as well!

I guess you could say I have a bit of a Toyota addiction. I own a 3rd Gen 4Runner and a 2nd Gen Tacoma. I've worked at a couple of different Toyota dealerships over the years which helped me learn a ton about everything Toyota. When I'm not working on trucks I'm clocking in some trail time with my friends!

This truck is such a clean and inspiring build, very good work