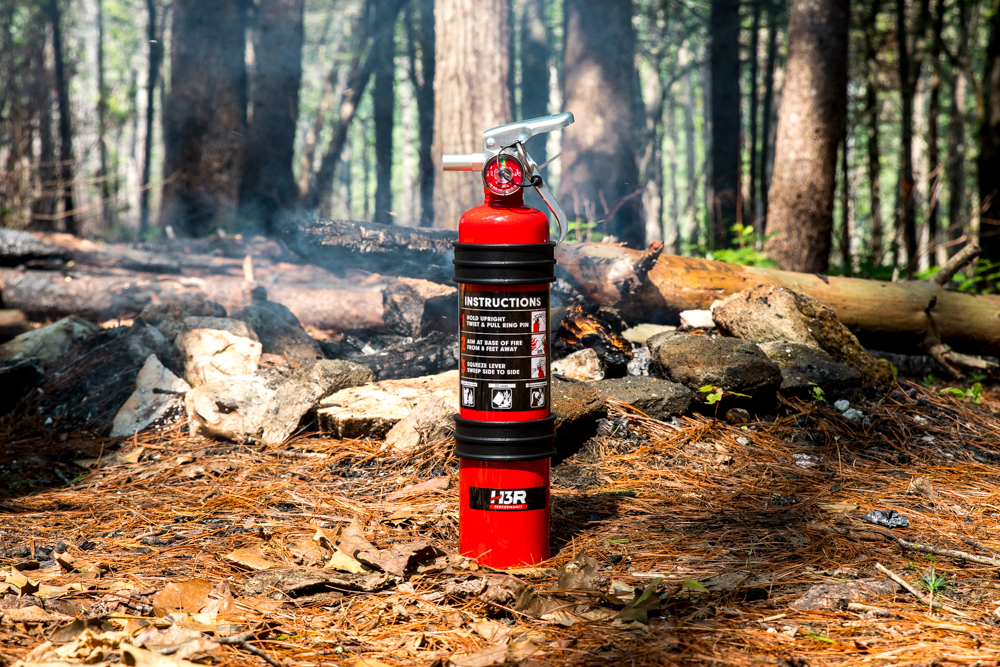 Let’s face it. In an ideal world, you’ll never need a fire extinguisher. It’s the last thing you’ll ever want to use.

These aren’t things you use to put out your campfire at the end of the night. Even though that’s what I did to test the H3R Performance MaxOut Fire Extinguisher. 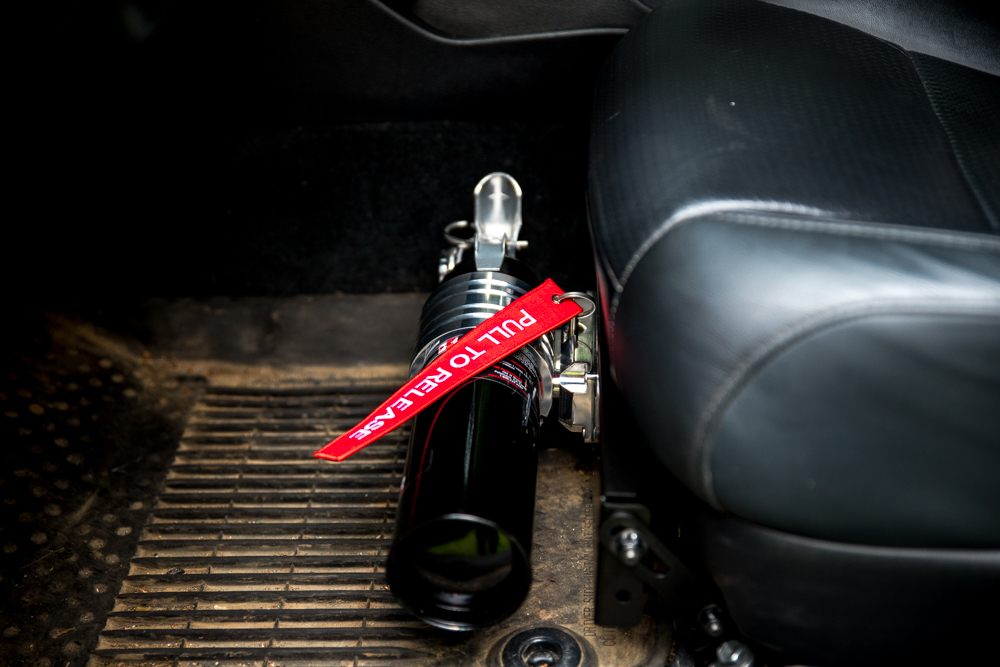 I tested my extinguisher on a campfire for two reasons. One, because I like my stuff too much to light it on fire. And two, to show the aftermath of using a fire extinguisher (it’s messy, and it required a lot of clean-up). If you’re using a fire extinguisher, it’s because something that wasn’t supposed to catch fire, did. It could be your Tacoma, your tent, a friend, the forest, a home, or even a Jeep. Just kidding! Jeeps are fine, if you’re into… umm… Never mind.

No matter what the reason is, you’ll be glad you have an extinguisher, and H3R Performance makes some of the best ones on the market. 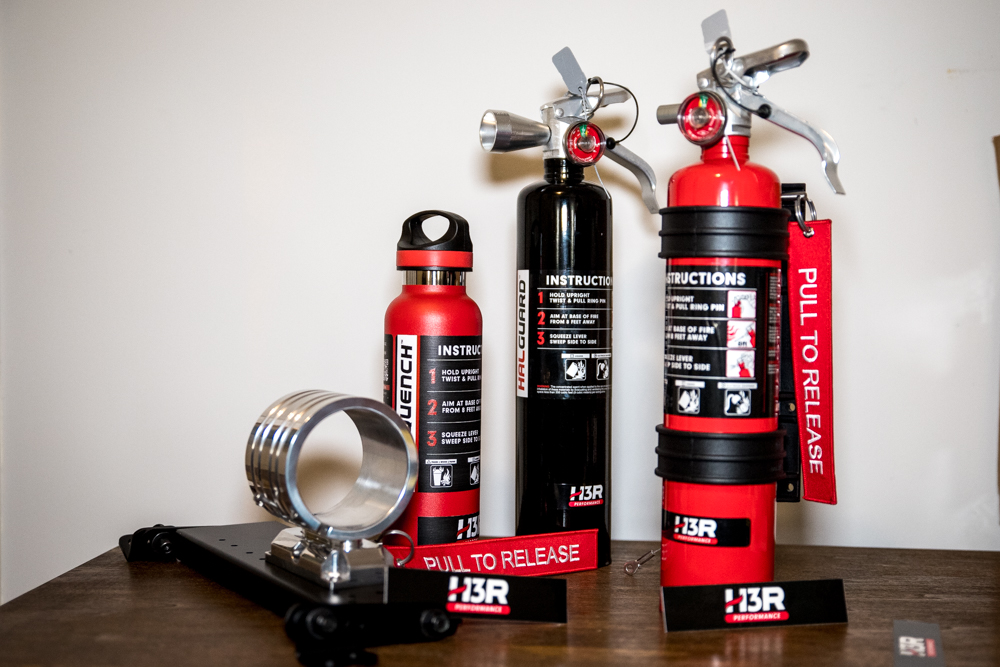 No matter what class of fire you encounter there will always be the same three things present:

Now, the idea is that taking out one or more of these things will extinguish the fire. For example, if you smother a campfire using an ABC powder extinguisher (like I did) – you blanket the fire with a fine powder that suffocates the fire. So, by removing its oxygen the fire goes out. Easy. 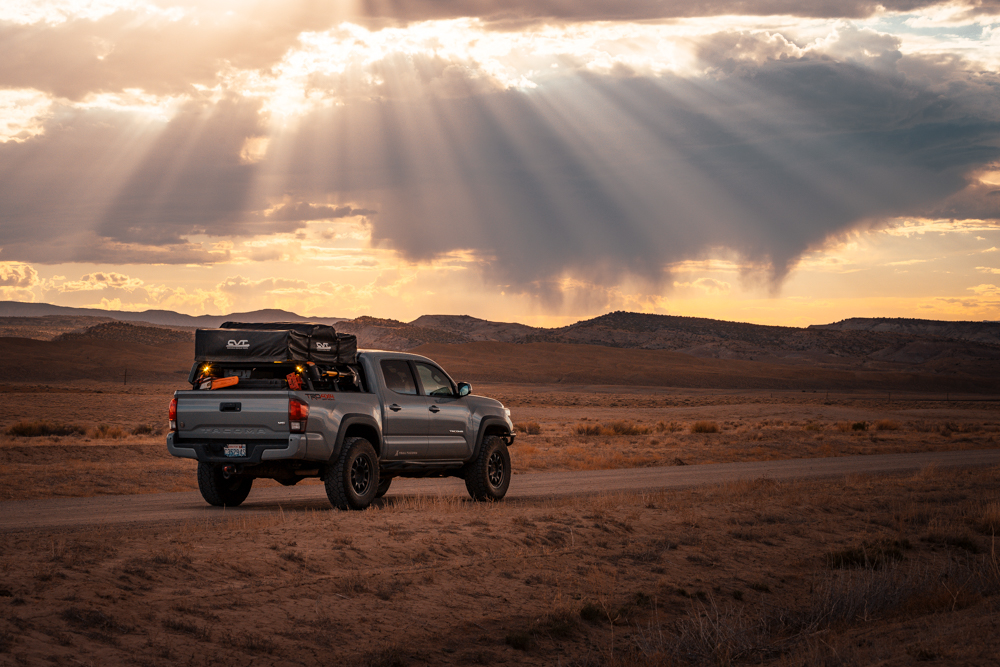 1. The ABC powder fire extinguisher (like the H3R Performance MaxOut)

Out of all these options, there are two that stand out as the most effective to the types of fires we may see while on a trail run or out camping. First is the ABC powder (MaxOut) fire extinguisher. And the second is the clean agent (HalGuard) extinguisher. Both of these extinguishers share virtually the same hardware and all-metal construction, so they’ll stand up to the rigors of the road. The difference is the extinguishing agent they contain. The MaxOut is great for fire types A, B, and C – which we’re likely to see. And trust me, this thing works.

Since we’ve all added a bunch of accessories that use electricity, we have more risk for an electrical fire. Even if everything is properly installed, and you have made sure your electrical system can handle everything. The clean agent or HalGuard extinguisher is perfect for that. It’ll put out your electrical fire, and because it’s a clean agent, it won’t leave your interior covered in a cloud of chemical dust!

This is why they recommend mounting the HalGuard extinguisher in a place that is easily accessible to the driver. And H3R Performance has a solution for that. The universal seat mount places the extinguisher at the front of the driver or passenger seat so it sits comfortably under your legs. It works with both the Quick Release Billet Flat Mount and the Extreme Duty Quick Release Mount. I decided to use the billet flat mount for my interior. Install was easy! 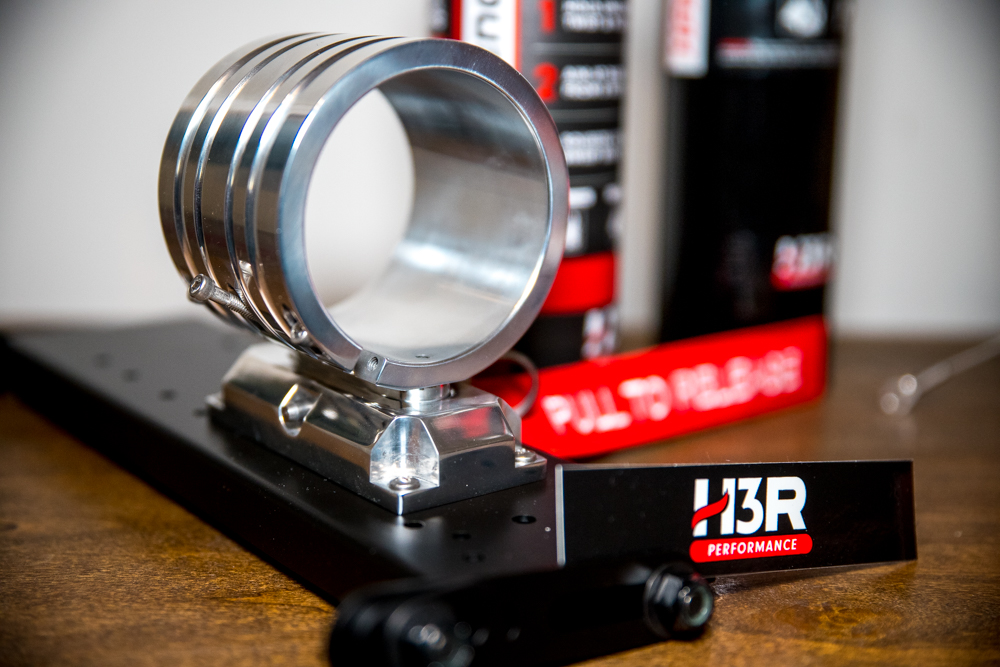 What You’ll Need (not included): 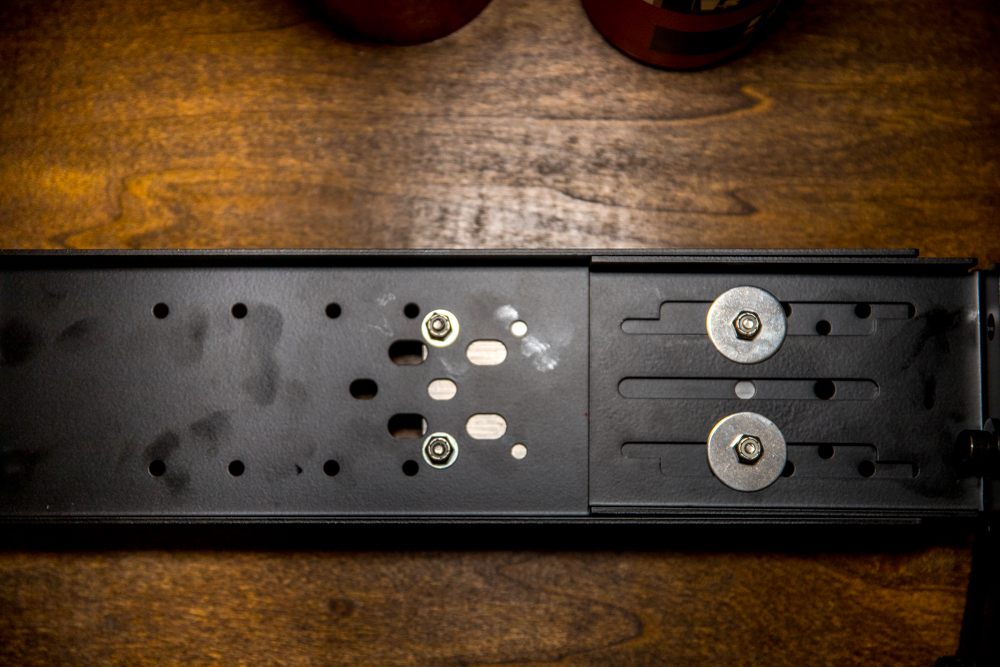 First things first, you’ll need to attach both ends of the universal seat flat mount plate loosely so that you can adjust the width later. Now you can attach the billet mount to the flat plate.

To do this, pull the quick release pin on the billet mount, put the band clamp part aside, and use the included screws, bolts, and washers to bolt the billet surface mount to the seat mounting plate. Do it so that one side uses the larger washers into the sliding part of the seat mount. See photo above. 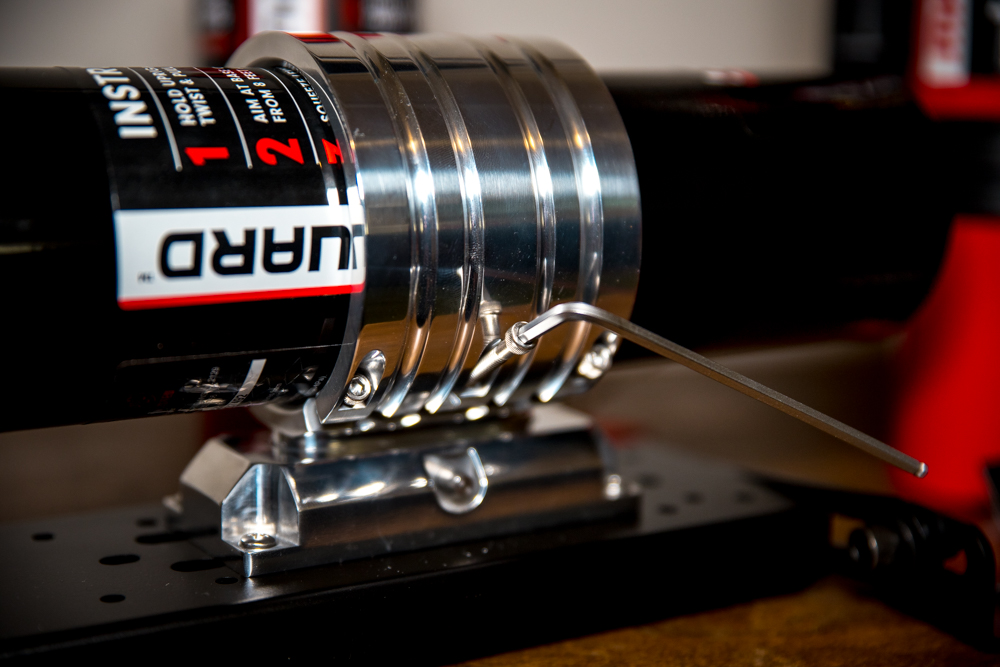 Once that’s done let’s get the HalGuard fire extinguisher on the billet band clamp.

You’ll see three screws, the center one is a jacking screw. Tighten the center screw to loosen the clamp so you can slide the extinguisher into it. 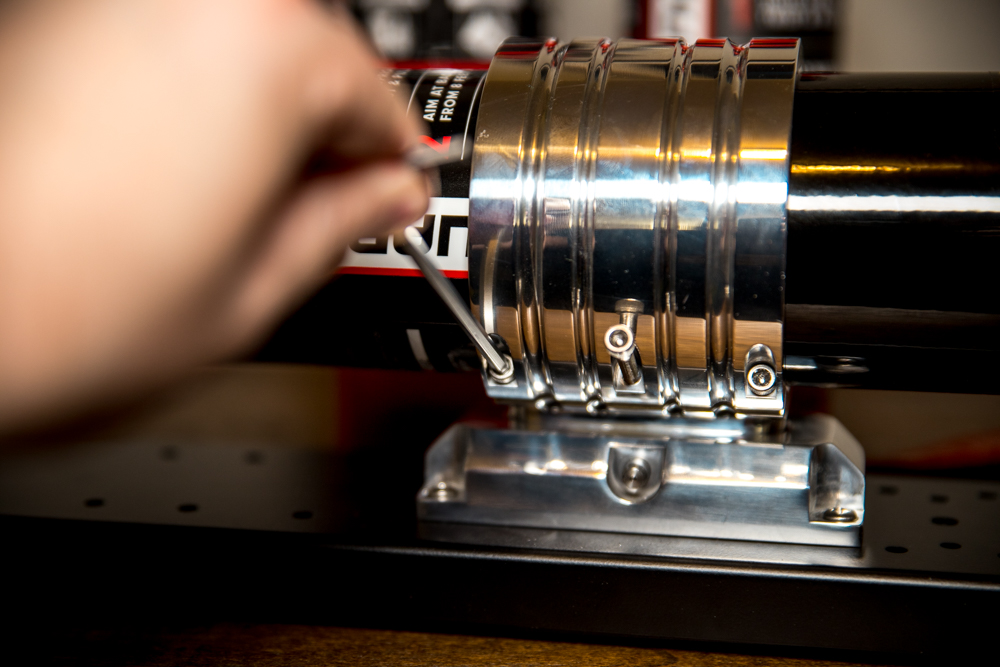 Once the billet clamp is on, loosen the tension screw to allow it to tighten around the fire extinguisher. If you’re satisfied with how it’s mounted, you can remove the jacking screw.

Then just tighten the two screws on the outside to keep it in place. Let move this aside for now. 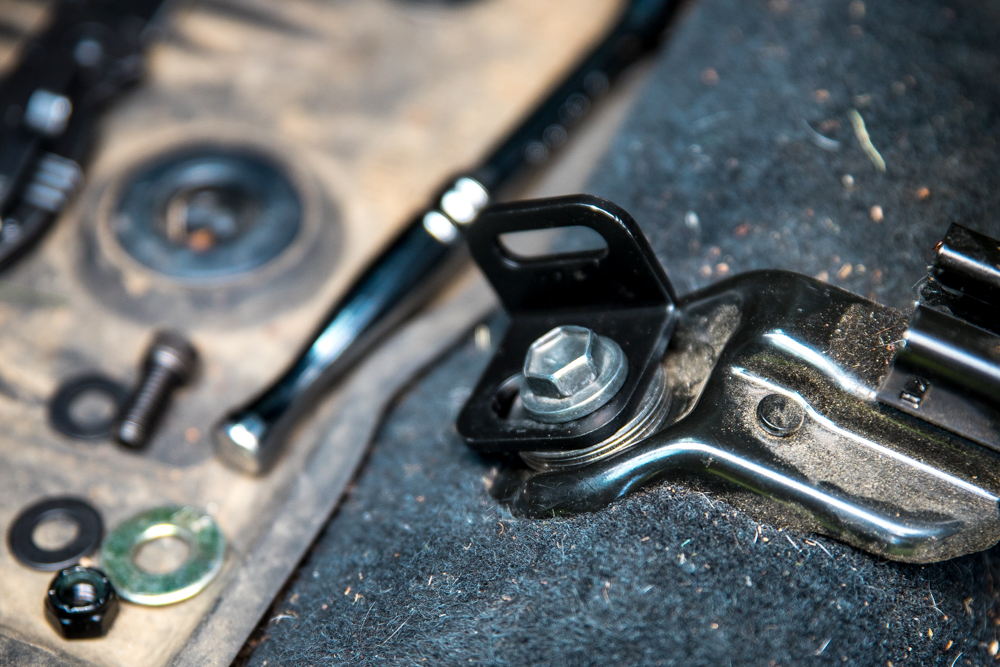 Time to get the universal seat mount installed. I put mine on the driver’s side. But this will work on the passenger’s side too.

Take your ratchet and remove the two blots on the front of your seat rails. Then insert the L- brackets and use four 3/8″ x 1 1/4″ washers as spacers too keep the mount flat. Do this on both sides. This part can be labeled as optional, but it helps to level everything out. 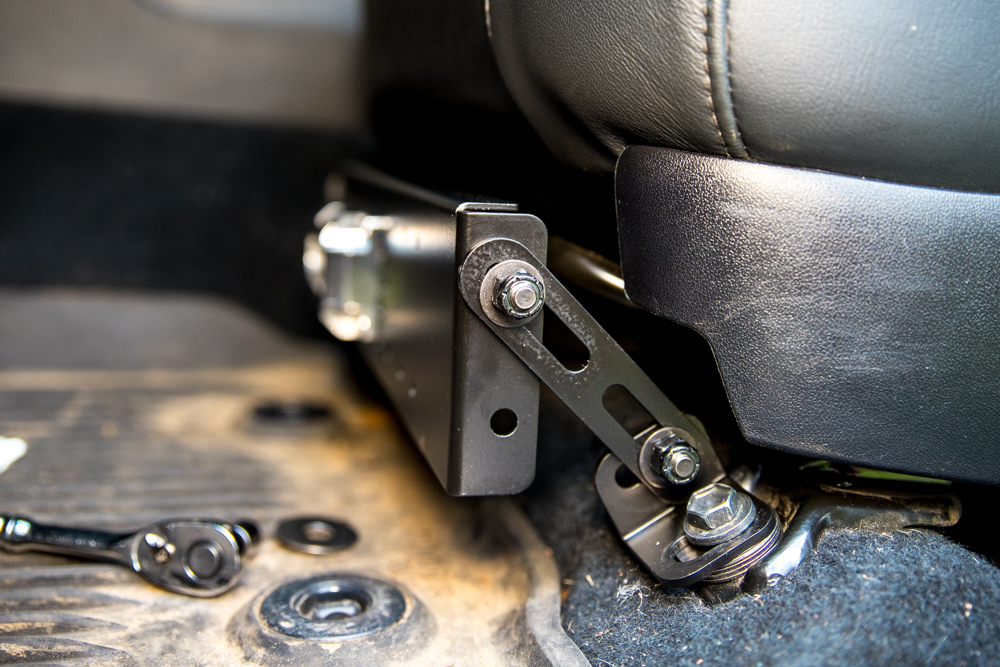 Then add the straight brackets using the supplied hardware. Just put the bolts through the holes. Add a washer, then bolt. 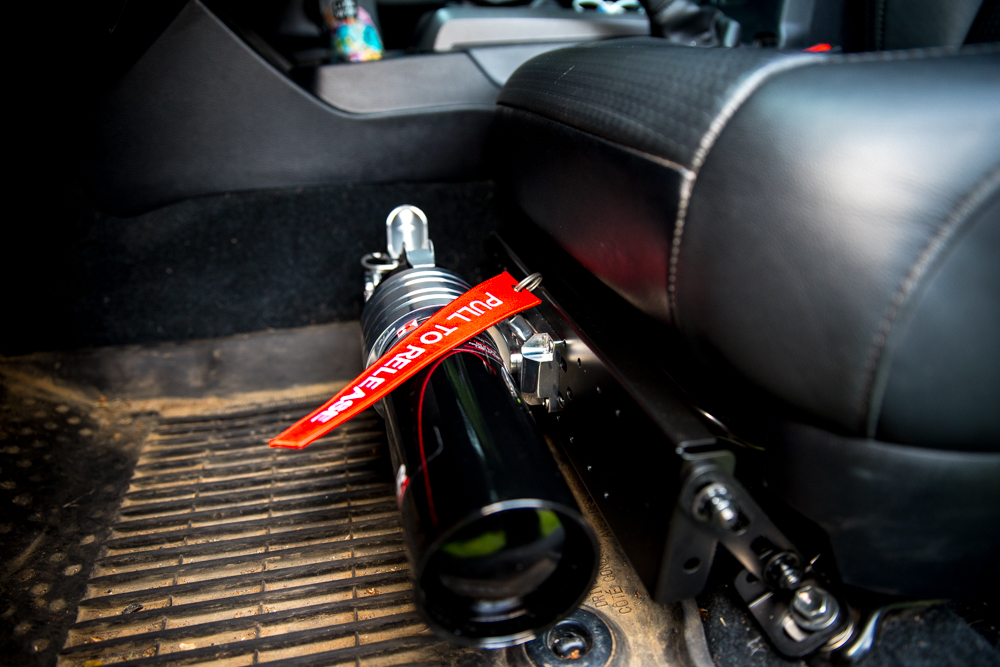 Just put it back in the billet mounting plate and replace the pin. This mounting solution is solid. And it makes a once useless space in your cab useful. 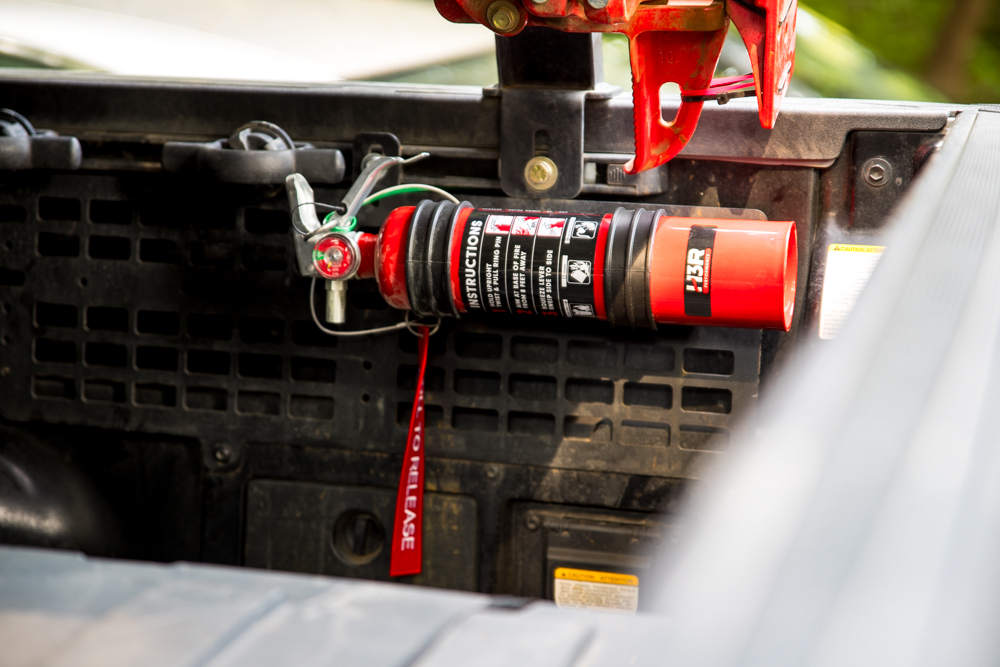 The HalGuard extinguisher takes care of your interior, so now it’s time to protect the rest of your Tacoma. I’d recommend getting an ABC powder extinguisher to keep on the outside. This is the most versatile fire extinguisher, and it’ll put out almost every type of fire.

The mounting location is up to you. H3R Performance makes a variety of mounting solutions for their extinguishers. They’ll have what you need. With tube mounts and flat surface mounts, the options are endless. I decided to use the Extreme Duty Flat Surface Mount to mount my MaxOut extinguisher to a molle panel in the bed of my Tacoma. It was easier than the seat mount!

Just use some big washers, so they don’t slip through the molle panel. Wherever you choose to mount your external extinguisher, it’s best to keep it in a place that’s visible and very accessible. You’re not gonna want anything in your way when you need it. And if you’re not around, it should be easy for anyone to find. 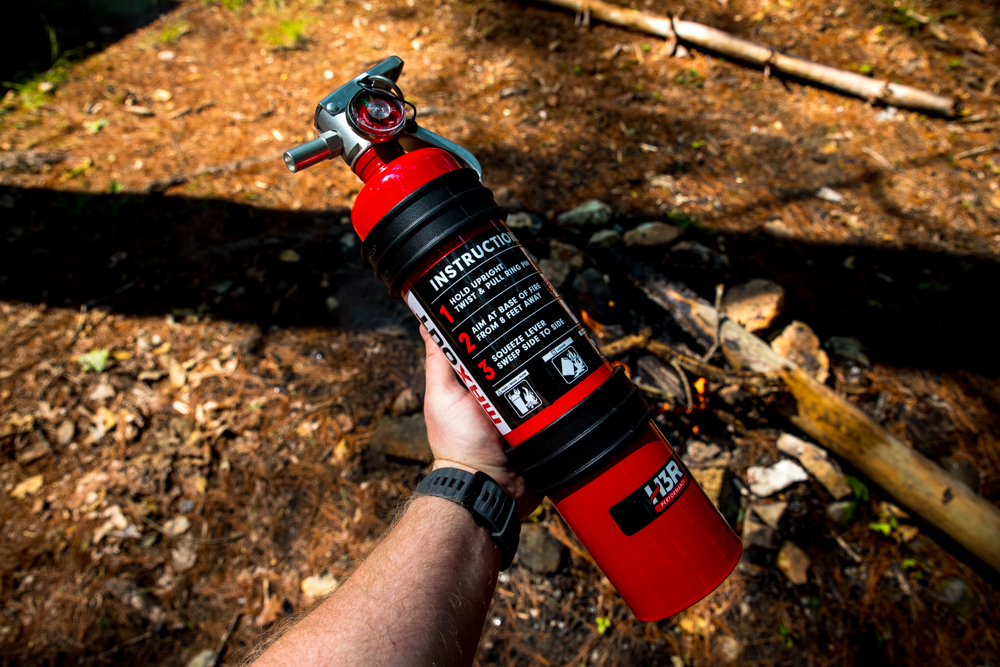 Now, I’ve never used a fire extinguisher before. And naturally, I couldn’t wait to put a fire out.

Like I said earlier, these are not for putting out campfires. But I did exactly that so I could show you what to expect when you squeeze the handle. 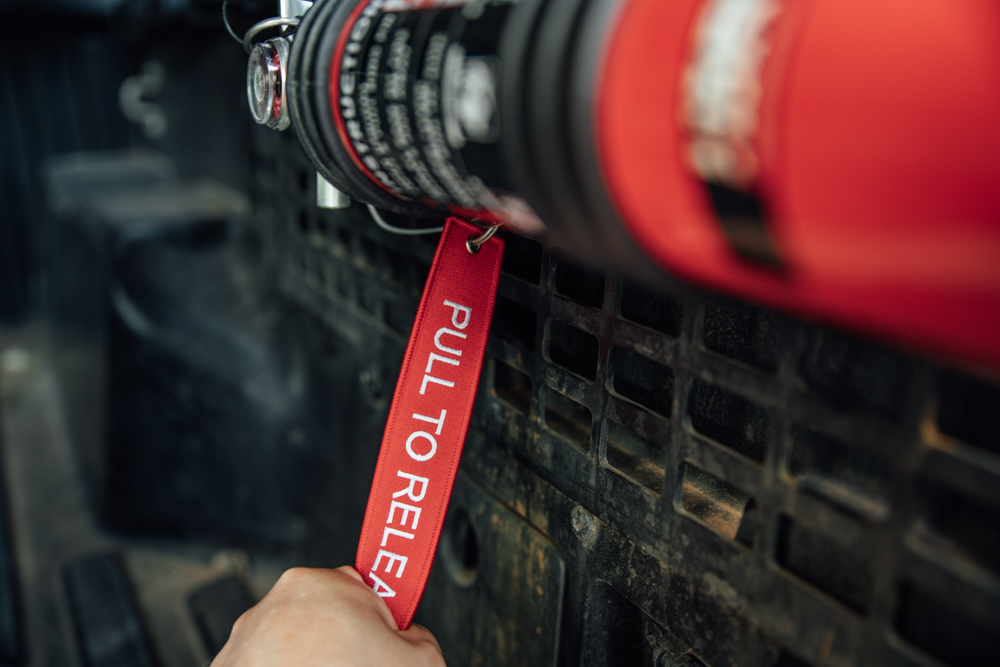 When the time comes to use your fire extinguisher, pull the red tag that says “PULL TO RELEASE” to release the extinguisher from its mount. Maintain a safe distance from the fire. About 8 feet is recommended.

Then twist and pull the ring pin. This will break the tamper seal and allow the handle to be depressed. Think of it as the safety on your rifle. The only difference is there’s no going back. Once the tamper seal is broken the pin won’t stay in place. Once you partially spray an extinguisher, it will not hold its charge. NFPA 10 requires that the extinguisher be recharged after any use. 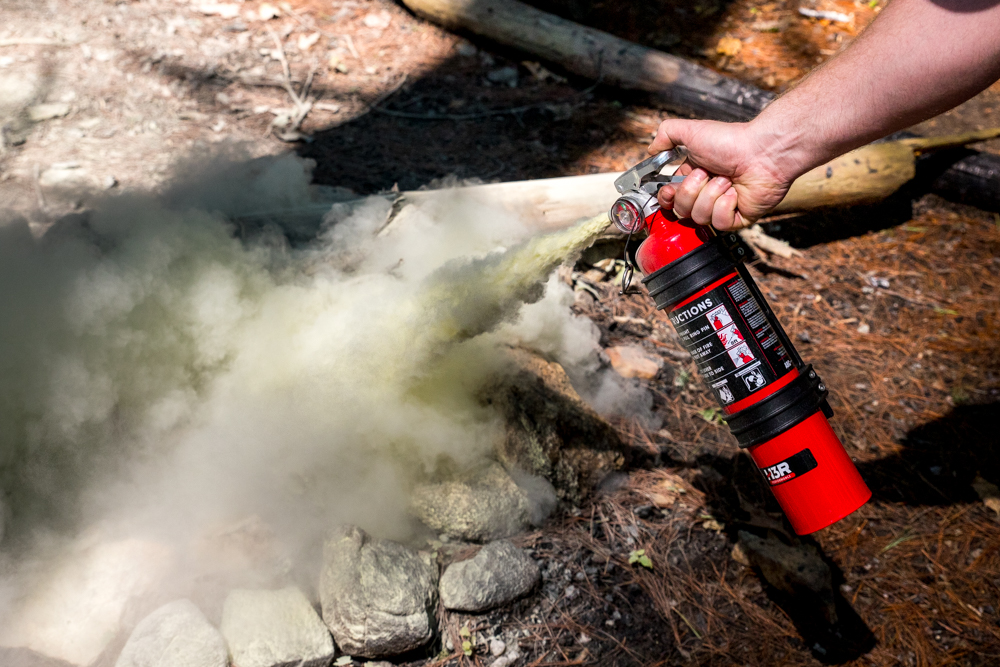 The last step is to aim at the base of the fire or at the fuel source and squeeze the handle to release whatever fire extinguisher agent you’re using.

Sweep side to side to maintain as much coverage as possible. 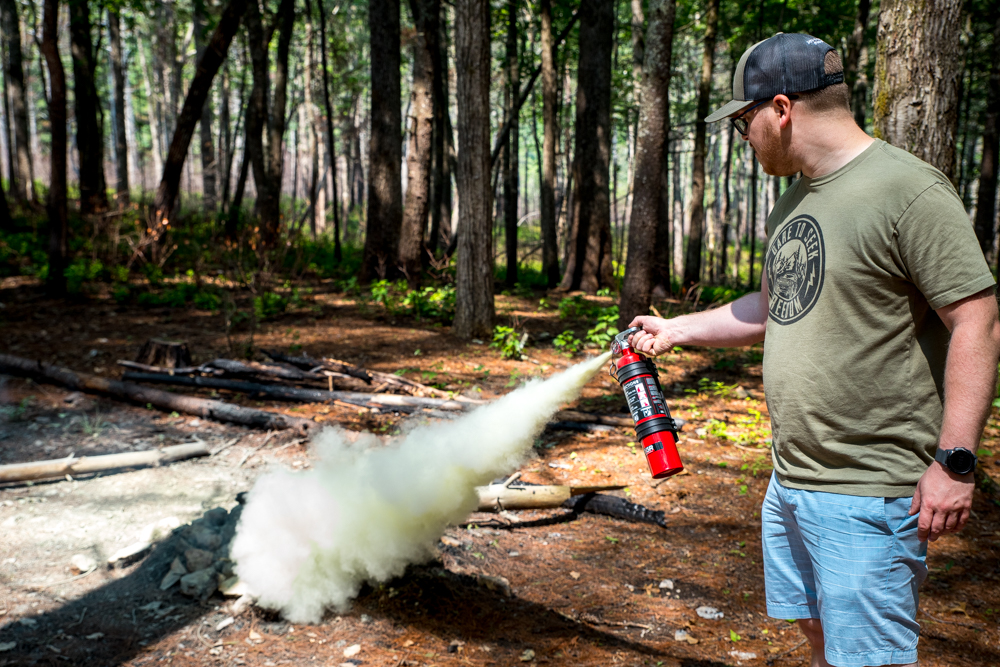 As mentioned before, any discharge of your extinguisher means that it needs to be recharged. Thankfully, H3R Performance extinguishers are all refillable!

It may take a few calls because most fire extinguisher service companies only do exchanges or refill bulk fire extinguishers. But a call to H3R Performance will set you in the right direction. I got mine refilled for $30.00. Small price for that added peace of mind. 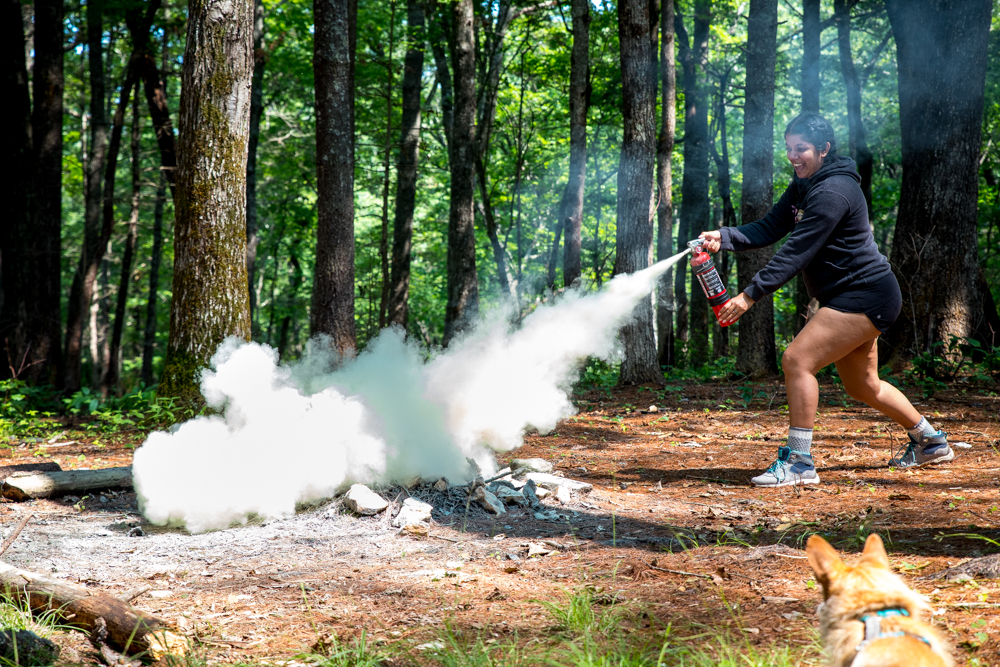 After all is said and done, I can’t believe I went so long without a fire extinguisher. It’s like not having a first aid kit.

Being prepared for whatever comes my way is worth so much more than you may think. Like I said earlier, it’s one of the last things you’ll ever want to use. But you’ll be glad you have it if the time comes. The whole line of fire extinguishers from H3R Performance is impressive. They’ll have something for your needs, and their service is top-notch as well.

Hey guys, I'm Chris! Just a guy building a rig that can handle all my adventures.

Twice I have averted an engine fire when wiring shorted out. I did it with an adjustable spanner that I used to remove the positive lead from the battery.