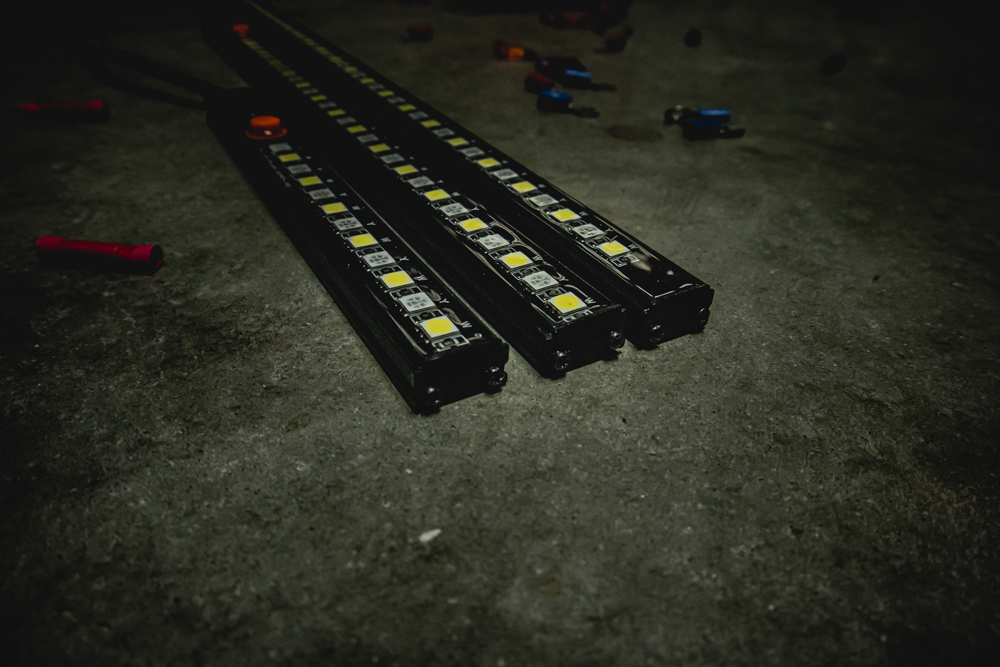 If you are looking to light up your rig, don’t mess around with those cheap eBay lights that will burn out and die on you when you need them the most. I have owned a number of these cheap LED strips and they always end up breaking within a few months.

When it comes to LED light stips, it is typically best to go with the saying “buy once, cry once” – meaning spend a bit more upfront for a quality product that you will not have to replace. If you are spending $20-30 a few times a year to replace your LED light strips, why not spend more upfront and get some LED strips that are going to last you through the years? 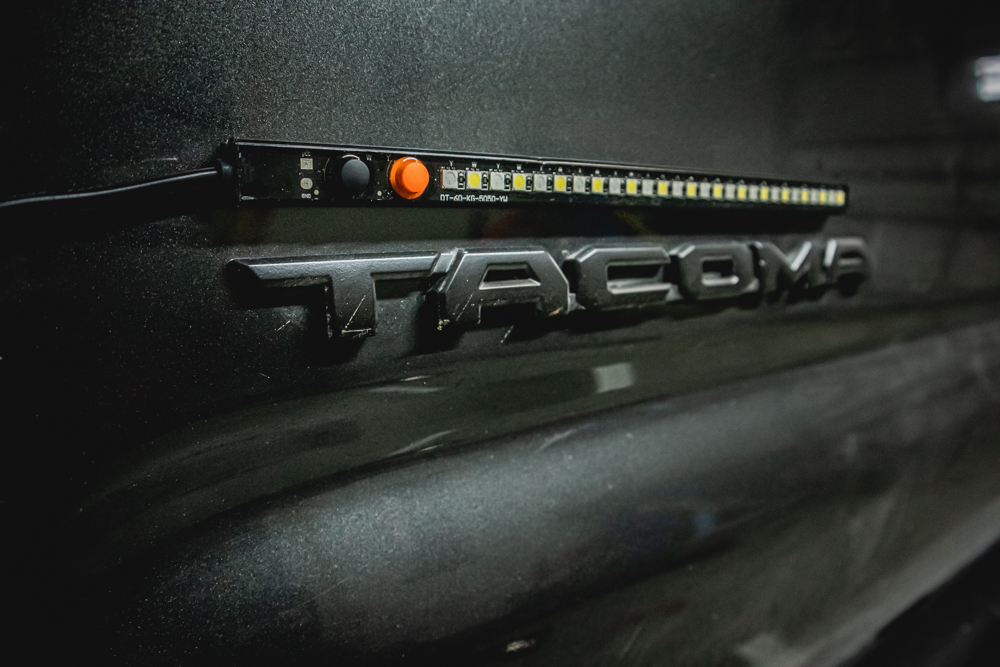 While looking for quality LED strips, I found the Sloop Imports LED Light Strips. The first thing that stood out to me about these lights was that they’re made out of metal and they are magnetic. The hood of the 3rd Gen Tacoma doesn’t have many points where an LED strip could be zip-tied down, and the stick-on LEDs are unreliable and will peel off the first time you drive in the rain.

The lights are made out of black anodized aluminum and are IP66 rated, which means they will remain waterproof under a strong jet of water (i.e. pressure washer) but should not be submerged in water. An IP66 rating should be sufficient for most use cases, except if you have a snorkel and plan to use your truck as a boat.

The beefier build quality is something I can appreciate, having dealt with my fair share of cheap LEDs. 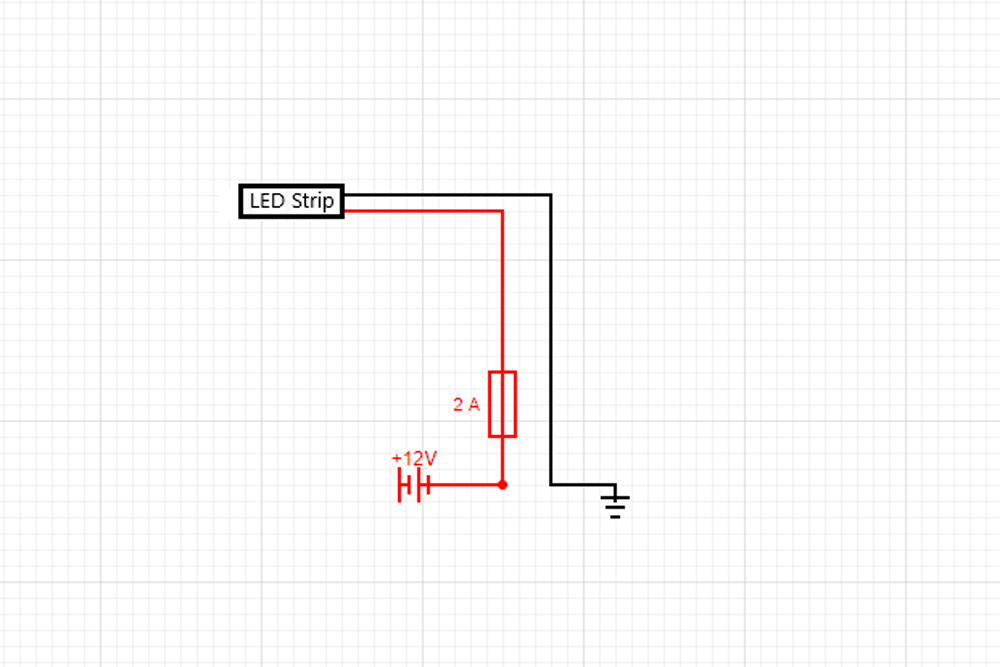 The photos on the Sloop Imports website show that the LED strips have a connector on them, but they just came with bare wire ends with a positive and negative lead. I did not find this to be a problem because it is easier, in my opinion, to splice the wires than to order the proper connector. One thing I really like about these LED strips is that the wires were soldered over, so they were super easy to put into the wire connectors.

Wiring these was pretty simple. They do not draw too much power, so I simply ran the positive (red) wire to an inline fuse which connected directly to the positive battery terminal. I then ran the negative (black) wire to the ground bolt on the body. 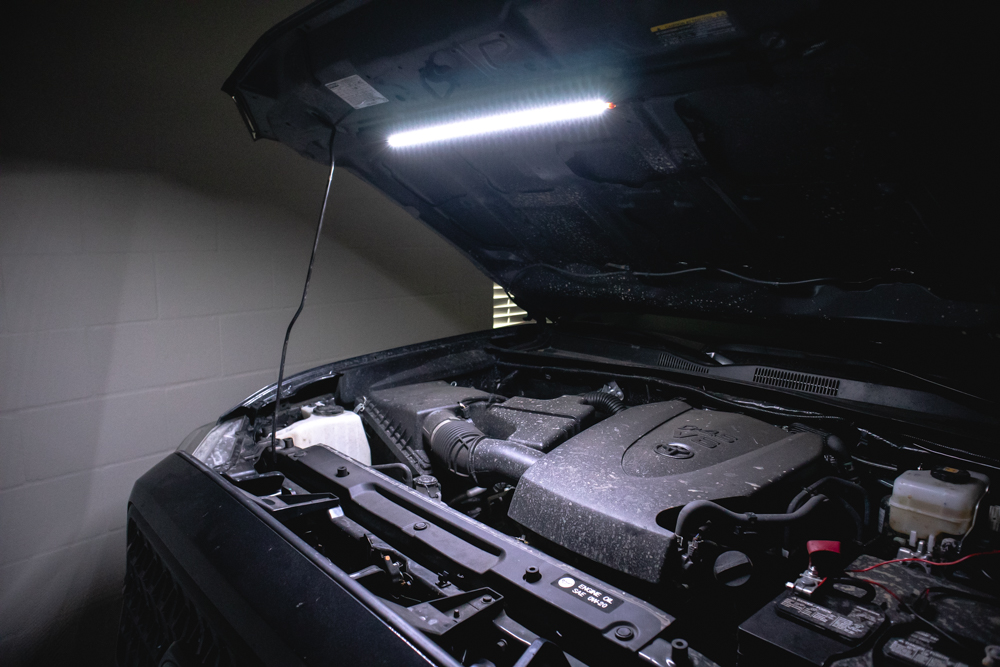 The Sloop LED strip magnets are pretty solid, provided they are placed on a flat surface. Under the hood of the Tacoma, there are only a couple of mounting options for the 12” strip, which is what I used.

You can either mount it in the space behind the radiator (pictured below) or along either side of the hood. Just make sure that wherever you want to mount it can clear the LED strip and isn’t directly over or touching any hot engine components. 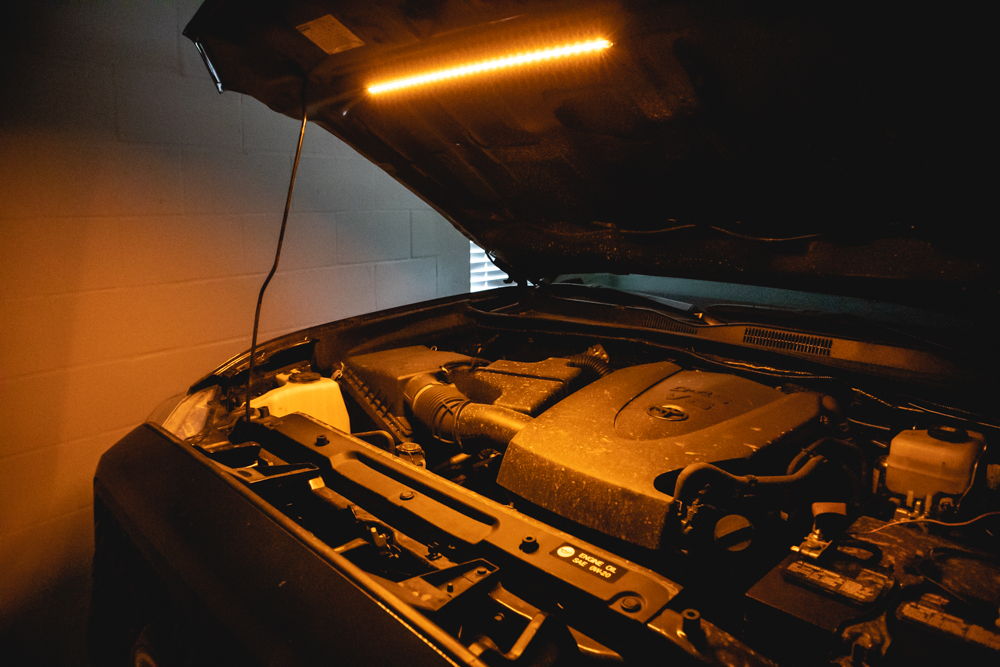 The 23.5” light I got is the white/amber color configuration. The white LEDs put out a LOT of light, completely illuminating the engine bay. The amber LEDs are an orange color, and also illuminate the engine bay pretty well, albeit less than the white LEDs. 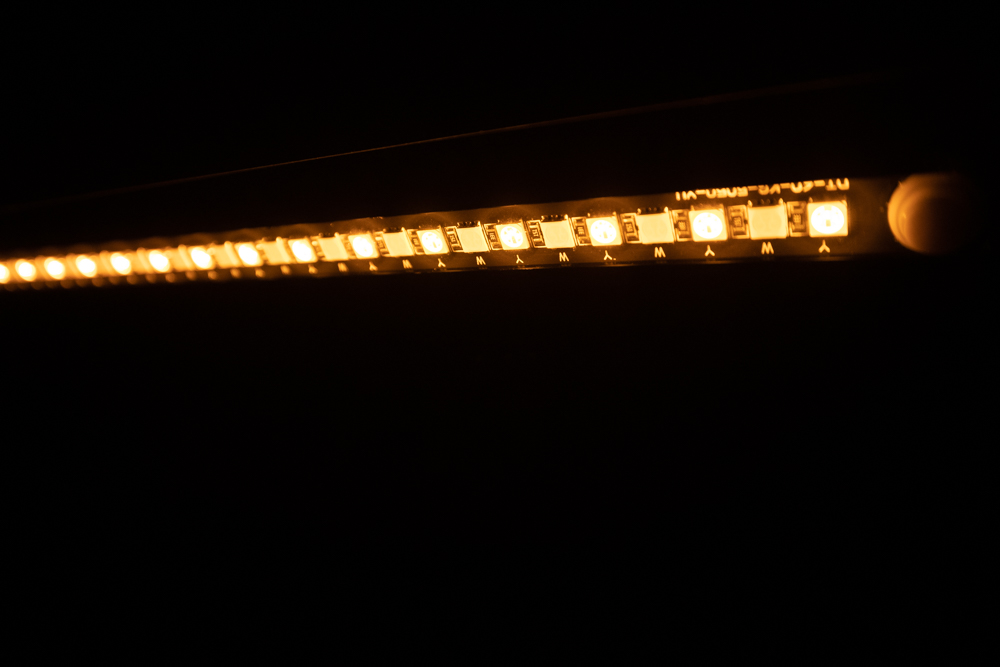 With these LED strips, it’s also possible to light both color LEDs at once. I don’t really see a use case for lighting both colors at once as it doesn’t really seem any brighter. The light just seems to be tinted a color somewhere between white and amber. 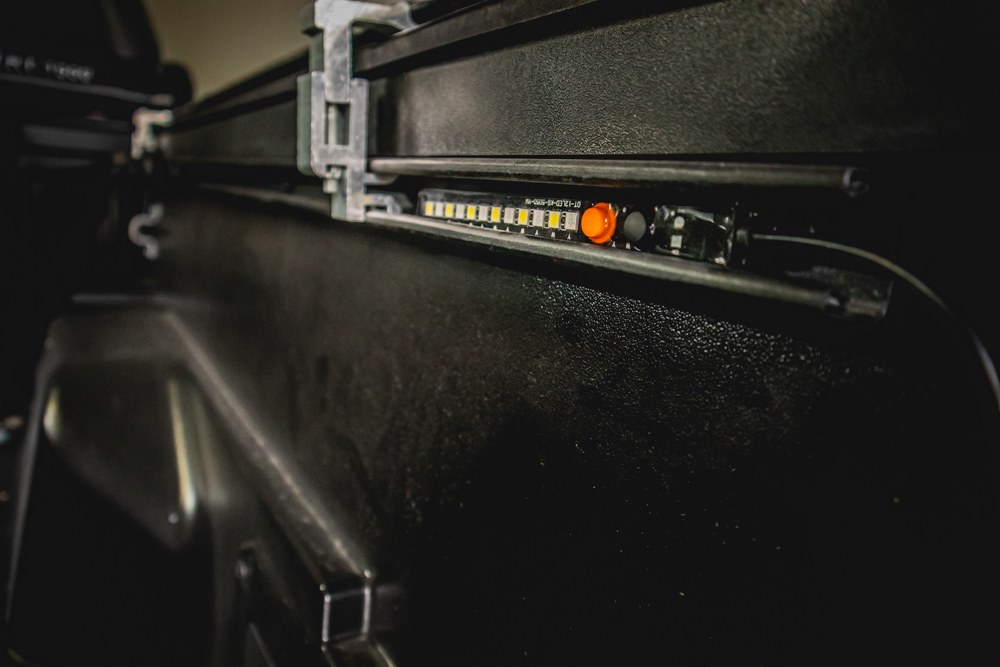 However, I ran out of wire so I didn’t connect the 4” LED strip yet. Both of these LED strips are the white/red color configuration.

I decided to go with the white/red color option for the bed for one very important reason: bugs. Red light doesn’t attract bugs nearly as much as white and amber. I don’t anticipate using the LEDs under the hood often, if at all, while out in the woods so that’s why I didn’t get the red for that location as well. 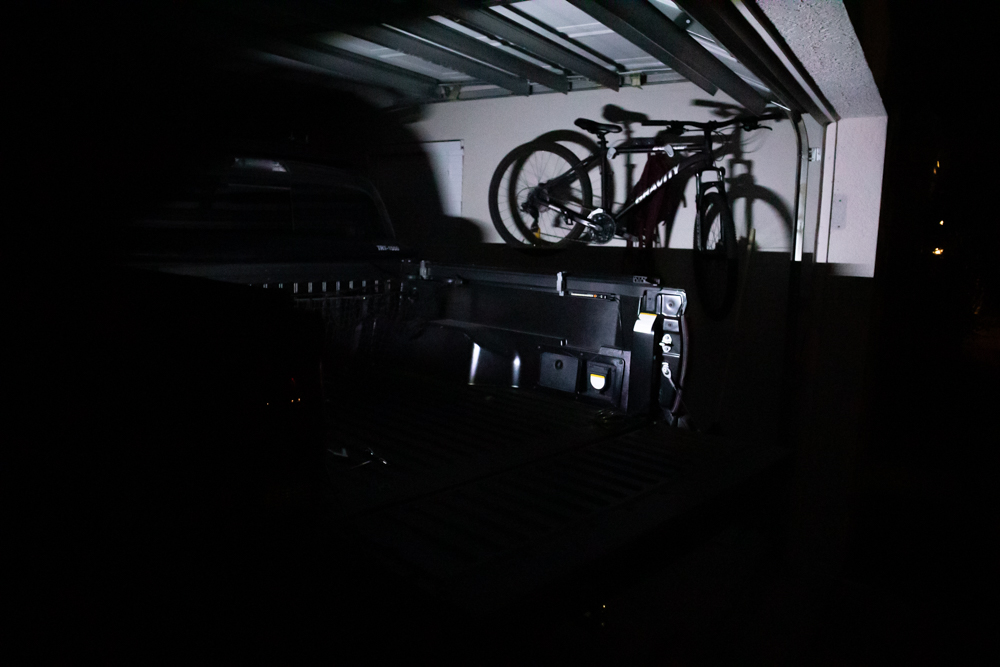 I will eventually wire up both the 4” and 12” light strips in the bed, but the 12” strip provided me with more than enough light.

These LED strips happen to fit perfectly in the Tacoma’s bed rails, so that’s the location I went with for mounting. I was hoping to put it on the rear bed rail, but it wasn’t magnetic.

If you look under the truck at the frame on the driver’s side, you’ll see a wire bundle running along the length of the truck. This is where I ran the wire from the engine bay to the bed, securing the wiring with zip ties.

Similar to the white/amber option, both colors put out a lot of light and illuminated the bed completely.

When I was testing them, I was pleasantly surprised when I saw the lights completely lit up the wall of my garage. When both the red and the white LEDs are on simultaneously, the light is pink. Again, I didn’t think it was any brighter than just using a single color at a time.

Along with the LED strips, I also got a pair of original color Wrapties.

These straps a new spin on traditional tie-down options like racket straps and bungee cords.

The Wraptie is a combination of high grade, elastic webbing and hook and loop (velcro) fasteners which create a quick and efficient way to strap down your gear and accessories.

The design allows for fastening your gear rapidly and avoiding any damage to your vehicle. You simply secure one end of the hook and loop fastener to a sturdy point, apply the appropriate amount of tension and secure the remaining Wraptie to itself, utilizing the velcro. And boom! You’ve got yourself solid, easily reusable strap that won’t damage anything, unlike a bungee cord or ratchet strap. 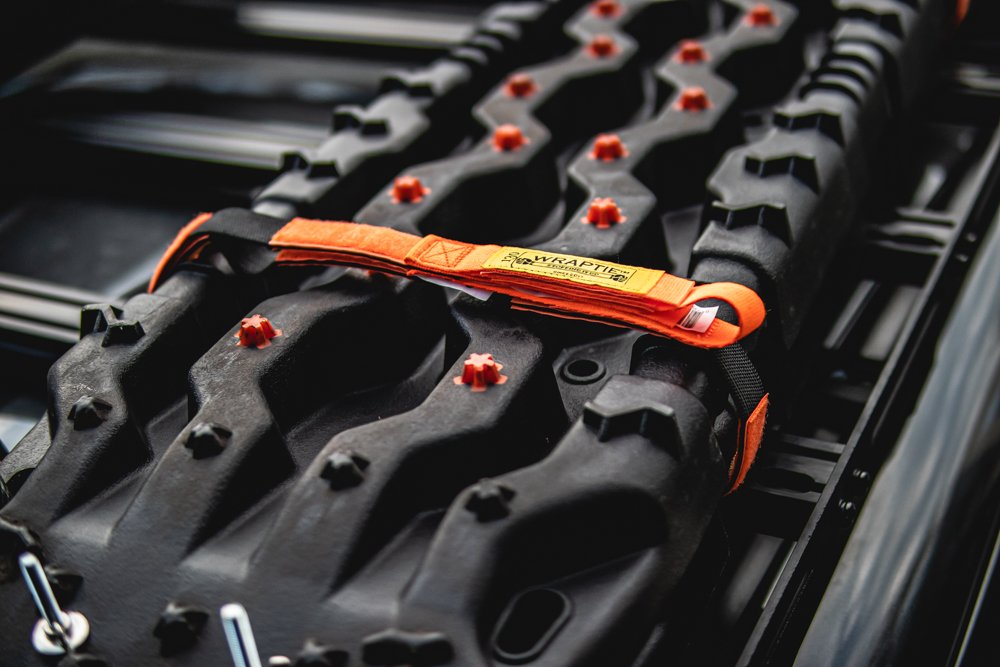 The potential uses here are almost endless. So far, I’ve used them to secure items I was hauling in the bed, strapping my bike down so that it didn’t fly around and to keep my Fiery Red traction boards together.

Check out my recent review of these budget recovery boards if you want to know more about them.

In short, you’re going to want to carry a set of these around. At first, I wasn’t convinced, but this is one of those products you don’t know you need until you have one laying around and find out how versatile of a solution they are. 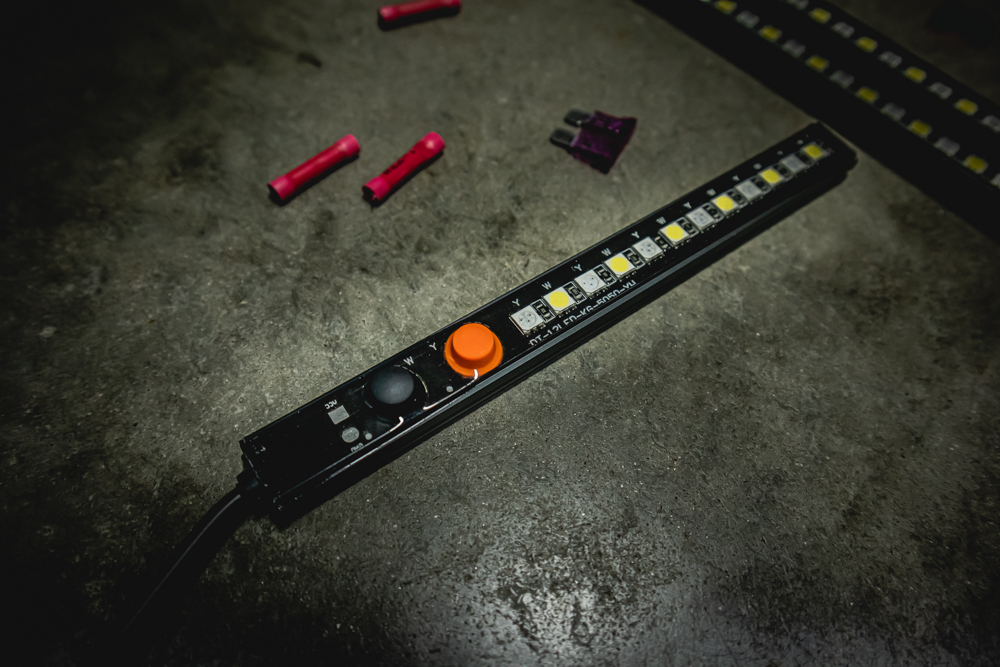 These Sloop Imports LED strips are a super solid product for a relatively good price.

The LEDs are housed in a strong, magnetic, black anodized aluminum IP66 rated casing which should definitely hold up to any abuse they might encounter while out on the trail.

I really like how the LEDs have buttons on them which saved me the extra effort of wiring up a switch during install. If you want to have the LEDs under the hood turn on automatically when you lift the hood, you can push the button to have the lights always on and then wire the light to a ground contact switch. With some ingenuity, closing the hood would disconnect the light from the ground, and then opening the hood would ground the switch.

Overall, these LEDs are a great option for anyone looking to add some auxiliary lighting to their vehicle.