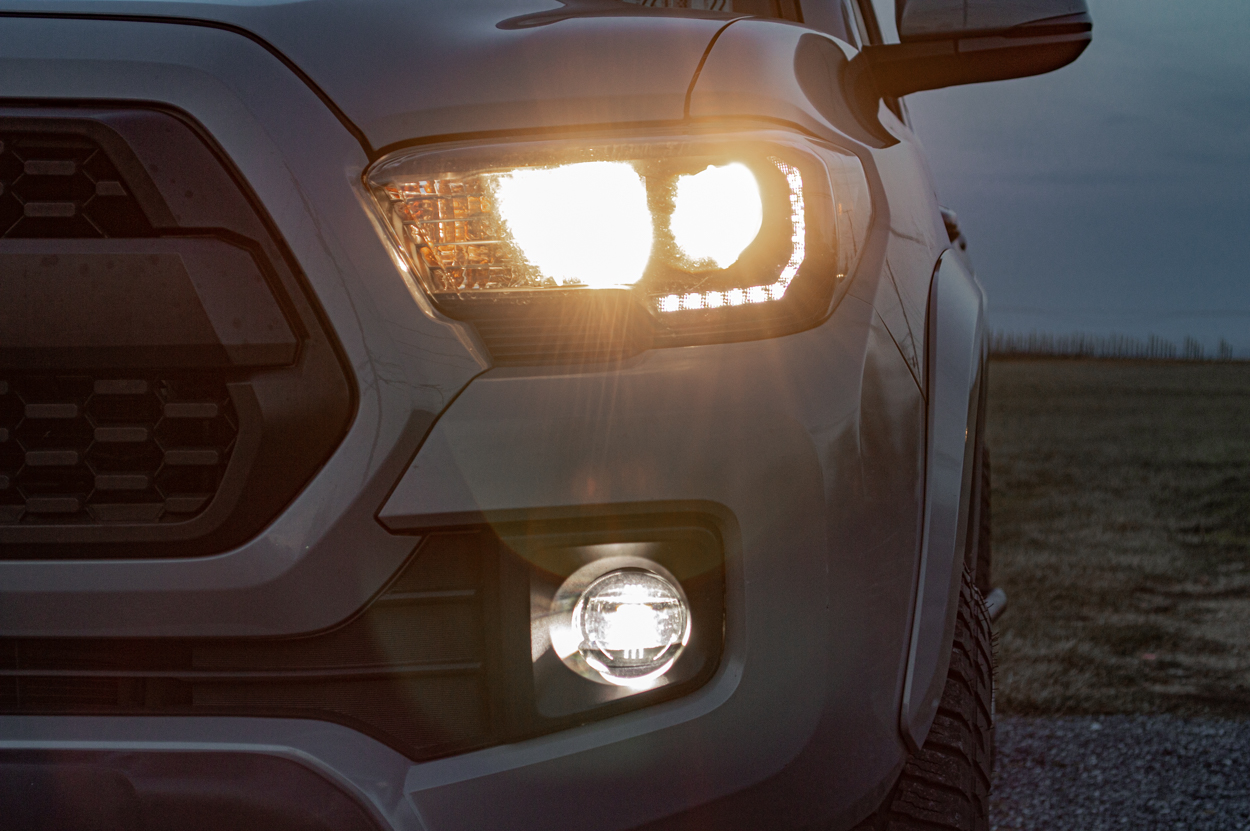 Whether you are an off-road enthusiast or a daily commuter, it is crucial to have adequate lighting when driving in the dark. Nighttime driving conditions can be very dangerous when there is poor visibility.

I’m sure most of us have had experiences where that poor visibility almost caused, or did cause, some kind of accident. Maybe you were driving down the highway and a deer ran out in front of your truck, causing thousands of dollars in damage. Maybe you were doing a trail run at night and you didn’t see that rock or log until it was too late.

Before you go out and spend the big bucks on lightbars or ditch lights, I’d recommend checking out the Brite Box Anytime from Aspire Auto Accessories. For around $100, the Brite Box gives you the ability to utilize both your high beams and your fog lights at the same time, using all of the lighting you have at your disposal. For whatever reason, the factory wiring harness does not allow for the operation of the high beams in conjunction with the fog lights.

This means you lose out on a lot of your near visibility when using your high beams. Personally, I don’t understand the logic but thankfully there’s a simple solution. This relatively straightforward modification will give you a brighter and ultimately safer driving experience after the sun goes down.

The Brite Box is a device that can increase your safety on dark roads. As I mentioned, most vehicles limit the functionality of your forward-facing lights. Ultimately, this can leave you with blind spots while using your high beams.

While the high beams are certainly beneficial, losing the ability to see near the front and sides of your vehicle could leave you susceptible to not seeing an object or animal until it’s too late. With certain makes and models, it’s even worse, using the high beams turns off the low beams as well as the fog lights.

The various models of Brite Box give you varying degrees of control over your high beams, low beams and fog lights. This setup is available for all 2nd & 3rd Gen Tacomas and can be installed in about 30 minutes or less.

Although there are four options, not every make, model or trim have all four options available for purchase. It all depends on exactly which vehicle you own and what you’re looking to achieve.

As mentioned in the title, I’ll be covering the Anytime model which gives the user absolute full control. 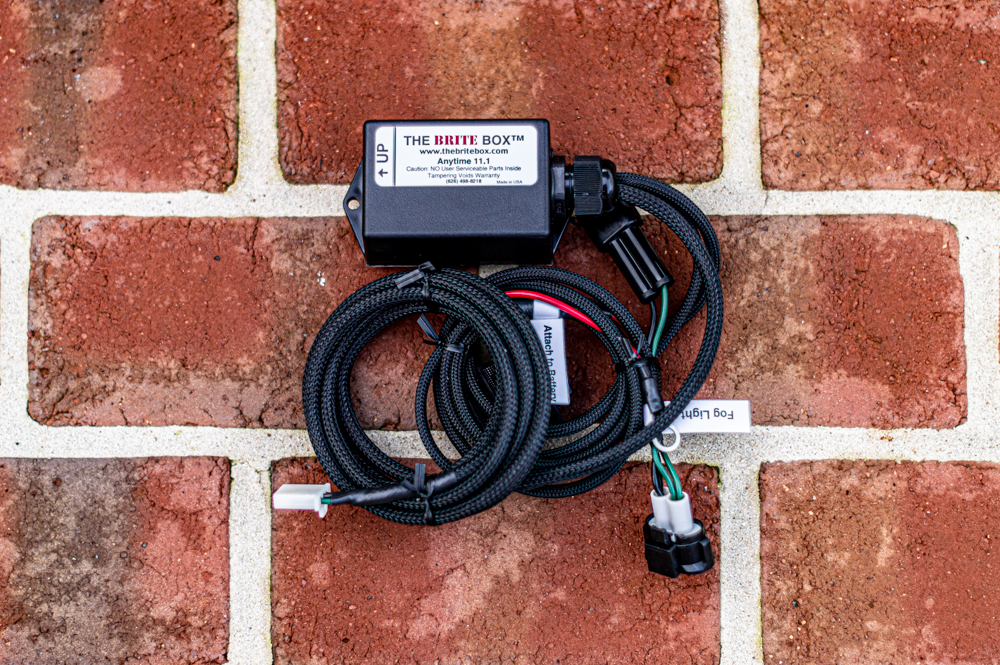 The installation of the Brite Box Anytime is very straightforward, so if this is the first modification you make, it’s simple to do and won’t take too much time. 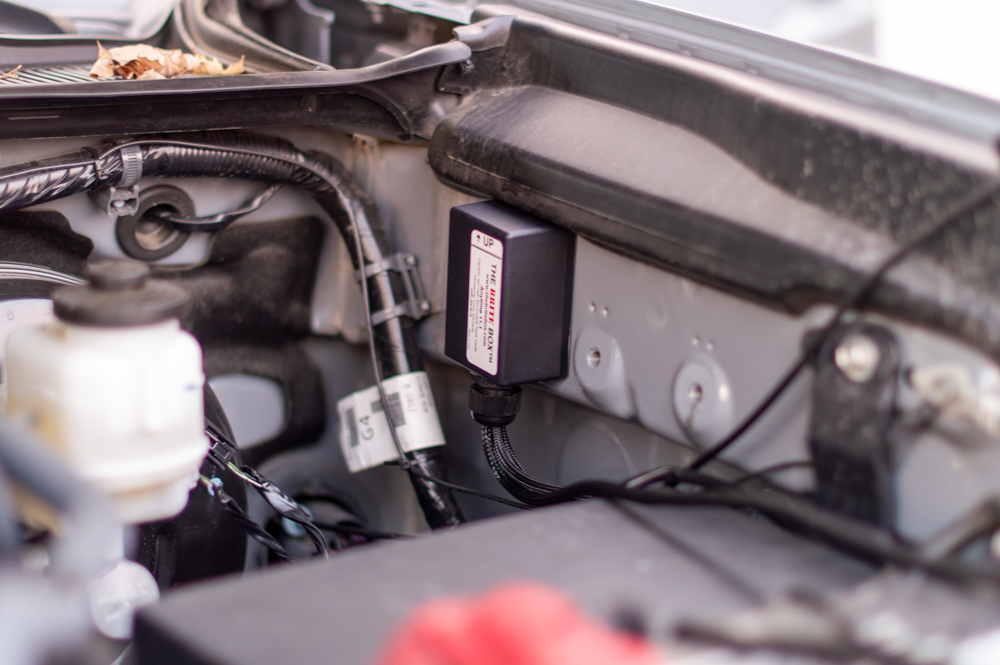 The Brite Box kit comes ready to plug and play. Start by cleaning the driver’s side of the engine bay frame with the provided wipe to ensure a clean surface for the adhesive to stick.

You do have the option of screwing the box into the frame, but with such strong adhesive backing, I trusted that it would hold just fine. I placed mine between the fuse box and the back of the engine bay. It is important to make sure that wherever you place the box, that all the wires still reach where they need to connect.

I recommend testing out the spacing before you permanently adhere the Brite Box into the engine bay. 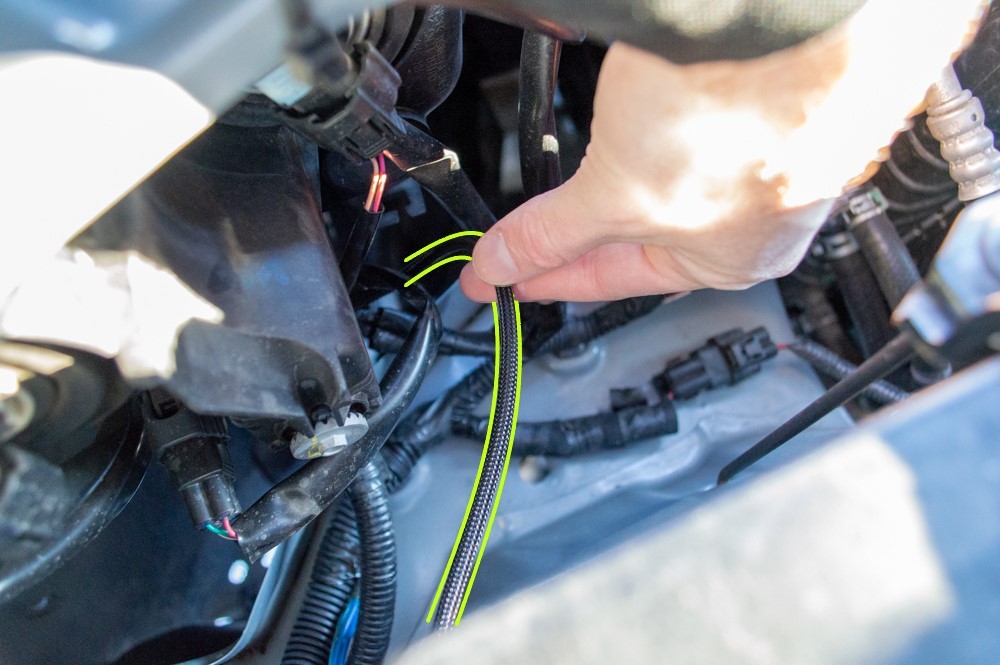 When you receive your kit, you’ll notice that everything is labeled clearly so you’ll know exactly where everything goes. 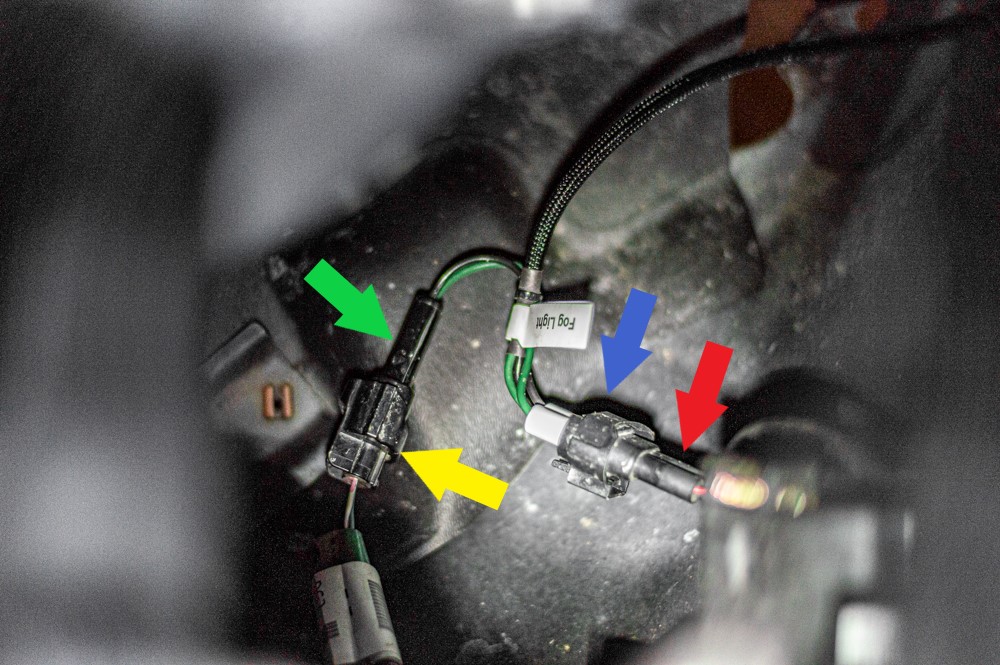 It is possible to connect the fog light harness without removing the grill and radiator deflectors from the front of the vehicle. Use a flashlight to locate the existing wiring for the fog lights. Reach down into the cavity behind the fog lights and disconnect the driver’s side fog light from the wiring harness.

You will only need to do this on the driver’s side. 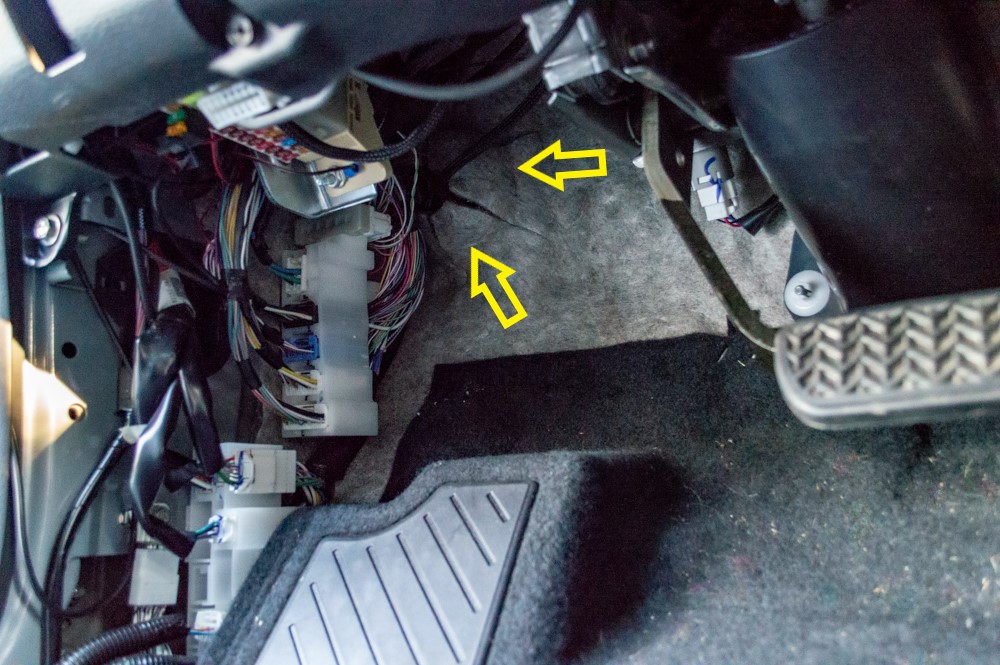 Inside your truck, on the driver’s side, remove the floor trim plate on the door frame by pulling up to detach all of the clips. Next, remove the plastic trim on the left side of the footwell. It covers the wiring and interior fuse box.

You’ll need to unscrew one Phillips head screw located above the footrest pad and then pull it towards the center console to pop out the clips. You’ll be able to see the bunch of wires coming through the firewall. Press back the insulation around it as best you can as it’s pretty stiff. 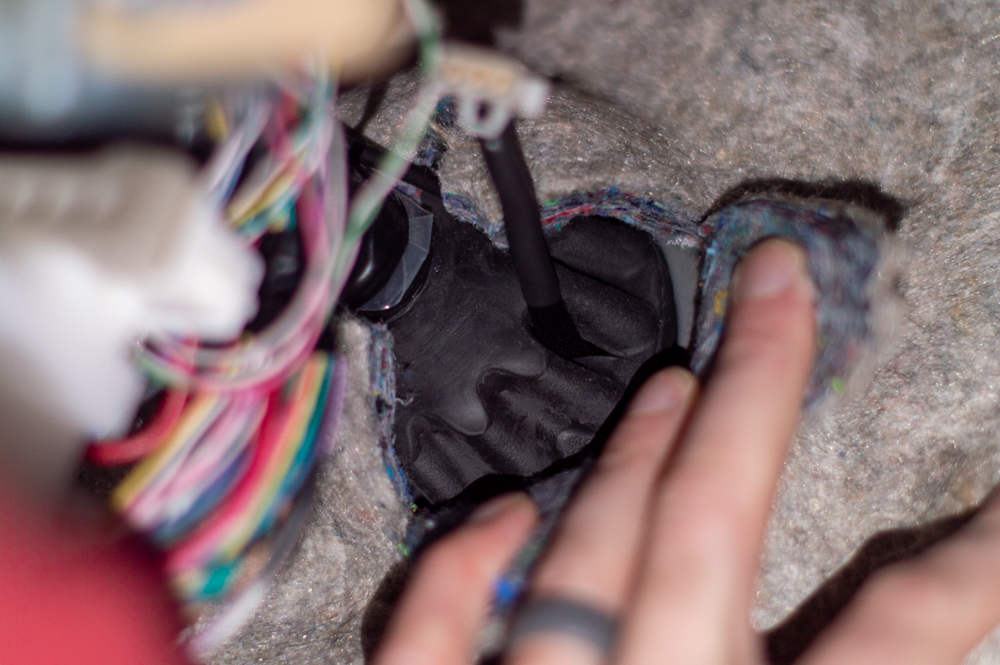 Once you have everything exposed, cut an approximately .5″ slit into the grommet. Cutting a slit instead of making a hole will allow your wire to come through but still keep a good seal.  Back in the engine bay, run the wire down to the other wiring seen in the firewall and get the end of the wire as close to the slit in the grommet as possible.

Then from inside the cab, stick the needle nose pliers through the slit and grab a hold of the wire. Once you have the wire with the pliers, slowly pull it into the cab. I got it far enough into the grommet so that I could reach through and grab farther back on the wiring to avoid pulling the adapter off of the end.

This was definitely the most difficult part for me, especially doing it alone. Make sure not to pull too hard as you’ll risk pulling the adapter off of the wires!  Alternatively, taping the harness to something sharp, like a coat hanger, and pushing it through the grommet would work as well. 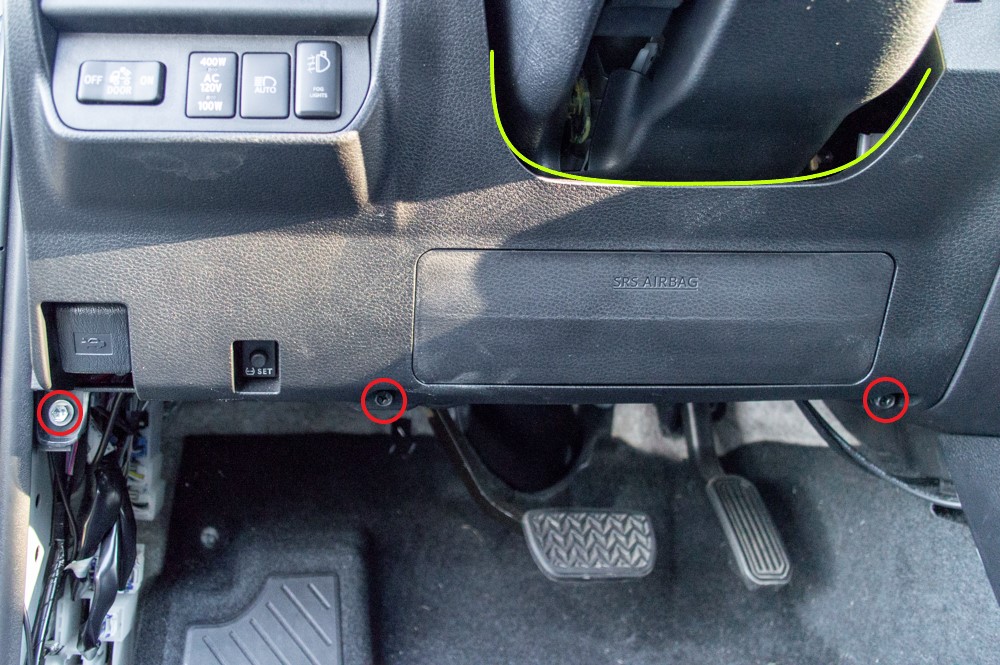 Note: The instructions below are for installing the switch on the left side of the dash. If you need to install it in the middle of the dash, then you will need to remove the dash trim around the head unit as well.

Next, you will need to remove the lower portion of the dash under and around the steering wheel column. There are two Phillips head screws and one 10mm bolt along with several clips holding it in place. Once the screws and bolt are removed, grab the dash cover near the steering column (green line) and pull it straight away from the dash.

Hopefully, that will detach several clips and you’ll see where the remaining clips are located so you can remove them completely. If not, keep pulling until you get a couple of the clips to release. There are some switches still connected to the wiring behind it, so the dash trim will hang by those wires. 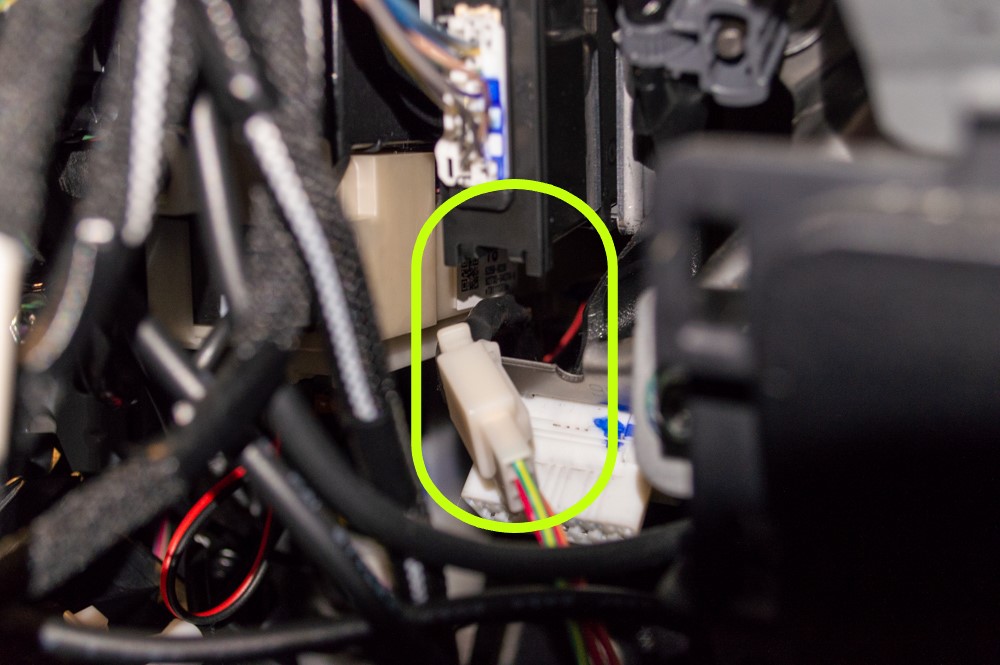 Take the wire that you fed through the grommet and feed it through any of the openings in the framework behind the dash cover.

You’ll want to do this so that the wiring and plug for the switch do not affect the dash cover clipping back into place. 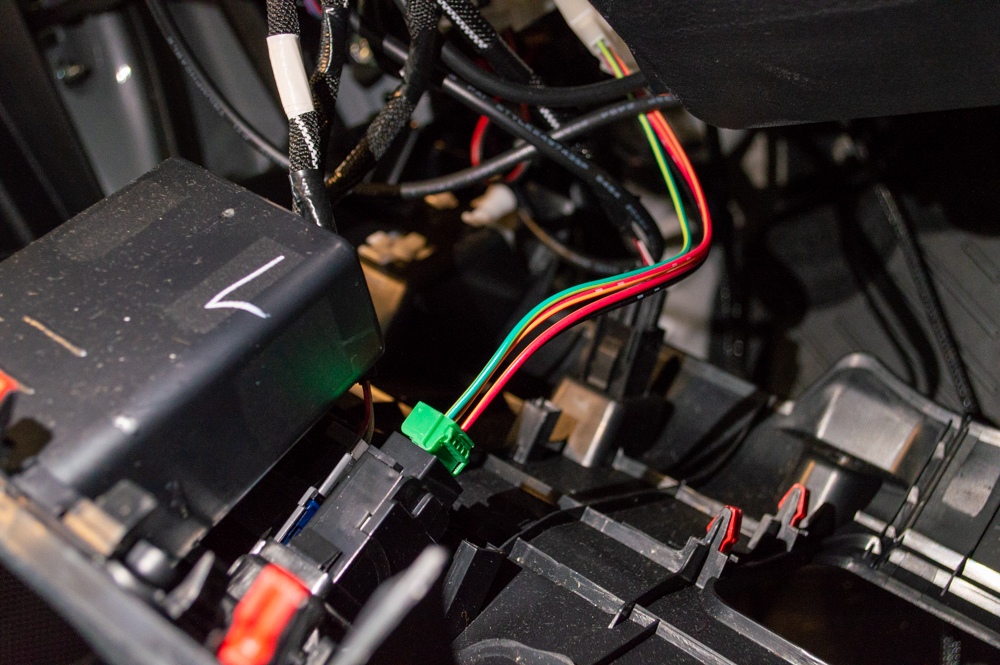 I went with a tall OEM style switch and I still had the stock blank location for that size on the left side of my dash.

You will remove the blank cover by releasing the tabs from the back and pushing the cover through the front. 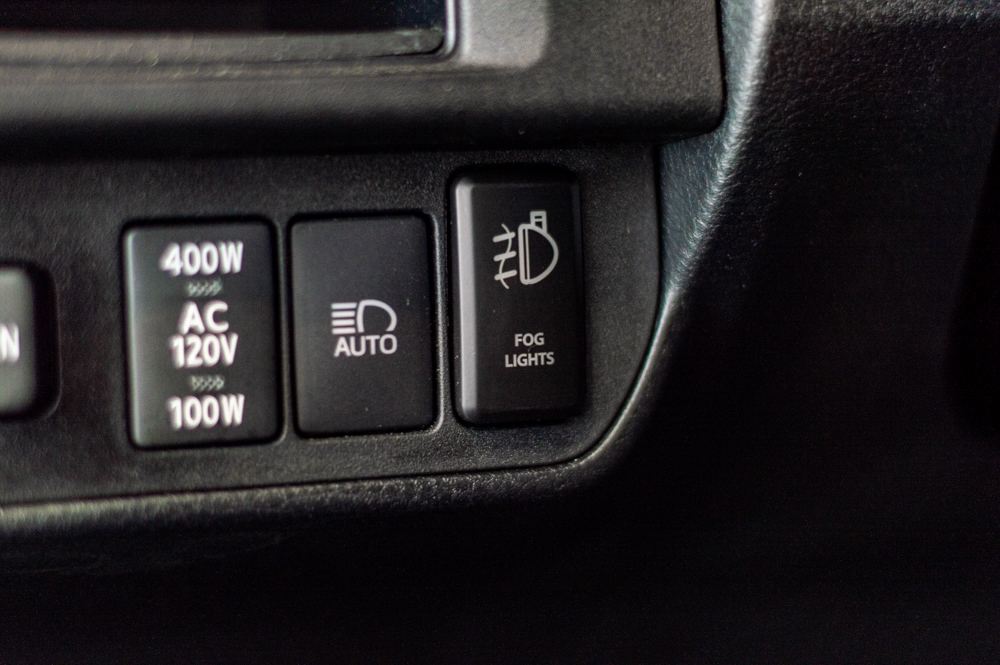 Then, making sure the new switch is oriented correctly, place it into the opening until you hear it click into place. Connect the wire you ran in behind the dash to the wiring on the switch.

Reattach the dash cover along with the two screws and one bolt. I had to really work on the clips around the lower airbag for it to be flush again. 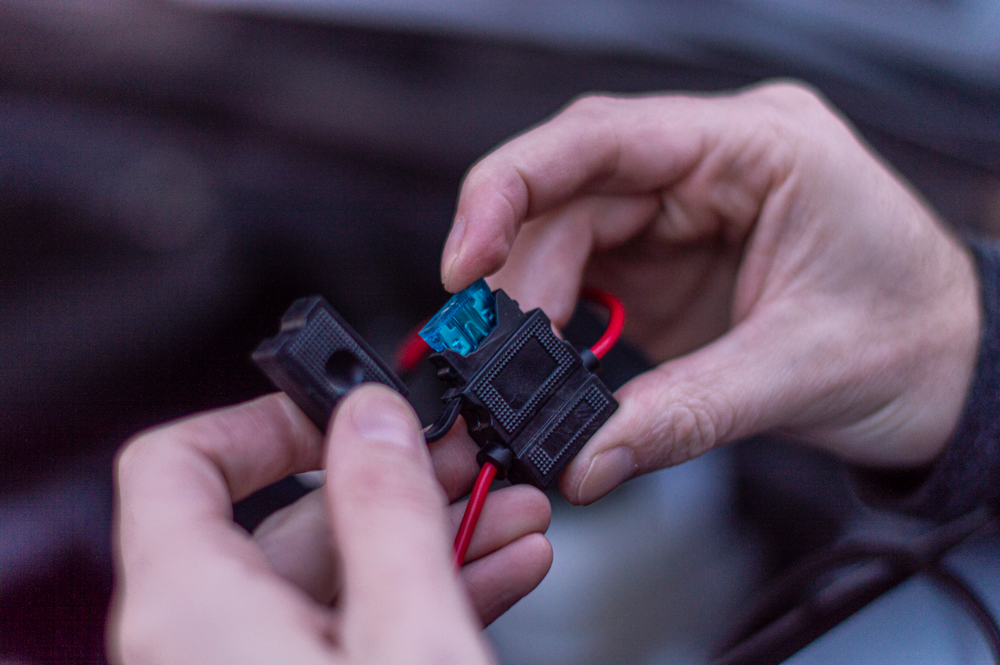 Now that all of the wiring is hooked up, remove the nut on the positive terminal of the battery with the 12mm socket, then place the ring on the positive wire from the Brite Box onto the terminal, and reinstall the nut.

Finally, add the provided fuse into the slot on the positive wire from the Brite Box. You will then want to test to make sure that all your lighting turns on correctly and that your new switch controls the fog lights while your high beams are on. 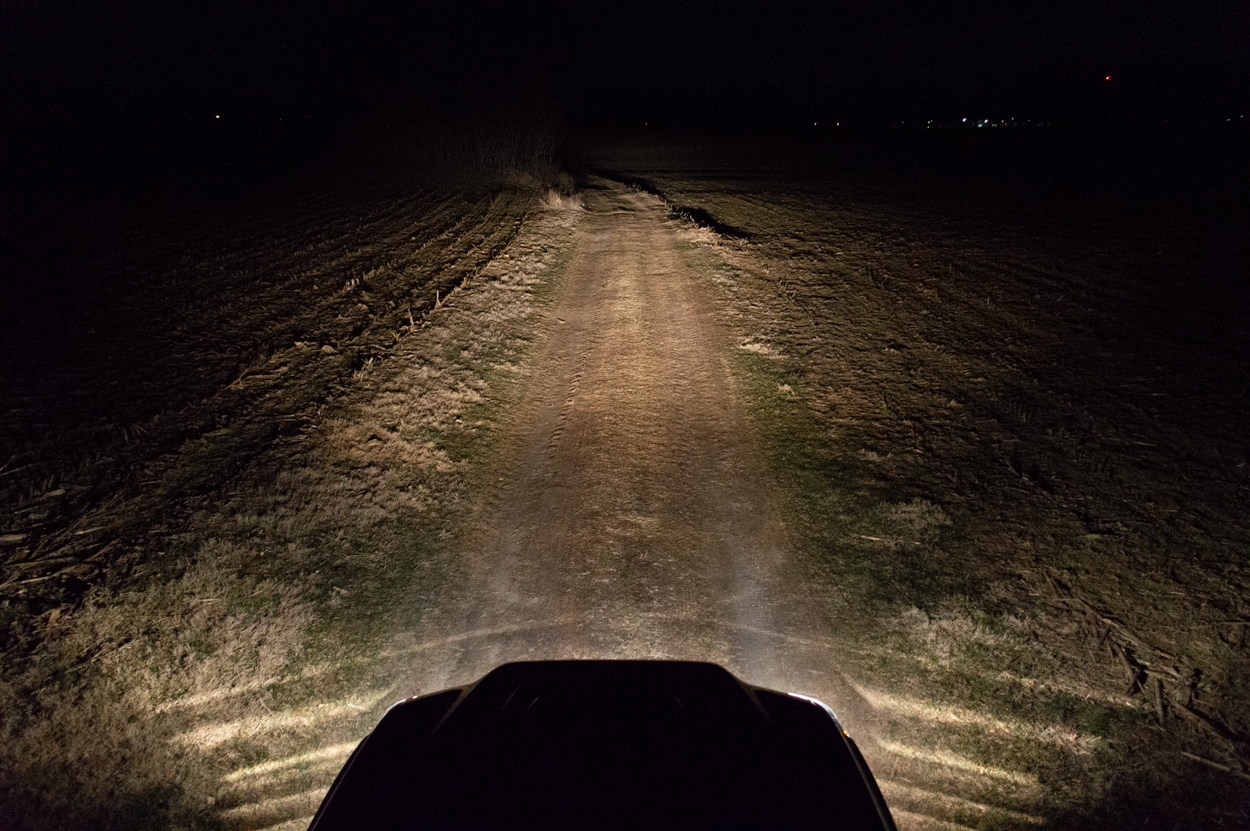 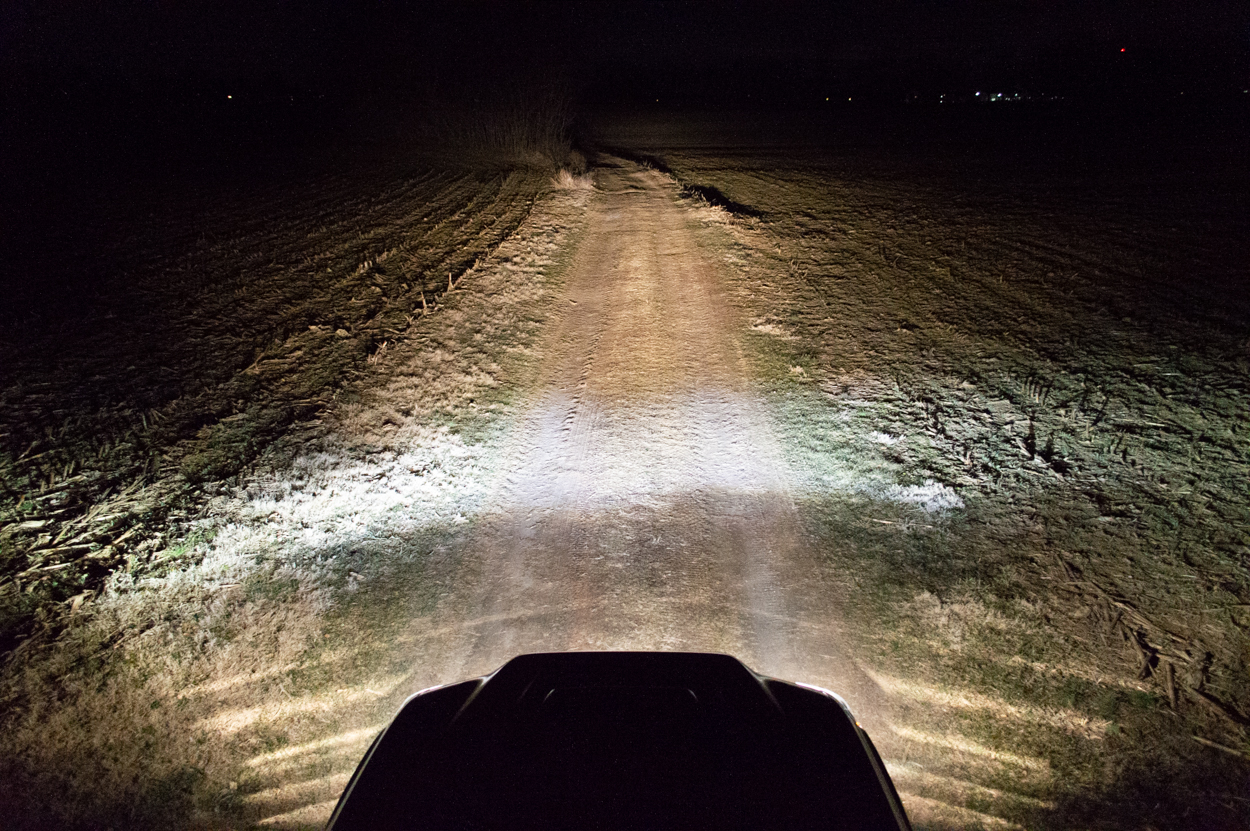 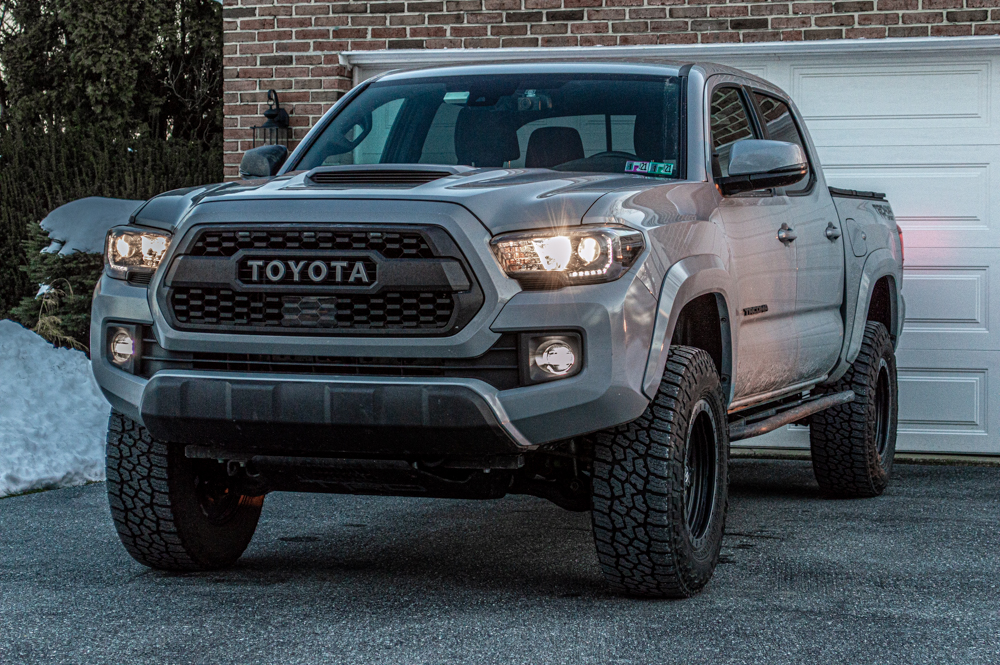 When it comes to a lighting upgrade, it doesn’t get much easier than the Brite Box Anytime. Amazingly, they’ve made their kit completely plug-and-play so you don’t have to worry about cutting or splicing any wires. Just get them into place, plug them in and you’re good to go.

Regardless of where you drive, being able to have full control of your forward-facing lighting will make your drive much safer. This little kit can quickly and cheaply help illuminate the night by utilizing lights you already have! I’d recommend the Brite Box Anytime if you live in an area where you constantly have to worry about animals crossing the road at night and you’re frequently using your brights. 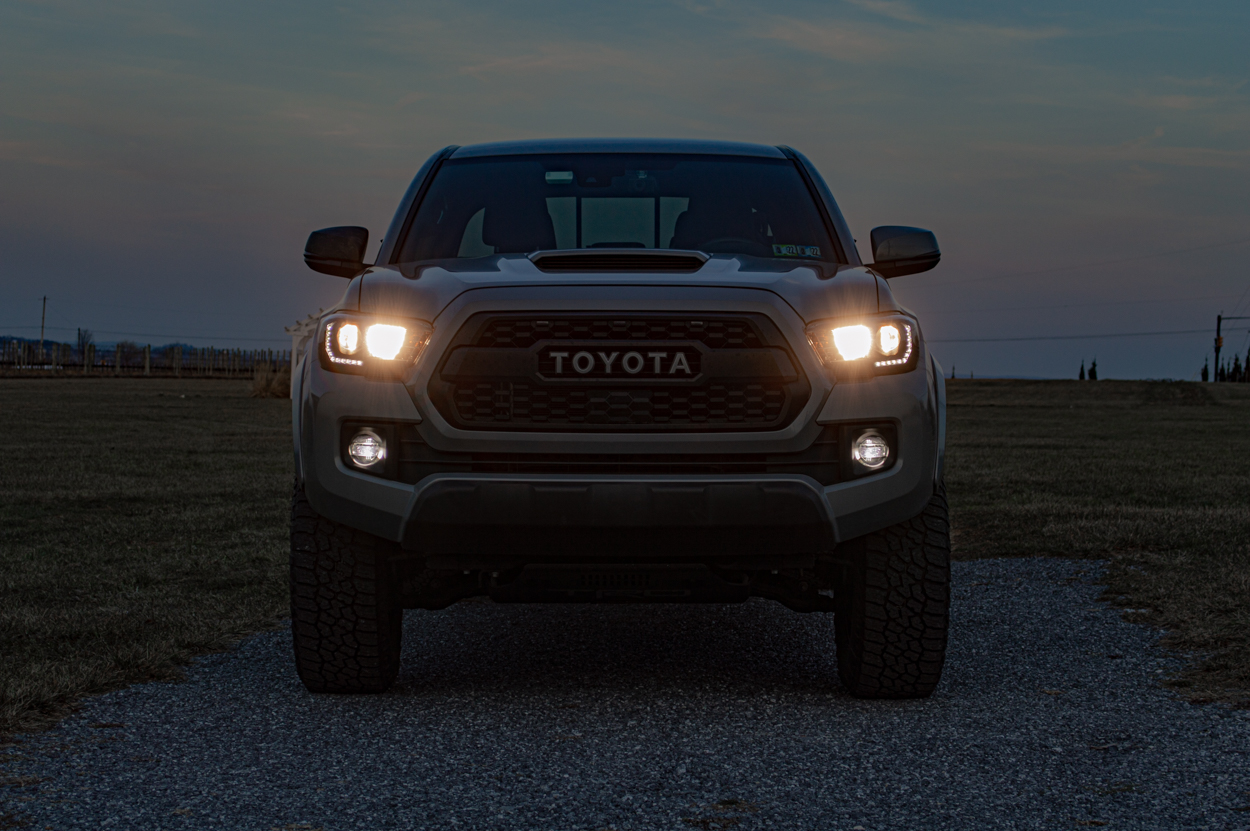 I’d also recommend it if you are an avid off-roader because it adds another option for lighting up your path without needing to find a new location for more lights. They have multiple options for the switch used with the Anytime kit, I chose to go with the OEM style switch and I love it.

It’s great quality, it’s backlit, and it looks like it was meant to be on the dash. All in all, the Brite Box is a really well-designed product that is useful for virtually every type of driver.

I'm a husband and a girl-dad, based out of southeast PA just looking for adventure with my wife and daughter. I've always loved learning how things worked so it's been incredibly fun customizing my Toyotas. I hunt, fish, try to stay in shape, and love spending time with my family.

Will this allow me to turn on my foglights with the headlights off?
Will I retain the use of the fog switch on the headlight stalk?

I’m not sure if all Tacoma models headlight stalks work the same, but I know that I could utilize my fog lights on the second notch, which was still just my DRL and it turned on the rear running lights and inside dash lights. I don’t think the Brite Box overrides anything that would allow you to turn them on without your lights being on the second or third notch. Yes, the fog switch on the headlight stalk still controls the fog lights. If you have the Brite Box switch off, your lights will all work like normal. Once you… Read more »