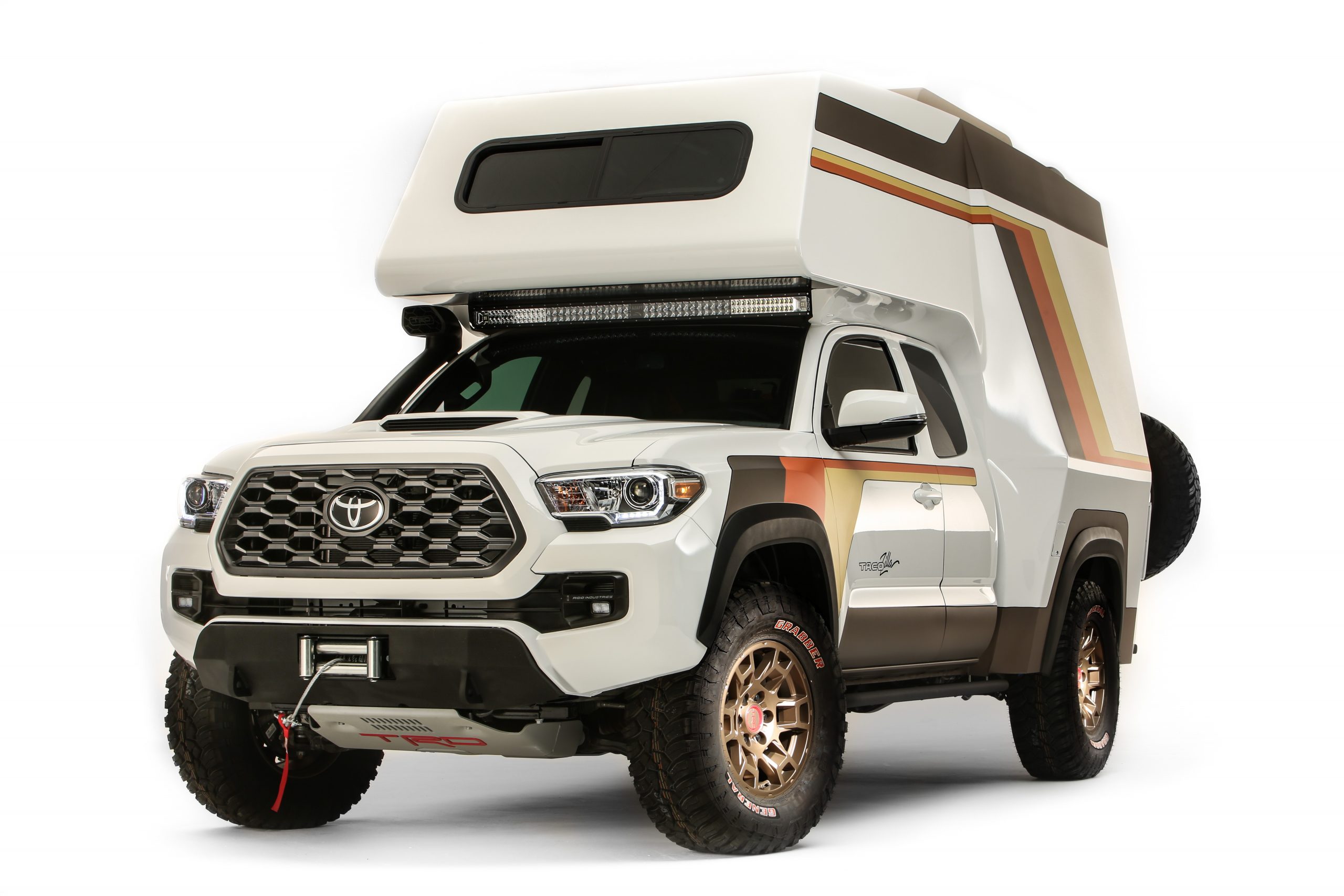 Attendees this year at the SEMA Show in Las Vegas drooled as they walked by the Toyota booth. Sure, the TRD Desert Chase Tundra was a beautiful sight and the TRD Sport Trailer certainly got the adventure blood flowing, but something completely different in the booth caught the eyes of most.

A few years back, Toyota’s marketing department wondered what it would look like if the 1976 Toyota Chinook were made today. Take the growing popularity of Toyota trucks, an increasing desire to reconnect with nature, and the outdoor industry optimizing camping gear daily – it’s no wonder the idea seeped into the minds of Toyota’s marketing brain trust. While it took a few years to get this thought from concept to actual build, Toyota finally made it happen.

Rumored for too many years to count and teased often by Toyota, “TacoZilla” has made its official in-person debut. If you haven’t heard, TacoZilla has been sending waves through the automotive industry (and for good reason).

The History Behind the Build 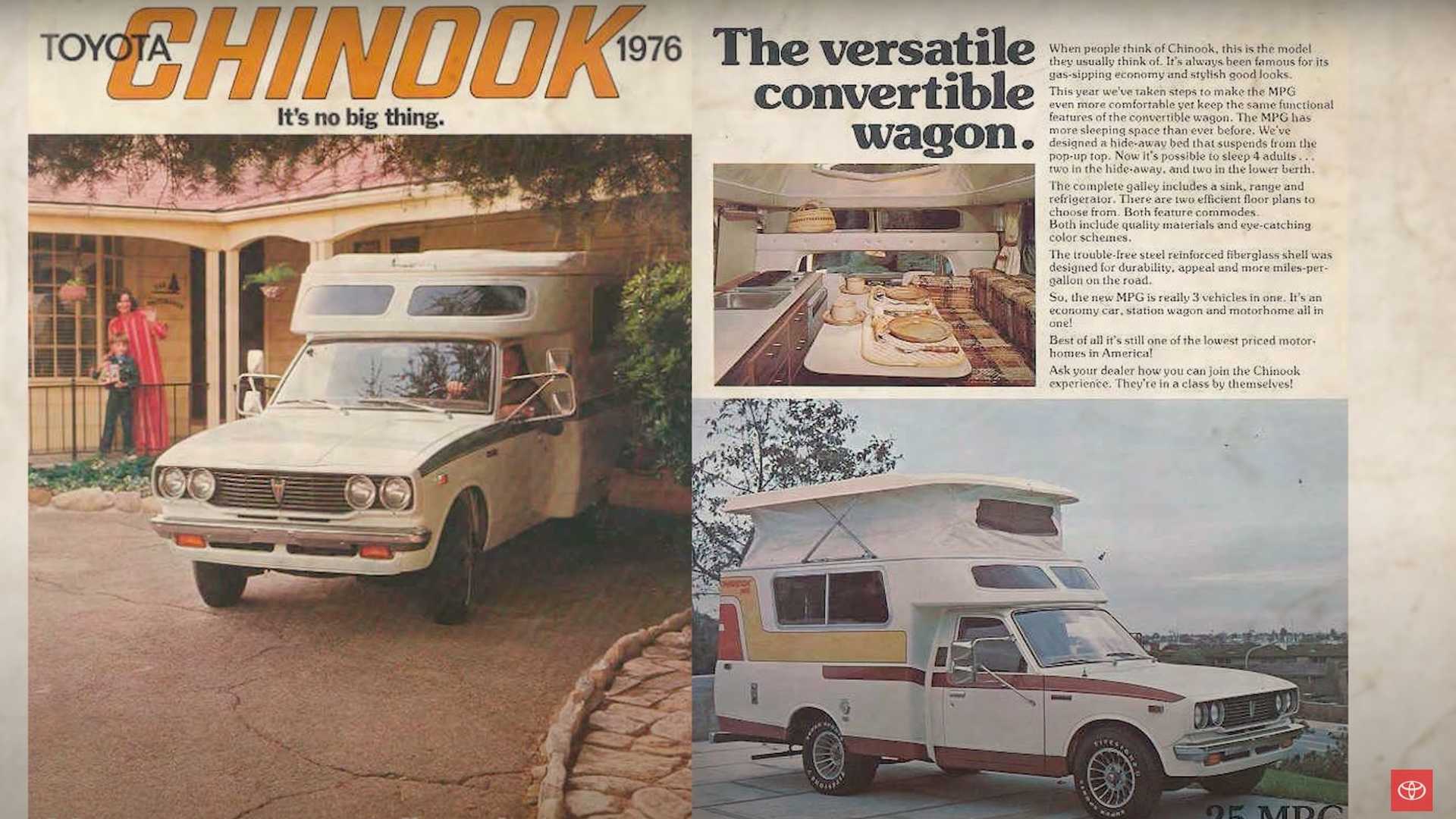 Long before the Tacoma was ever a thought and likely before most of us had a driver’s license, Toyota had been producing smaller trucks.

The major gas crisis in the 1970s forced consumers to find vehicles that could yield better gas mileage. Toyota was well-positioned to deliver on that market demand, but they also saw a growing need in the market for camper vans. As evidenced by today’s overland popularity, that leap for Toyota paid off. 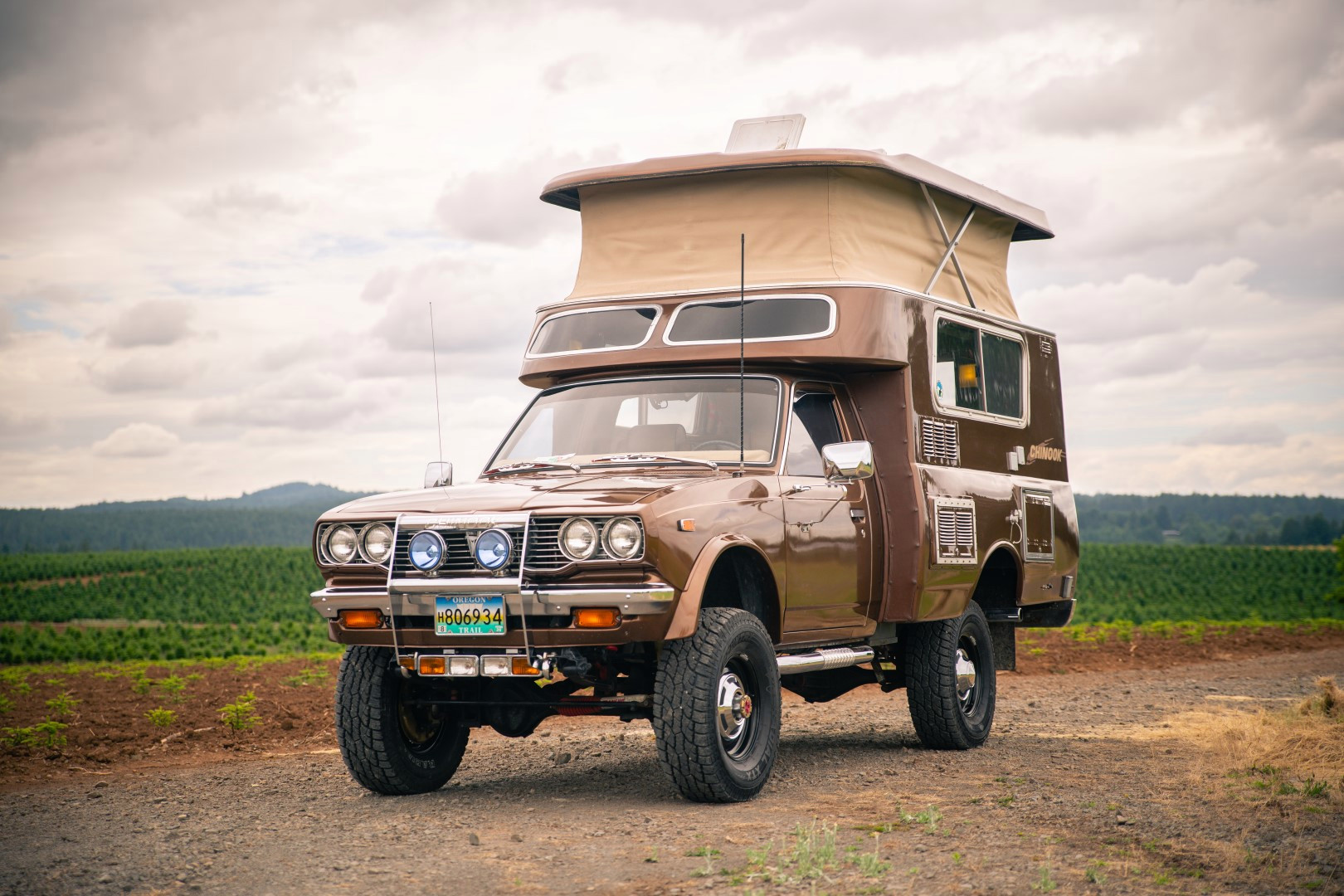 As a result, Toyota entered into a partnership with Chinook, a California-based company known for converting trucks into campervans and motorhomes. Throughout the 1970s and into the early 1990s, close to 50,000 Toyota camper vans were sold including the Toyota Dolphin, the Toyota Sunrader, and the Toyota Chinook. Back then and even today, people refer to camper trucks like this as a “house on wheels”.

The first Toyota Chinook was sold in 1973, it averaged 20 mpg and came in at around $5,000. Remember, it was 1973! At the time, Toyota was producing roughly 300 models per month with features that included pop-up space for additional headroom, a water feed into the camper, storage crammed in every space possible, a step-up rear bumper, an “icebox” (old person talk for “fridge”) and it could comfortably sleep two adults.

What more could you ask for? Almost 40 years later, people are still chomping at the bit to buy an old Chinook and they go for a premium on sites like Bring a Trailer. 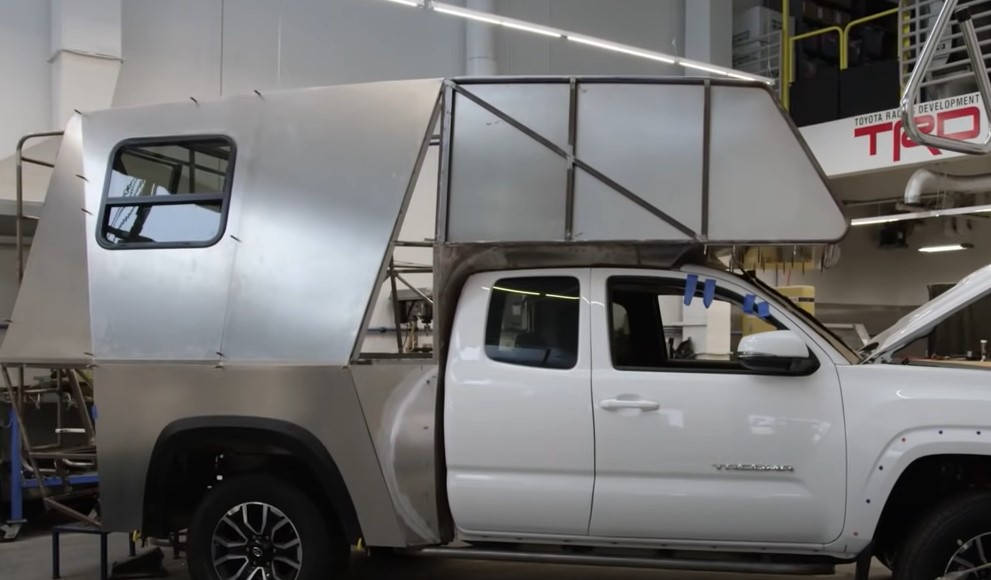 Once the concept was approved, Toyota Motorsports Garage jumped into the project headfirst. The team was based out of the Toyota U.S. headquarters in Plano, TX. Led by Team Manager, Marty Schwerter, and supported by Lead Fabricator, Brad Vetter, the project started to take shape rather quickly with the ever-famous SEMA deadline.

To best honor the original Chinook, Marty and the team decided it was best to start with a 6-speed manual transmission Access Cab TRD Sport as the base for the campervan (similar footprint to the original model). Since this type of vehicle is meant for the outdoors and offroading, Marty felt that the manual transmission was the only way to go, powered by a 3.5-liter six-cylinder engine. 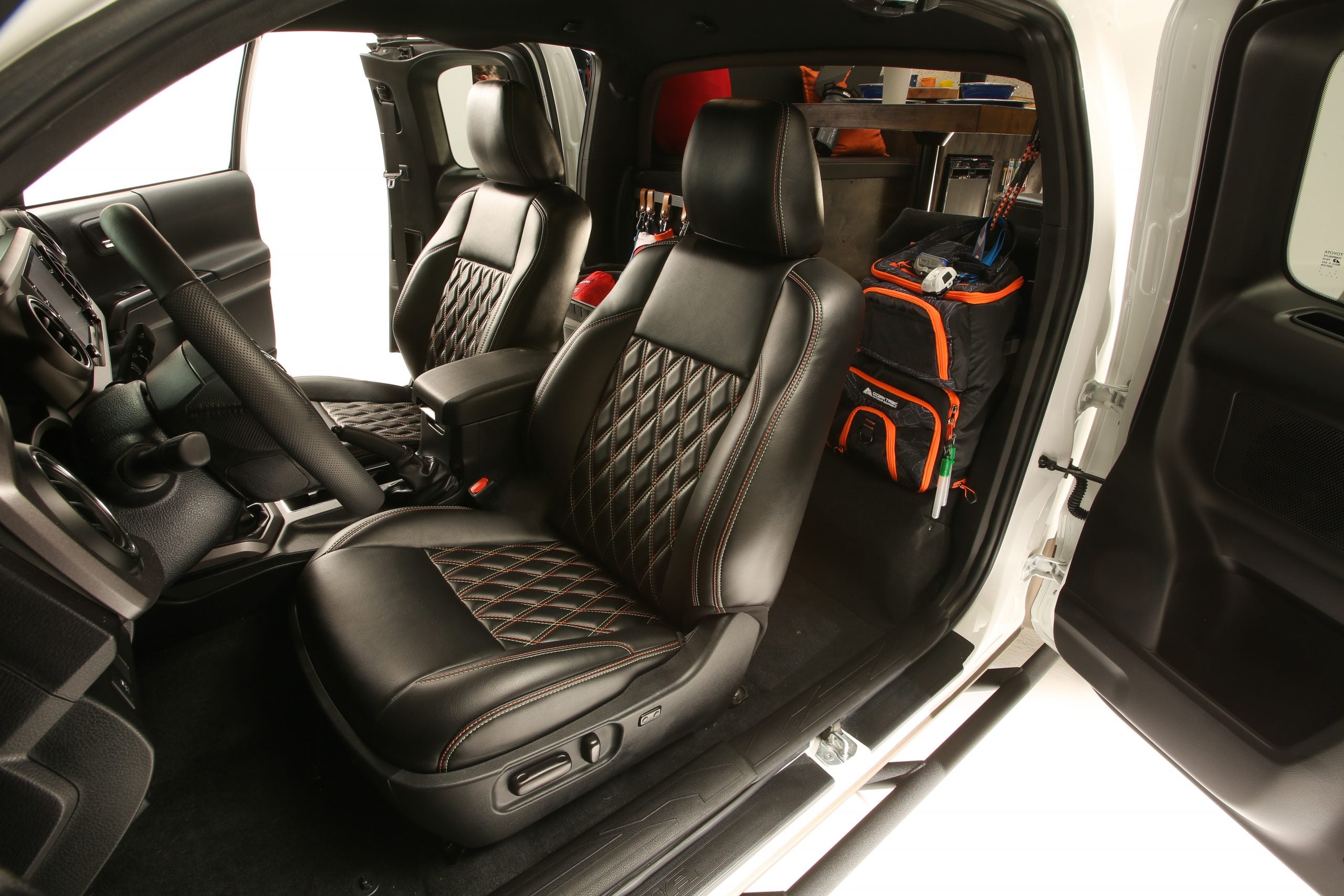 Don’t let the photos fool you; the very first thing the team did was remove the bed and cut an opening into the rear of the cab. Similar to the original model, this opening provides access to the camper from inside the cab and vice versa. One advantage I can think of is not having to pull over to use the bathroom if you’re on the road!

While the gas tank was not relocated, the spare tire was removed from its original spot to make way for additional X-brace framing. The bracing not only supports the weight of the camper but allows it to sit slightly below the frame height. The exoskeleton took shape in just a few weeks and apparently, that’s where the engineering fun began. 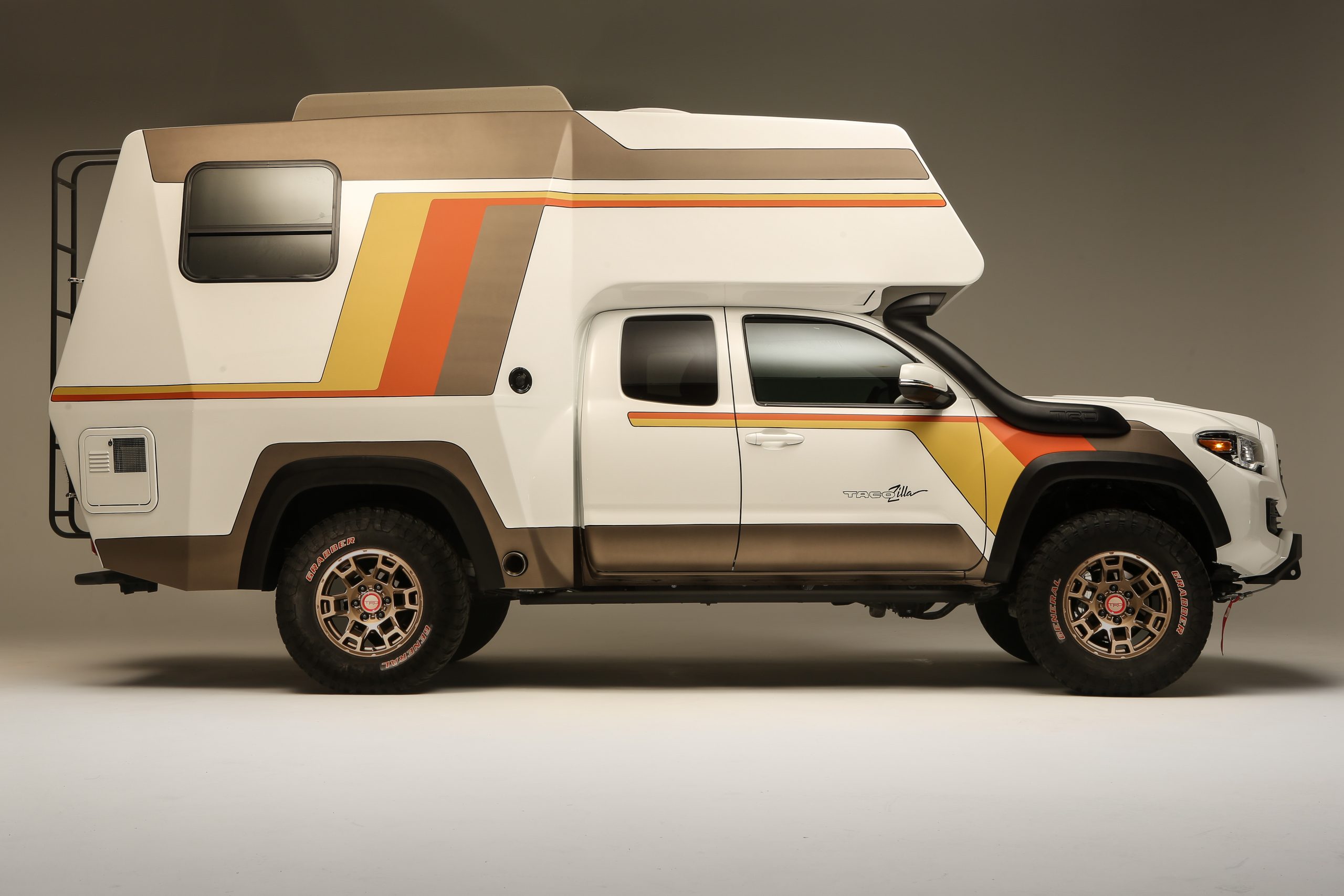 Marty and the team agreed that the most labor-intensive part of the build was how the camper contoured the Tacoma cab.

Throughout the build, the team wanted to ensure that this “TacoZilla” wasn’t just a replica of the original, but one that was modernized with not only new creature comforts but also rounded edges. Behind the cab of the original Chinook, the camper was a bit boxy with sharp edges that did no favors in terms of gas mileage. Both style and advancements in aerodynamics inspired the team to shape the camper to properly address airflow behind the top-mounted lightbar and on the sides. 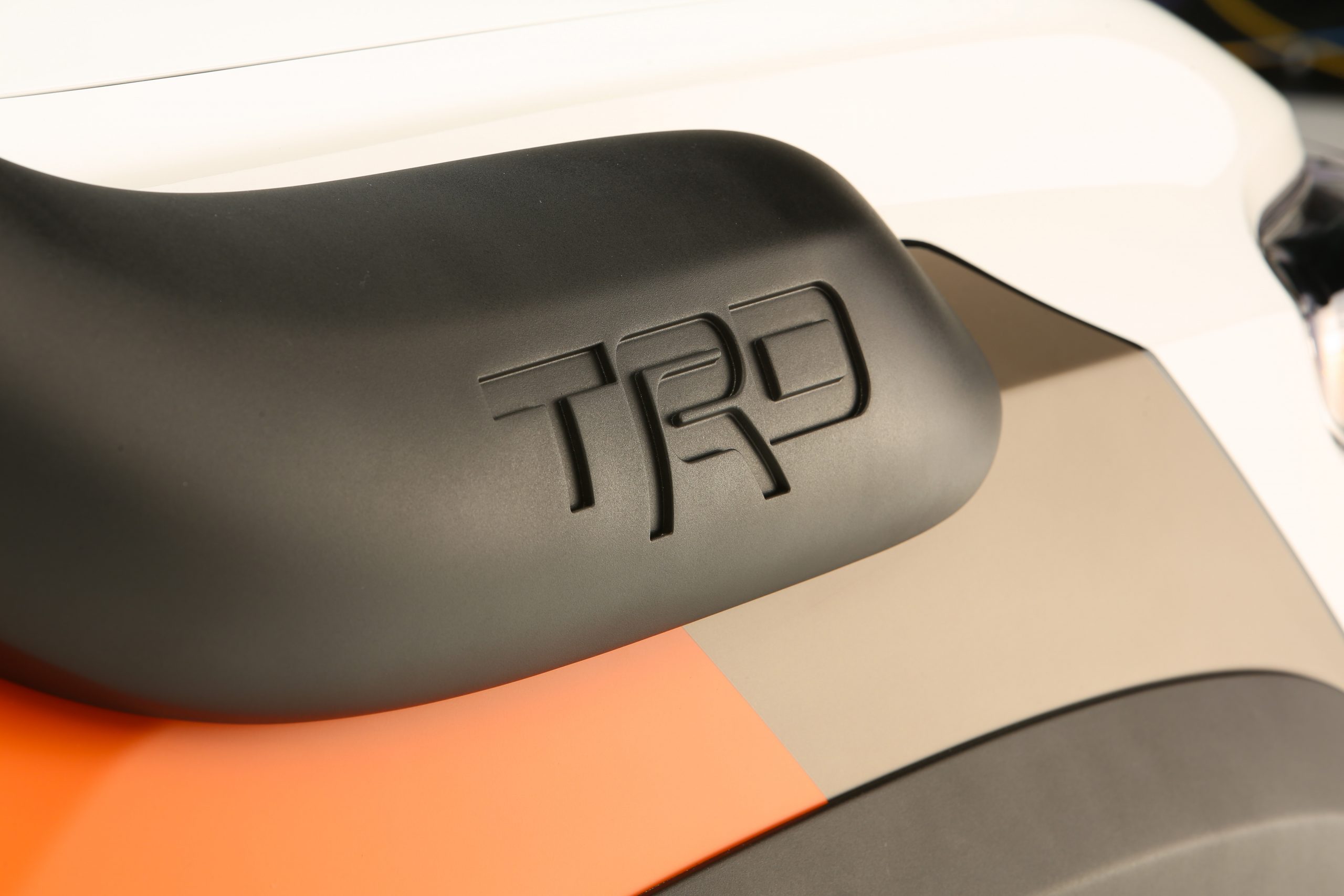 The snorkel itself was modified. While it may look like a bolted-on TRD Pro snorkel, it had to be chopped down a few inches to accommodate the camper overhang on the cab. 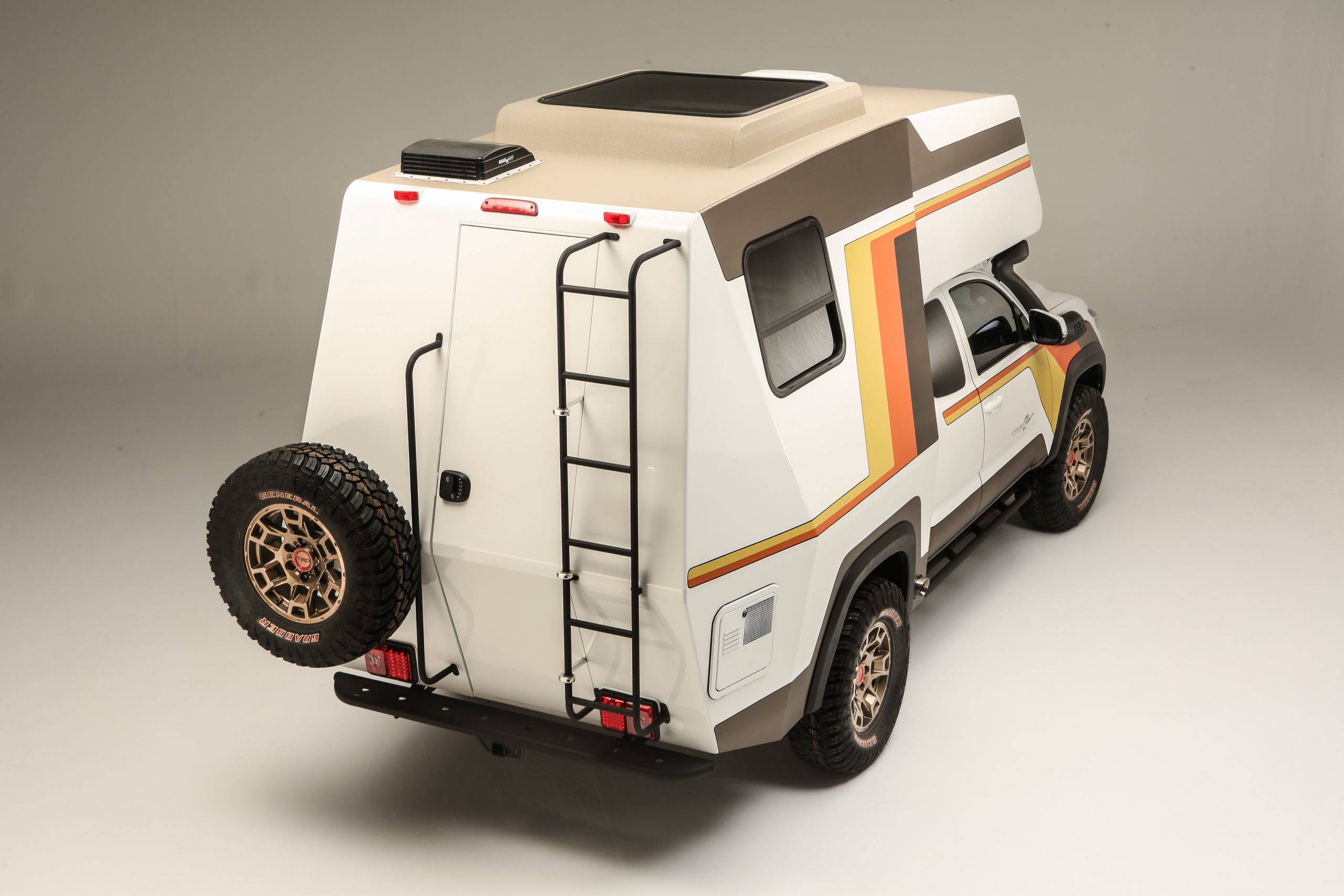 While the TacoZilla began to take shape, the team decided to pay homage to the original pop-up by adding a bubble moonroof. The added space increased the headroom by 6 – 7″ and someone coming in at 6′ 2″ can stand comfortably in the camper.

From an engineering perspective, the most challenging design element was the rear door. Since the camper has an aerodynamic angled rear, the team wanted the door itself to follow the body lines. That’s no easy task, especially when the body of the camper itself is a few inches thick with insulated aluminum panels on the inside and out. Brad shared that the rear door took around 150 hours of fabricating, trial and error.

If the fender flares on the camper bed look familiar, then you know your Tacoma’s. Each fender flare on the rear of TacoZilla is four individual stock Tacoma fender flares fused together, heat-gunned and molded. This was done to carry the same look and feel from the front of the Tacoma to the rear. It’s almost hard to wrap your head around that level of fabricating detail.

Once all of the fabrication work was done, that’s where the real fun began. Complete Customs, a well-trusted partner of Toyota, handled all of the bodywork, paint, and final touches for the TacoZilla. One can’t go without noticing the 3-tone tribute to the original Chinook as it’s adorned with similar retro stripes. While that color combo has tones taken from your grandparents’ kitchen wallpaper, it still looks fresh. 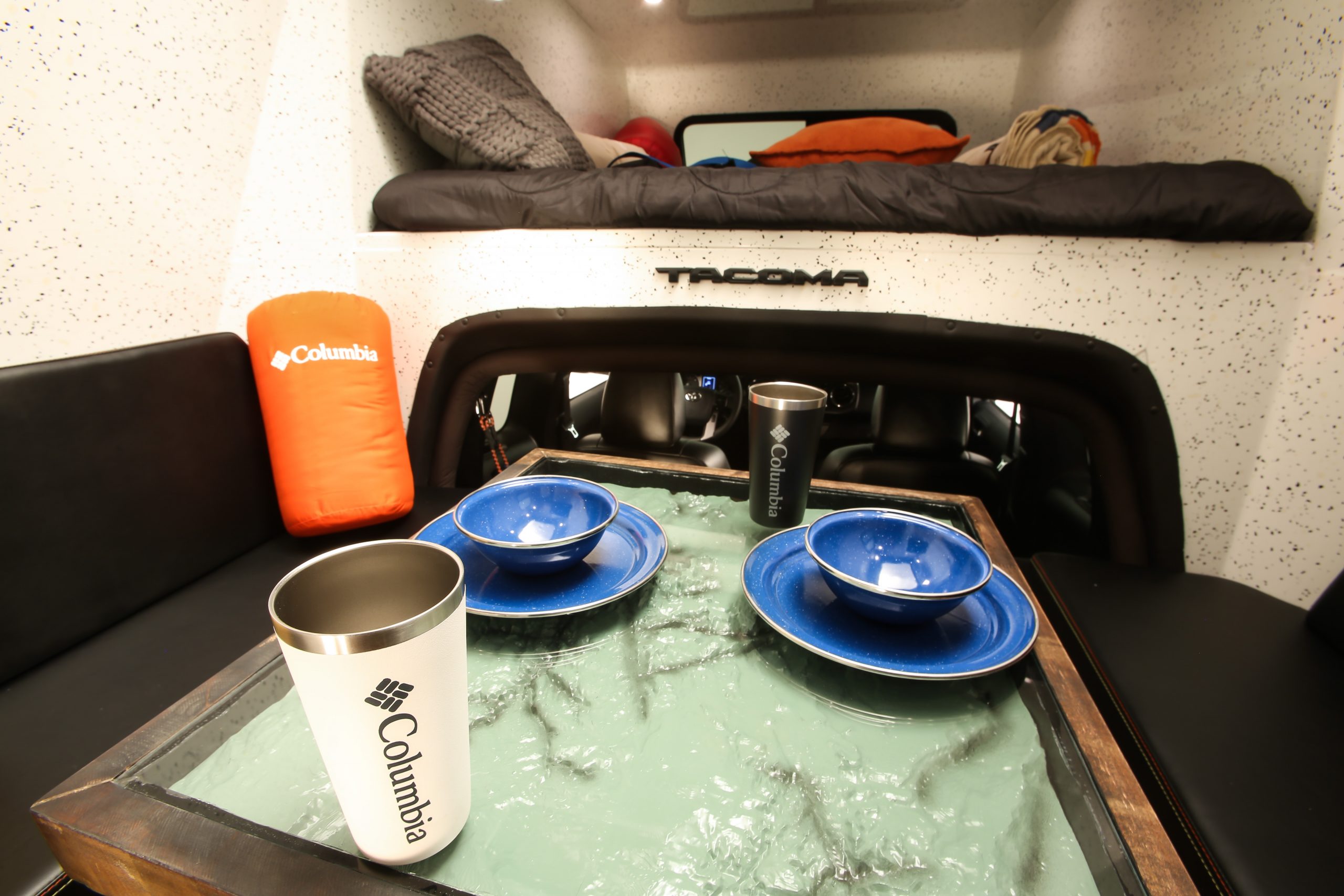 So, what did the team pack into the camper? A lot, but let’s start with the subtle details.

If you’ve ever gone camping, there’s a good chance you’ve come across an old-school enamel-speckled mug. That speckled finish screams “It’s cold and I’m drinking hot coffee at camp” (maybe even with a shot of whiskey). So, what better way to deck out the interior of the TacoZilla than with a similar finish? White with black speckles, the interior brings you that much closer to the feeling of being at camp.

The flooring throughout the camper features water-resistant teak wood, bench seating, and a small kitchenette. One of the cooler features is the eating table/workstation.

The table itself is removable, like most camper tables, but this one has a 3D printed topographical map of Zion National Park. Pretty rad, but what makes it even more special is that the removable tabletop serves as illuminated wall art when not in use!

If the design elements weren’t enough, TacoZilla has a commode/shower with a built-in exhaust fan, a 9-gallon “gray water” tank, and a 20-gallon freshwater tank. What looks like an additional gas cap on the side of the camper is a fill-up cap for water.

The camper also has a built-in Dometic fridge (a modern-day “icebox”), storage throughout, a flat-screen TV, and an upper sleeping area fit to comfortably sleep two adults. If these creature comforts aren’t enough for you, then you’re just not meant to camp. 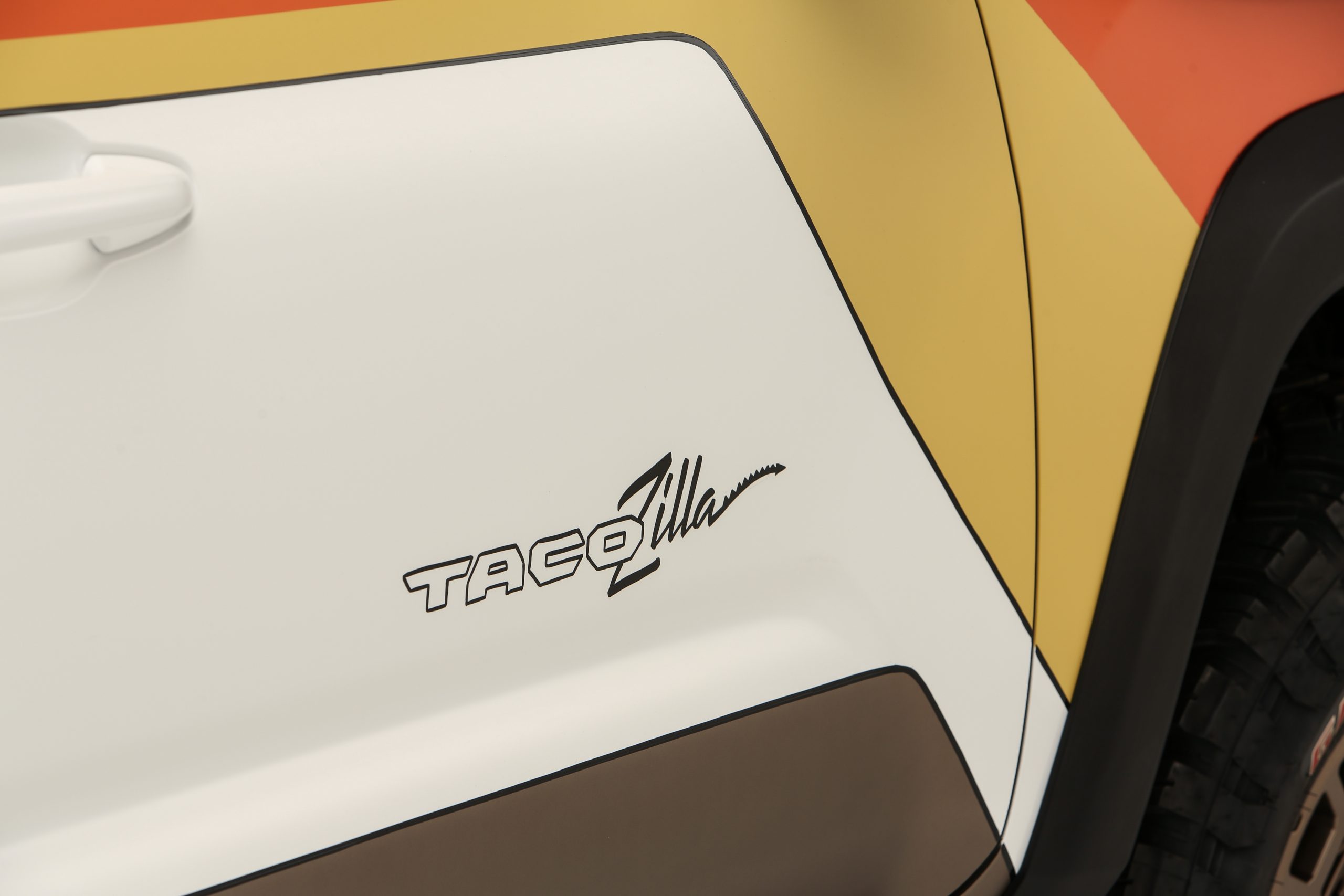 It goes without saying, the Toyota Motorsports Garage team knocked it out of the park with this modern-day approach to the original Chinook. It packs in everything you could want from an overland rig and then some.

Sadly, TacoZilla will likely never go into production with all signs pointing to this build being a one-and-done project. But, is it inspiring to those looking to build out their rig? What would you take from the TacoZilla project and adapt for your own Tacoma? What did you like best about this build?

I'm a writer and editor for Trail4Runner and TrailTacoma, a native of Philadelphia, and I can smoke meats with the best of them. Follow my articles for honest feedback and guidance on where to go with your next mod.

Much more like a Toyota Sunrader than a Chinook. A Sunrader is a Chinook without the pop-up tent.

We just wanted to highlight a cool Tacoma. I’m sure you could commission the right company to do something like this.

Damn! I was getting ready to order one. That is soooo rad and I always wanted a Chinook.

Im lookin to add something like this to my tacoma. Is there a place i can buy one?

So if I approach these people with a white Tacoma and and deep pockets?

Considering this is Toyota that we are talking about, it still might be tough. But maybe a builder/fabricator could do it!

Great article but I’m disappointed it won’t likely be going into production. Not sure there’s much I would change, love the retro look and the modern features. And a Standard Transmission, are you kidding? Come on Toyota, make the TacoZilla!!!!!

For real! We need more vehicles like this. But at least there are plenty of dialed campers you can buy!

But….but….but….this is exactly what I’ve been looking for.

where can we buy one or can we special orderone.

Not for sale. Concept only.

is it true that this won’t be available?

Great post! There’s so much history behind the truck camper design, it’s great to see Toyota branching out with projects like this and the Baja 2022 Tundra.

Seriously. I was just taking a second look at this post and I was taken in by the retro shots. Things have come a long way!

How much over GVWR?

Not sure. Did they ever post those kind of specs? It’s a one off build, so weight was probably not a factor haha. 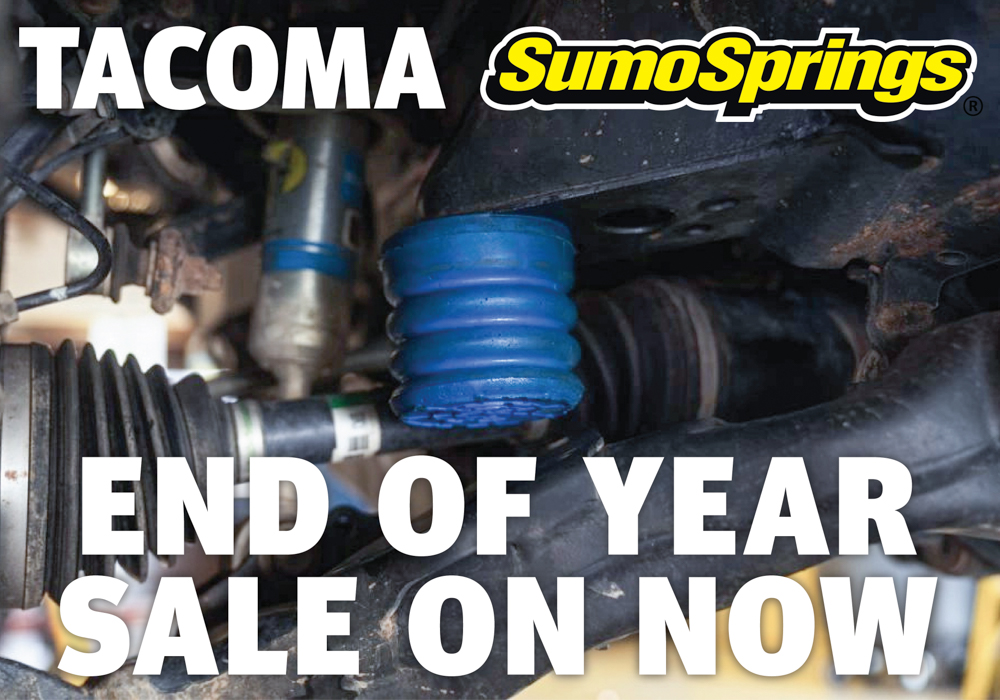